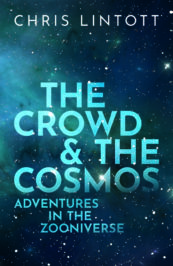 The Crowd and the Cosmos: Adventures in the Zooniverse

When did you last look up at the night sky? Before the advent of streetlights, paying attention to the heavens above us would have been an everyday part of existence, as commonplace as noticing the weather. Now, as many of us hurry from brightly lit office buildings to the cosy lights of home, few remember to look up and notice the celestial spectacles above our heads. Stargazing – if it’s thought of at all – is regarded as something left for a bucket list trip; it’s a special evening spent under the dark skies of New Zealand, or a chilly cruise to northern Norway to see the Northern Lights. A once in a lifetime treat, not part of our real lives.

It’s true that the wonder of a truly dark sky, where the stars are so numerous that the gaps between them seem to disappear, is worth seeking out. But even in urban settings, in the middle of lives lit by the glow of screens from dawn to dusk, I recommend taking the time to look up now and then – there’s much to see. Take the Moon, for example. Noticing its changing phases helps marks the passage of time, and there’s a satisfaction in spotting the thin crescent of each new lunation against a twilight sky.

I’m writing this the morning after a night brightly lit by September’s full Moon, which seemed to shrink in size as it rose up, away from the horizon. This curious effect isn’t astronomical, but rather psychological. Our brains and visual system aren’t good at dealing with distances, and so when the Moon is low, a comparison with nearby objects makes it seem enormous. The full Moon can be covered by a pea, held at arm’s length (an experiment I recommend), but it’s incredibly hard to convince yourself of this fact when it hangs heavy and low over the skyline.

Having started to notice our celestial neighbour, the next stage is to watch how it changes. The line dividing bright and dark parts of the Moon represents sunrise or sunset on the lunar surface, and as the shadows lengthen, different features can look surprisingly prominent. At full Moon, for example, look for the bright rays that lead away from the crater Tycho, which stand out under the overhead Sun.

If connecting with the Moon isn’t personal enough for you, a more human connection to space is available. The International Space Station passes over the UK at least a few times every month, appearing after sunset or before dawn as a rapidly moving bright star, taking perhaps 90 seconds to cross from one side of the sky to another. Though a multitude of satellites can be seen crossing the sky on any given night, there’s something special about waving at this small outpost of humanity as it carries its crew of astronauts rapidly overhead.

Look further afield, and the slow turn of the Solar System’s gears becomes visible. Venus, Mars, Jupiter, and Saturn are all, at times, brilliantly visible; each can shine brightly enough to be seen from even the most light-polluted location. Start paying attention to them and the routine of Earth’s daily grind can seem to disappear for a moment into the long time of the cosmos. It’s that feeling – of reducing ourselves and our problems to just a small speck in an infinitely grand whole – that even city-bound stargazers reach for, and to my surprise, it’s also available online…

When we launched the Galaxy Zoo project on the Internet in 2007, we were thinking of astrophysics, not of connecting to the cosmos. The project, which still runs today, asked people worldwide to log in and help in classifying galaxies, sorting them by their shapes, which in turn reflect their histories. Hundreds of thousands of people flocked to our aid, and some came for surprising reasons. When we carried out a survey, a significant number of participants in the Galaxy Zoo project told us that they were seeking a way of contemplating the vastness of the Universe!

Over the years since that initial project, we’ve turned Galaxy Zoo into the Zooniverse, a collection of projects that ask volunteers to do everything from counting penguins to transcribing ancient papyri. Despite the obvious appeal of Disney-friendly animals like penguins, the astronomical projects on the Zooniverse remain our most popular. As an astronomer, I’d like to believe that’s because of the passion with which my colleagues share their excitement about our subject, or because I find it hard to imagine that anyone wouldn’t be interested in spotting a distant star’s supernova explosion, or spending time exploring the stellar nurseries in our galactic neighbourhood. In reality, though, I think these projects reach back to the same instinct that leads many of us to look up when leaving a building after sunset: spotting something that reminds us of our place in the cosmos – whether in the sky or on the screen – provides a jolt of cosmic perspective you just can’t get any other way.

Chris Lintott is a professor of astrophysics at the University of Oxford, where he is also a research fellow at New College. As principal investigator of the Zooniverse, he leads a team who run the world's most successful citizen science projects, allowing more than a million people to discover planets, transcribe ancient papyri, or explore the Serengeti. For this work he has received awards from the Royal Society, American Astronomical Society and Institute of Physics among others.