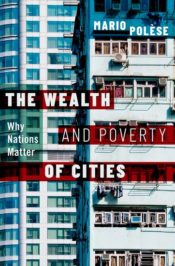 The Wealth and Poverty of Cities

Housing has become unaffordable for all but the lucky few in many of the world’s great cities. Who can afford to live in New York or Paris? Yet, housing prices can be kept in check. Some cities have succeeded in doing so, as we shall see. The secret is simple: housing supply, which can be stimulated or thwarted by public policy. Basic economics teaches us that rising demand (say for bread) in the face of inadequate supply (of bread) will inevitably lead to higher bread prices. Housing is no exception. The answer, thus, if we wish to keep prices down is to provide more housing. That indeed is the right answer; but easier said than done. For bread, the normal workings of the market (bakers making more when demand increases) will keep prices in check.

Housing, on other hand, is rarely produced under normal market conditions. Housing as well as the makeup of the neighborhoods we live in are highly sensitive issues that directly affect our well-being. Almost all nations have laws and regulations that govern what can be built where; which is why zoning ordonnances exist. No one wants a waste dump next door or a high-rise blocking out the sun. How housing markets are regulated varies greatly across nations, reflecting national conditions and tastes. High housing prices in many rich-world cities, not least in the United States, are largely self-inflicted, the result of public policy.

The rationale behind many restrictions on housing supply are entirely understandable, heritage protection a common objective in Europe, Paris’ urban planning regulations prohibiting buildings above a certain height a typical example, but which in essence freeze supply, rising prices the inevitable outcome. The roots of America’s housing crisis, especially acute in West Coast cities, are more complex (geographical constraints aside) and also more difficult to remedy, the outcome of a tradition of urban governance and development that privileges local democracy and single family homes. Local democracy is certainly laudable; but has all too often resulted in local residents, via referendums or other means, blocking zoning changes that would have allowed denser residential construction. The parallel proliferation of single-family home low-density neighborhoods, which residents are loath to alter, is the outcome of over sixty years of car-oriented development, difficult to reverse. America’s path to affordable housing will not be easy, requiring changes in how American cities are governed.

However, affordable housing is not an unattainable goal. Vienna in Europe and Montreal in North America have systematically kept housing prices (both rental and owned) below those of comparable sized cities in their respective continents. The two cities have chosen different paths. Housing can be produced by the public sector or by private builders. Vienna chose to privilege the former. Following in the footsteps of 1920s Red Vienna, the City administration with federal support has consistently financed the construction of housing, often via non-profit builders associations, public housing accounting for some two thirds of the market, in turn keeping private sector prices in check. Montreal, on the other hand, has chosen to facilitate market entry by private contractors, keeping charges and planning constraints to a minimum while at the same time enforcing mid and mixed-density zoning, resulting in a generally flexible (elastic) market in which triplexes, duplexes, and other mid-range housing is the rule. Montreal stands out in North America in not imposing impact charges on developers, public infrastructure costs shared by all taxpayers, thus facilitating the entry of small players and ensuring a more competitive market.

The accounts above are necessarily brief (this is a blog, not an academic treatise). However, the lesson from Montreal and Vienna is clear. The road to affordable housing requires either sufficient public financing of housing construction to ensure continued supply or a regulatory environment that ensures a competitive, flexible, housing market. If neither is forthcoming, the outcome is predictable.

Mario Polèse is a professor emeritus at INRS, Montreal.