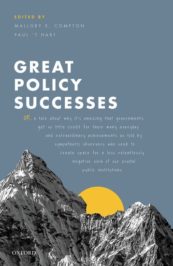 For those who follow the news, it is all too easy to form the impression that governments are incompetent, slow, inefficient, unresponsive to ordinary citizens’ needs, and prone to overreach and underdeliver. Easy, since Brexit is currently the public’s main measure of the competence of government. And yet across many public policy domains, for most of the time, the bulk of public projects, programmes and services perform not so badly at all. And in some instances they do spectacularly well. Sadly, these rarely receive attention. We tend to look only at the negative, and that doesn’t always help us understand what is possible in the future, either in policy making and even as citizens – we hone in on failure, not on the possibilities that lie ahead, and we don’t value learning from success. Instead, the media, political and academic discourse is saturated with accounts of public policy shortcomings and failures.

There is a considerable risk that this institutionalised focus on endemic failure produces a learned myopia in how we observe, debate, and assess our systems of governance. As public policy researchers, we need to shift the focus. We need to transform how we teach, research and discuss policy making – by seeking to learn as much from positive outcomes as we do from failures. A few great examples of public policy successes include:

Norway’s policymakers purposefully dodged the resource curse bullet and channelled its oil revenues into what has become the world’s biggest national pension fund.

The world managed to negotiate and implement a global regulatory regime that helped the ozone layer recover from the damage caused by decades’ worth of ozone-depleting substances.

The transformation of UK tobacco control

The UK designed and implemented innovative policies that framed tobacco as a health concern in order to build support for the initially unpopular tobacco ban.

Studying cases of failure can help us diagnose the causes of policy shortcomings. The lessons learned from such work can – hopefully – be used to avoid similar disappointments or crises in the future. Studying great policy achievements, on the other hand, allows us to identify the circumstances conducive to success.One key lesson is that pacing the work of change is a fine art. In many cases, there was extensive consultation, bargaining, and negotiation, over many years. For example, Copenhagen’s now highly successful urban planning regime has evolved over half a century. The revitalisation of Melbourne took shape over two decades. These were iterative processes.

Secondly, strategic politicisation and top-down leadership can help – sometimes. Tony Blair’s public commitment and personal resolve to reduce NHS waiting times is an example of the politicisation of the status quo in a policy domain providing momentum for change. But top-down political willpower isn’t always enough. Faced with an existential challenge – how to ensure there is still a country left to inhabit if sea levels rise and the rivers swell – the Dutch government turned depoliticisation into an art form. It empowered a studiously apolitical authority to tap local knowledge and forge broad support for smart and pragmatic solutions.

Thirdly, many cases were marked by judicious use of inclusive and exclusive participation strategies. In consensual democracies such as Denmark and the Netherlands, inclusive consultation, deliberation and codesign is second nature to policymakers and offers a reliable solution to what could easily become political deadlock. But even in less consultative political systems, such as Australia’s, it was the incorporation of grassroots voices and initiatives into the Melbourne regeneration policy mix that enriched its substance and broadened its support base. By contrast, New Zealand’s remarkable economic turnaround in the mid-1980s and early 1990s was engineered by a relatively closed circle of politicians and Treasury bureaucrats, working in what was a strictly majoritarian and unicameral political system.

How can we improve the odds of public policy success? There are some who claim to have on universal answer to this question, advocating one-size-fits-all recipes such as evidence-based policy, behavioural economics, or codesign. They should think again. There are many different pathways to successful public policy, including: a confluence of seemingly disparate initiatives across different domains; alliances between strange bedfellows; or knowing when to push forward and when to wait. The challenge is to sort out what combinations of design practices, political strategies and institutional arrangements are both effective and appropriate in the context at hand – because we’ve seen that there is no best way to achieve policy success. Talking about what went wrong and dressing up evidence about what will work better is appealing and even vote-winning, but it is rarely a good idea.

Image credit: Houses of Parliament by luxstorm via Pixabay

Mallory Compton is a postdoctoral researcher at Utrecht University School of Governance, which she joined after obtaining a PhD from Texas A&M University.