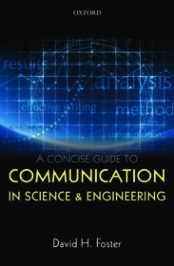 A Concise Guide to Communication in Science & Engineering

Why do academic writers announce their plans for further work at the end of their papers in peer reviewed journals? It happens in many disciplines, but here’s an example from an engineering article:

There are several possible explanations for this practice. One is that it’s a continuation of a discussion between author and colleagues—participants in a society meeting, conference, or research network.  Another is that it’s a response to a reviewer’s critique of the submitted paper. To secure its publication, the author promises to remedy its defects in future work. Yet another is that it’s simply promotional—an advertisement of the scope of the research, its importance to the field.

To be clear, none of this refers to suggestions in an article to benefit research by the larger community. For example, an author might suggest new lines of investigation or potential confounds in experimental practice, here in a study of mental health problems: “Depression, too, can be heterogeneous . . . and future work would be wise to consider such variation.”

In contrast, an author’s announcement of his or her intentions can present readers with a dilemma. Should they restrict their own research to avoid duplication or, more drastically, turn to a different area of study? As Vernon Booth noted in his prize-winning booklet Writing a scientific paper, published in 1971, “An author who writes that an idea will be investigated may be warning you off [his or her] territory.”

Suppose, though, you’re committed to the territory. Should you accelerate your efforts to avoid being overtaken? Or continue at the same pace and assume that duplication is unlikely? Or should you exercise patience and wait for the follow-up publication to see what emerges? If you do wait, where should you look and for how long? Or should you simply ignore the announcement? After all, the author may never publish again. He or she may have promised too readily and not thought through what was entailed, or having done so, loses interest, or for other reasons disengages from the field, or from research more generally. And of course it’s possible that the announcement was meant only for effect, an empty version of the warning described by Booth. Parallels can be found in the software industry’s promotion of what became known as vapourware—advertised products that didn’t exist and were never likely to.

Curiously, the act of rounding off a paper with an announcement has a remarkably long history. Here’s an example from about 350 years ago: “And the next time, we hope to be more exact, especially in weighing the Emittent Animal before and after the Operation.”

And another from over 150 years ago: “We hope shortly to be able to prepare some pure cobalt and nickel by depositing galvanoplastically those metals in the form of foil from solutions of their pure salts.”

And another from about 50 years ago: “Quantitative results regarding these phenomena have been obtained and will be published in due course.”

In fact, this last example, which a colleague helpfully identified, is from one of my own publications, a note published during my thesis studies.

Nevertheless, it’s difficult to justify the inclusion of such material in papers now. In his booklet, subsequently revised and republished, Booth said that promises should be offered sparingly. The advice was probably too gentle. Whether they’re about future publications or research, it’s best to avoid statements of intent altogether. They can prove a challenge for the reader and, just occasionally, for the author too.

David H. Foster is professor of vision systems at the University of Manchester and formerly director of research in the School of Electrical & Electronic Engineering. He has served as journal editor or editor in chief for over thirty years. He is the author of A Concise Guide to Communication in Science and Engineering.