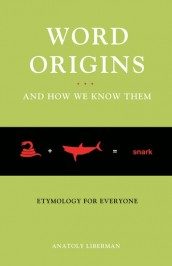 This post owes its existence to a letter from our correspondent, who was surprised to discover that dictionaries call the origin of the word smell unknown. Not that two and a half pages later this origin will become “known,” but the darkness around it may become less impenetrable.

I have more than once discussed the mysteries of sound symbolism. The consonantal groups sn-, sl-, sm-, and more recently (last week!) bl– have revealed to us their puzzling role in etymology. Snobs, sleaze, smut, and bletherskites figured prominently in the discussion. For the sake of the history of smell some basic truths should perhaps be repeated. Sound imitation (onomatopoeia) is a rather obvious phenomenon: grunt, croak, splash, and perhaps even kick (let alone caw-caw, bow-wow, and barf–barf) tell their story rather clearly, but sound symbolism is different. Why should sl- arouse disgust or kl– make us think of stickiness? Yet they do, and, strangely, identical associations are not limited to English or even Germanic: they recur again and again in the languages of the world.

A hundred years ago, the Swiss linguist Wilhelm Oehl, a diligent student of what he called primitive word creation, devoted a gigantic article to the words for smelling and stinking. He derived all of them from sound imitation, but his English and other Germanic examples with initial sm– are few and do not go far enough.

Granted, the group sm- occurs in some onomatopoeic words. For instance, the verb smatter (which most of us know only from smattering of) once meant “to prate, chatter.” It is almost homonymous with German schmettern “to smash; bellow,” and one wonders whether schmettern is akin to its English look-alike, with the underlying sense being “to make violent or erratic movements.” Smash is reminiscent of smack “to strike” and smite and is almost certainly onomatopoeic, regardless of whether it is a blend of sm– and –ash, under the influence of bash, crash, dash, etc. Obviously, in all of them, it is –ash and –atter, not sm-, that imitate some sounds. Yet, as will soon become clear, reference to onomatopoeia should not be ruled out while dealing with smell.

Another approach to the group sm– is through sound symbolism. In dealing with symbols of any type, it is hard to prove anything, and careful etymologists prefer to steer clear of intangible entities. However, a look at even an abridged page of English sm-words shows that smell is not quite isolated, and (an important point!)  dictionaries dismiss quite a few of them as being of unknown origin. Such are smalm ~ smarm, a dialectal word for “smear,” smelt and smolt (fish names), (be)smirch (while smirk allegedly has respectable ancestry!), smitham ~ smeddun “fine powder,” smoot “to do casual work in a printing house,” smuggle, smother, and others. What role did sm– play in their creation?

Some clarity is also required in dealing with the formula “of unknown origin.” In most cases, it refers to words isolated in English, with no traces outside that language. Such is the mysterious smoot, mentioned above. Elsewhere, similar forms have been recorded in Dutch, Frisian, Low (that is, northern) German, or Scandinavian. Even Lithuanian and Greek cognates occasionally turn up in this material. All of them tend to mean approximately the same, but this fact provides no clue to their origin.

An additional complication, also mentioned more than once in this blog, is the existence of the so-called s-mobile (movable s). In dozens of obviously related words, the root may exist with or without initial s before another consonant. An anthologized pair is Latin taurus versus Gothic stiur “steer, castrated ox” (Gothic is a dead Germanic language, recorded in the fourth century). The tricks of this s are unpredictable: even in the same language parallel forms with and without initial s occur. As long as we remain within the sm-group, we notice Engl. small and Russian mal (the same meaning). It follows that smell, the object of our search, may have (and it probably does have) cognates beginning only with m. If this is indeed so, we should assume that the original sound group was sm– and that, where s– is absent, it has been lost.

With this background in view, we begin to understand why smell ended up among words of unknown origin and to what extent that origin is indeed unknown. Obviously, we won’t be surprised to discover that our verb is part of a rather broad group referring to the olfactory experience. From the phonetic point of view, smell is especially close to smolder, which appeared in English in the fourteenth century and meant “to smother, suffocate.” There is no way of knowing whether smolder is a borrowing from some northern West Germanic dialect or native. Nor does it matter in this context. Smell was first recorded two centuries earlier than smolder, but some evidence suggests that it did exist in Old English. Smolder resembles Dutch smeulen (the same meaning). Its cognates display a respectable Indo-European heritage. For instance, Russian has smola (stress on the second syllable) “resin,” and there are related forms in Lithuanian and Old Irish; hence the name of the town Smolensk.

A rather persuasive etymology connects the ideas of smelling and burning.  It was developed in 1899 by the American philologist Francis A. Wood, to whom, as to Oehl, I often refer in this blog. It does not seem that Oehl was aware of Wood’s detailed publication, even though it bore almost the same title as his own. Indeed, in Germanic and occasionally outside it, the initial group sm– occurs in quite a few words related to burning (smoldering), suffocation, and the like. Smoke looks like one of such words, and it has often been mentioned in this context, even though not in our etymological dictionaries. Everything, I believe, began with “smell”; the idea of burning must have come later. Burning resin, mentioned above in connection with Smolensk, certainly smolders, and its smell is easy to detect.

The consonants m and n are nasal, and it is not fortuitous that the word nose begins with an n. In the articulation of m, the lips are closed, and the air passes through the nose. This is probably how some words for “odor” and scent” originated. Such a conclusion returns us to onomatopoeia, but later, sm– must have acquired a symbolic value and began to occur in various words for stinking, suffocation, and the like.

However, we are still in the dark about the origin of –ell in smell. If smell and smoke belong together (and I believe they do), we observe a group of words referring to more or less the same experience. We observe the initial group sm– in them, but are unable to go farther. For example, smack “taste,” not related to smack “strike,” is also near. After all, if something smells bad, we don’t want to eat it. Producing such etymological strings is both attractive and dangerous, because, given enough ingenuity, one can connect anything with anything else. Yet despite all the uncertainty, smell is hardly an orphan of English etymology. It has at least one parent, namely, a sound-imitative and sound-symbolic initial group. Some of the word’s relatives are dubious, but having a somewhat dysfunctional family is perhaps better than having none (at least in language).