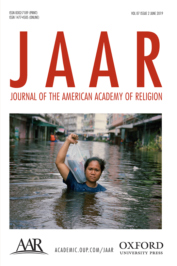 Journal of the American Academy of Religion

The Journal of the American Academy of Religion is generally considered to be the top academic journal in the field of religious studies. This international quarterly journal publishes top scholarly articles that cover the full range of world religious traditions together with provocative studies of the methodologies by which these traditions are explored.

Several weeks after the Sri Lanka’s Easter tragedy, in which suicide attackers with links to ISIS killed more than 250 people in a series of coordinated bombings, the country’s president announced that he was releasing a Buddhist monk from prison. The monk, Ven. Galagoda Atte Gnanasara, was the country’s most controversial cleric, having risen to prominence in the aftermath of Sri Lanka’s civil war as the head the Army of Buddhist Power (Bodu Bala Sēnā), an influential Buddhist nationalist group with strongly anti-Muslim views. At the time of his release he had served ten months of a six-year sentence for contempt of court. The announcement of the monk’s pardon instantly made headlines in Sri Lanka and around the world, with many analysts warning that the president’s actions would result in a new phase of pro-Buddhist and anti-Muslim policies on the island.

Yet, as I ask in a recent article, “Buddhist Law Against the State?”: Why was the monk incarcerated in the first place and what, exactly, was the reversal that was occurring? Moreover, what does the broader saga reveal about the interweaving of religion, law and politics in Sri Lanka?

The significance of Gnanasara’s recent exoneration is diminished only by the significance of his original arrest in June 2018, when, for a period of weeks, the island was fixated on the monk’s fate. Gnanasara’s arrest filled newspaper headlines and TV programmes, social media memes and viral videos. From the capital city, Colombo, to the some of the island’s most remote towns, Buddhist monks and lay leaders held rallies and demonstrations, accusing the government of attacking Buddhism and trammelling on the sacred institution of the Buddhist monasticism. At one point, hundreds of saffron-robed monks turned one of Colombo’s busiest intersections into a traffic-stopping protest gathering.

While the spectacle was captivating, even more remarkable were the arguments being made—and not made—about law. As the protests spread around the country, critics focussed less on the conviction itself and more on a rather small legal technicality relating to the procedures of imprisonment: the question of whether the monk would be forced to remove his sacred robes and don the standard prison uniform of a white “jumper” and shorts. From a chorus of voices opposing the court’s judgment, Sri Lankan Buddhist protestors directed their attentions to the robe. So fixated was the public on Gnanasara’s prison clothes that some journalists begin referring to the affair as “Jumper-gate.”

Jumper-gate is one of those rare prism-like events, in which, for a moment, a miscellany of seemingly diffuse and unrelated ideas becomes boldly visible as a single connected unit. In this case, what came strongly into view was the centrality of law in the island’s ongoing debates over the status of Buddhism in a religiously and ethnically diverse country.

Support for Gnanasara merged with demands for law reform. For example, protestors spoke out against what they perceived as injustices built into the island’s long-standing system of legal pluralism, in which separate bodies of property and personal law applied to Muslims, Jaffna Tamils, Kandyan Sinhalese and others—while no concrete legal accommodations seemed to apply to Buddhists, beyond vague constitutional guarantees to give Buddhism the “foremost place.”  Protestors also used the idea of a monk being forced to disrobe as evidence of a state-led legal campaign against monastic law, or Vinaya.

Even more striking in the protests was the deep interweaving of race and colonialism with these issues of religion and law. Echoing throughout jumper-gate were accusations that Sri Lankan law was “white-person’s law” (suddangē nitiya) the discriminatory product of Portuguese, Dutch. and British colonists who, as Gnanasara put it “made the law, while holding a bible and giving responsibility to God.” In slogans and speeches dense with multivalent language that mixed together imagery of skin-color, nationality, ethnicity, and language, protestors announced that Sri Lanka’s legal institutions were tainted by bigotry and that those state officials who staffed the courts were, in fact, cabal of deracinated “black-whites” (kalu suddo) who were perpetuating a regime of colonial oppression.

Gnanasara is now out of prison. Nevertheless, those issues and arguments that appeared crystalline during Jumper-gate continue to dominate the country’s religious and political life.  Events like Jumper-gate (or Buddhist legal activism) seem to be occurring more often, not less—not just in Sri Lanka but around Southeast Asia. Understanding religion in this region increasingly requires scholars to understand law and history and, perhaps then, begin to understand a healthy way to move forward.

Kelaniya Temple in Colombo, Sri Lanka. April 24, 2019. A Sri Lankan Buddhist monk participates in rites dedicated to the victims of a horrific series of bombings that took place on Easter Day 2019 and killed more than 250 people in the cities of Colombo, Negombo, and Batticaloa. (ISHARA S. KODIKARA/AFP/Getty Images.)

Benjamin Schonthal is Associate Professor of Buddhism and Asian Religions at the University of Otago in New Zealand, where he is also Associate Dean (International) for the Humanities Division. He received his Ph.D. in the field of History of Religions at the University of Chicago, where his dissertation received the 2013 Law & Society Association Dissertation Award. Ben's work examines the intersections of religion, law and politics in late-colonial and contemporary Southern Asia, with a particular focus on Buddhism and law in Sri Lanka. His research appears in The Journal of Asian Studies, Modern Asian Studies, the International Journal of Constitutional Law and other places. Ben's first book, Buddhism, Politics and the Limits of Law, appeared with Cambridge University Press in 2016. His current research project, supported by the Royal Society of New Zealand, looks at the interactions of state law and Buddhist monastic law in nineteenth- and twentieth-century Southern Asia.

Desires for power: sex scandals and their proliferation