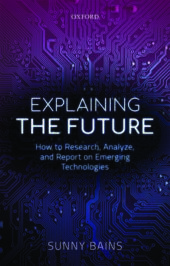 Explaining the Future: How to Research, Analyze, and Report on Emerging Technologies

I just watched WALL-E for the first time in five years or so. It’s the story of a plucky little robot tasked with cleaning up the world by compacting rubbish into blocks and building structures out of the blocks to minimize the amount of land they take up. Of course, he falls in love and saves the world along the way, but for a geek like me, that’s beside the point. It’s a great movie about robots and, laws of physics aside, shows quite a deep understanding of their potential. However, in their quest for a truly dystopian scenario, I think the storytellers missed the point about how such robots could really help us.

Imagine that, twenty years from now, we have got our production of plastic rubbish mostly under control. I saw Prof Mark Miodownik of University College London give a great talk on how he and his colleagues are working to make this happen for plastics. This would involve limiting our use of everyday plastics to those that easily be recycled, using enzymes to break them down into the hydrocarbons we need to make more stuff, and having a much clearer and more efficient recycling streams. To be really effective, this would have to happen not just for plastics but for everything: paper, organic matter, electronics. Though only a tiny fraction of the waste we produce is currently dealt with constructively, change is already happening: there are industrial machines designed to split out construction waste for re-use, disassemble iPhones, and sort in recycling plants.

Just stopping making the situation worse isn’t enough though. I think what haunts many of us is the idea that we have done too much damage to the planet for it to ever recover. So, after we stop (quite literally) trashing the planet, how do we deal with all those hundreds of thousands of acres of landfill across the world? Or, for that matter, the Texas-sized garbage patch floating in the ocean, made infamous by Sir David Attenborough two years ago?

To me, the obvious answer is autonomous robots. Not some magic-bullet-solves-the-whole-problem race of giant super-intelligent humanoid robots, but a swarm of mostly-small robots with dexterity and a specific expertise, but relatively limited native intelligence otherwise. I imagine hundreds of robot rats (probably looking more like cockroaches actually), scurrying up landfill with little sensors and dextrous arms, identifying particular types of material, and delivering the sorted rubbish to larger carrier robots that will take the sorted materials back to the recycling plant when they are full. Some robots will be bigger and stronger to pick up and lug old appliances back to base. Some will have specialist sensors to identify tricky materials. And all will have some ability to communicate with each other, even if only in the most rudimentary way.

This heterogeneity – the idea that there will be a diverse community of machines with different skills and of different generations – is one of several things that the makers of WALL-E gets very right. Another is the idea that robots don’t need to squander one of our precious resources: power. Apart from the obvious idea that small machines can use solar power to keep going, there are other possibilities too. Refueling robots (you’d want these stations to be able to move to where they’re most efficiently used) could also be powered by digesting some of the biological matter in the landfill. Two decades ago, researchers at the University of the West of England developed a system that could eat and get energy from slugs: surely a vegan digester must be possible by now. If that can’t work, then we could try to develop some kind of miniature version of the Klemetsrud waste-to-energy incinerator in Norway, which now includes carbon capture.

To make sure the electricity burden is minimized in the first place, we will want to use the most efficient hardware possible. For more than 30 years, we’ve been developing models of how to do vision, hearing, and other intelligent tasks using silicon circuits that work more like our brains do. This field, known as neuromorphic engineering, not only has the advantage of speed, but – when designed well – neuromorphic circuits can operate with several orders of magnitude less power than their conventional digital counterparts.

Of course, a vision like this has many challenges: not least ensuring that robot rats aren’t hurting biological wildlife (perhaps including real rats). In an effort like this we will undoubtedly encounter unexpected problems and unintended consequences. But scientists, engineers, and philosophers from across the world have been considering these issues for decades now and, apart from anything else, we are all now exquisitely aware that the biggest danger to human life is other humans.

Why don’t we have swarms of robots in our landfill yet, when most of the technological problems seem to be solvable? Perhaps it’s because we, as citizens, have never made it a priority. But it’s clear robotic technology can develop pretty fast when given the right resources. In this case, the research is funded by the military. Of course, they’re looking to replace pack animals, security guards, and people who have to decommission bombs, not sort garbage. The engineers work according to our priorities, so if we want to see progress, we need to put our money where rubbish is.

On the plus side, the kind of smaller, less-intelligent, less safety-critical robots that we need to sort trash should be massively cheaper than the machines that we need to accompany troops. And maybe a war on rubbish is one that we could eventually win.

Featured images from Unsplash and Pixabay.

Sunny Bains is a senior teaching fellow in the engineering department at University College London. She teaches research, analysis, and communication skills to science, engineering and technical journalism students and has written hundreds of articles for magazines such as The Economist, Science, New Scientist, Wired, Electronic Engineering Times, and Laser Focus World, covering topics related to optics and photonics, machine intelligence and AI, emerging computing technologies, imaging, and displays. Her latest book is Explaining the Future: How to Research, Analyze, and Report on Emerging Technologies.

How to see inside a pyramid: the power of the mysterious Muon