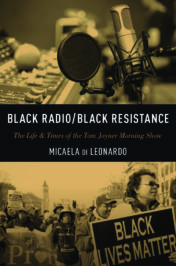 “Tom and Sybil, you guys lifted us up mightily for so many years,” said President Barack Obama to the Tom Joyner Morning Show anchors on 2 November, 2016. “I could not be more grateful.”

Economic insecurity or racism? Immediately following Donald Trump’s shocking 2016 electoral-college presidential win, commentators rushed to explain the results by focusing on white voters claiming that the economic recovery from the 2008 Great Recession had “left them behind.” Others argued strongly that Trump’s explicit racism and xenophobia had drawn in whites anxious about losing their racial and imperial privilege. But those arguments received little attention.

Until. Until Trump labelled the neo-Nazis marching on Charlottesville in August 2017 “good people.”  Until he put thousands of refugee children in cages. Until his racist, xenophobic lies, week after week, month after month, piled Pelion on Ossa, the structure finally tumbling down when he recently accused four congresswomen of color of being traitors “incapable of loving our country,” and called for the women, three of the four born in the United States, and all of them of course American citizens, to “go home!”

But an overlooked American media giant had never been fooled by the economic insecurity claim, and called out Trump’s racism, xenophobia, and misogyny day after day, both during the campaign and after the election. The Tom Joyner Morning Show, a syndicated morning drive-time music/politics/humor show whose eight-million strong audience is largely middle-aged, working to middle-class African Americans, has increasingly articulated explicitly progressive politics over its quarter-century history.

From its inception, the show and its audience—who called and later texted in their questions, opinions and magnificent wit—mixed into their deeply satisfying soul music playlist and comic hijinks the articulation of an organic vision of broad civil rights for all US minorities, women’s and LBGTQ rights, union rights and economic populism, antiwar and anti-imperial perspectives, and environmentalism. And from at least 2000 on, the program was deeply electorally engaged, working for and hosting Democratic politicians and movement activists. That engagement peaked in the 2007-08 electoral cycle, when they went all-in for Barack Obama, teaming up with the NAACP and the Teamsters Union, to register hundreds of thousands of black voters, urge them to the polls, and protect the franchise from Republican voter suppression with teams of on-call attorneys. They were rewarded with unprecedented access to the campaign, and multiple on-air interviews with Barack and Michelle Obama themselves.

Despite the show’s quarter-century of hugely effective political engagement, as well as its music, humor, and audience interactions, mainstream media has paid extraordinary little attention to this black media giant, its blistering political humor, and its activist and philanthropic work. This failure of attention is yet another example of media scholars Robert M. Entman and Andrew Rojecki’s “saints or sinners syndrome” (The Black Image in the White Mind: Media and Race in America): media’s near-exclusive focus on only celebrity/wealthy or impoverished/criminal African Americans, “invisibilizing” the broad adult working- and middle class that is the bulk of the black American population. And the bedrock of this program’s audience.

The show was no less engaged in the 2016 election, expressing withering contempt for Trump in straight news reporting and wild comedy. “Billionaire Bigot Bozo” and “Pumpkin-Colored Race-Baiter” are only two of their many dozens of scathing Trump epithets. But they were also highly aware, unlike most US media, that Hillary Clinton’s campaign’s failure to invest in ads in black media and get out the vote efforts in African American-majority precincts, combined with Republican voter suppression, could curb precisely the Democratic-voting margin that had ensured President Obama’s two electoral triumphs. And despite their explicit on-air warnings to Clinton, that is precisely what happened.

Show comic Chris Paul’s day-after heartbroken doggerel poem pointed to the racism—“He lit the fire of the angry white male”—misogyny—“What do we say to our daughters about electing a man who bragged about assault”–and xenophobia—“What do our Latino neighbors make of…a new America that doesn’t include them?”—that had animated Trump voters.

Since the election, Tom Joyner Morning Show has maintained its activist stance, and was deeply engaged in the 2018 midterm Democratic electoral wins, most particularly Doug Jones’ Alabama senatorial victory—fueled by black voters, who turned out in higher numbers than they had for Obama’s two wins, over the racist, hard-right evangelical, alleged pedophile Roy Moore. Huggy Lowdown, a show comic, exclaimed to anchor Sybil Wilkes: “Kinfolk came to vote like it was a black funeral!” [all lost in laughter]

As an audience member texted in: “It’s time for America to shut up and listen to the sistahs!”

It is indeed—long past time. Only transcending “saints or sinners” to acknowledge all minority Americans’ experiences and apprehensions will enable us to unite the majority of the country and take out Trumpism.

Micaela di Leonardo is Professor of Anthropology, African American Studies, Gender & Sexuality Studies, and Performance Studies at Northwestern University. She has published five books and several dozen articles, and has worked as an anti-racist and feminist writer and activist since the 1970s. And she is an avid soul music fan.