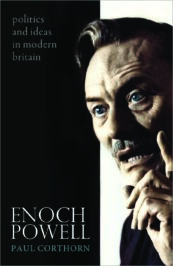 The Conservative politician Enoch Powell is best known for his outspoken opposition to immigration, but he also adopted distinctive positions on a range of other prominent issues in the post-1945 era. Indeed, he was the most prominent early exponent of neo-liberalism, the free-market perspective linking economic and political freedom in British politics. Yet there has been a tendency to interpret Powell as prefiguring the position taken by Margaret Thatcher in the 1980s. Instead, we should place Powell’s arguments in the context in which they were made: the politics of the 1960s.

In broad terms, the connections made between Powell and Thatcher are understandable. From the late 1950s, at a time when free-market economics occupied a marginal position in Conservative politics, Powell outlined a large part of what became the economic agenda of the Thatcher governments. This included a general opposition to state control and planning; a concern to prioritize control of the monetary source of inflation; the privatization of previously nationalized industries; and cuts to direct (income) tax. In 1988 Powell himself admitted that, in economic terms, what “used to be called Powellite…has recently been re-designated Thatcherite”.

The term neo-liberal itself began to be used in the mid-1930s and it gained political, economic and philosophical substance from the late 1940s when the Austrian philosopher Friedrich Hayek set up the international Mont Pelerin Society. In Britain, it was the establishment of the Institute of Economic Affairs (IEA) in the mid-1950s, with Hayek’s encouragement, that lead to neo-liberalism’s dissemination – with Powell playing an important role. In 1950, as he (successfully) fought an election campaign in Wolverhampton South West he spoke of his commitment to “competitive enterprise”. He was soon urging a move towards the “freer economy” and the prioritisation of “consumer choice”.

In 1988 Powell himself admitted that, in economic terms, what “used to be called Powellite…has recently been re-designated Thatcherite”.

From 1959, Powell started to work closely with the IEA, led by economists Ralph Harris and Arthur Seldon. This was an important departure for Powell as it was not exclusively Conservative. Indeed, Seldon was a supporter of the Liberal Party where forms of neo-liberalism had been articulated in the 1950s. Powell’s involvement with the IEA grew after Harris invited him to write a book entitled Saving in a Free Society (1960), in which he expressed that the “terms “free economy” and “free society” are to me interchangeable”.

Powell soon applied this perspective to one of the foremost political debates of the day: that over, as Powell put it in 1960, the “fear of falling behind in the economic race”. This was the tendency to compare British economic performance unfavourably with that of West Germany, France and Italy. When the Labour Opposition repeated the same broad argument, and with Britain’s decline often linked to its remaining imperial commitments, Powell argued that the country needed a “new kind of patriotism” that was “overwhelmingly economic” and embraced “enterprise and competition”.

Having read Hayek’s work, passed to him by the IEA, Powell now echoed it against the backdrop of the on-going Cold War. Taking aim not just at the Communist “East”, but also at the ambitions of British Labour’s economic policy, Powell stated: “It is no accident that wherever the state has taken economic decision away from the citizen, it has deprived him of his other liberties as well…state socialism is incompatible with individual liberty of thought, speech and action”. Seeking to underscore these points, Powell described the choice as that between the “market or the machine gun”.

In the mid-1960s, Powell intensified his free-market advocacy within the Conservative Party, now in Opposition. Publishing a collection of his speeches, Powell’s central message was that the Conservatives should present themselves unashamedly as a “capitalist party”. Arguably, they did this under Thatcher but, by then, Powell was estranged from the party – as well as from parts of neo-liberal opinion.

Powell decided not to contest his seat in the February 1974 General Election, having been an outspoken critic of the Conservative government’s policy of UK entry into the European Community. Instead, he dramatically asked his supporters to vote for the Labour Party, which was committed to a referendum on the European issue. Meanwhile, some of Powell’s neo-liberal associates had told him that his call for restrictions on immigration, made most notably in 1968, was at odds with his free-market perspective.

From the mid-1970s, Powell publicly broke with both Hayek and Friedman. Personal politics were, to an extent, the issue. In 1980, when Powell decided not to renew his membership of the Mont Pelerin Society, which he had held for the last 15 years, he said it was because it had become “a Hayek Adulation Society, with a minor niche for Friedman”. By this stage, in contrast, Thatcher was talking the language of the “free society”, publicly praising Hayek and entertaining Friedman at Downing Street.