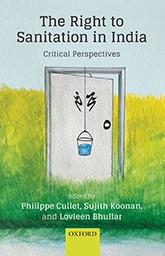 The Right to Sanitation in India: Critical Perspectives

The Right to Sanitation in India: Critical Perspectives, edited by Philipe Cullet, Sujith Koonan, and Lovleen Bhullar, represents the first effort to conceptually engage with the right to sanitation and its multiple dimensions in India. We sat down with editor Philipe Cullet to analyse the contributions of the law and policy framework to the realisation of the right to sanitation in India, the place the book holds in the socio-political landscape, and its international and comparative relevance.

Richa Bansal: Where would you situate this book in the socio-political landscape?

Philipe Cullet: Sanitation has evinced considerable interest from policy-makers, lawmakers, researchers, and even politicians in recent years. Its transformation from a social taboo into a topic of general conversation is evident from the central role of sanitation in recent Bollywood blockbusters, such as Piku (2015), Toilet Ek Prem Katha (2017), and Padman (2018). Toilet Ek Prem Katha is particularly interesting since it directly mirrors the policy framework of the central government that seeks to ensure open defecation free India by 2 October 2019.

“[I]nsofar as policymaking and implementation is concerned, sanitation has emerged from the shadows in the past five years.”

In fact, insofar as policymaking and implementation is concerned, sanitation has emerged from the shadows in the past five years. The Swachh Bharat Mission has led to the construction of millions of toilets throughout the country. Several states have been declared “Open Defecation Free” (ODF) in the last couple of years. This is a positive development in terms of emphasising the urgency of addressing the sanitation crisis.

The new focus on policy and implementation also fits well with various judicial pronouncements since the 1990s, where sanitation has been recognised as a fundamental right derived from the constitutional right to life. Yet ongoing policy initiatives are not linked to a rights perspective, and a statutory framework to transform the promise of the judicially recognised right to sanitation into reality is absent. For the right to sanitation to be realised, its multiple dimensions must be addressed holistically beyond the instrumental mechanism of constructing toilets.

RB: What would you say is the unique contribution of The Right to Sanitation in India?

PC: Richa, the book provides the first comprehensive analysis of the diverse dimensions of the right to sanitation. It exposes the limits of the current framework—a framework that lacks mechanisms to ensure the realisation of the right to sanitation in urban and rural areas on a universal basis, while ensuring the realisation of other rights, such as the rights to equality, environment, health, and water.

RB: So, Dr Cullet, how would you summarise the contents of this book?

PC: As mentioned earlier, this book addresses the various dimensions of the right to sanitation. The realisation of this right is crucial in itself as well as for ensuring the realisation of various other rights, including the rights to the environment, health, and water. It examines and analyses the different law and policy initiatives that have been undertaken to address issues that affect the realisation of the right to sanitation. These initiatives include the construction of toilets to address unsanitary conditions, the development of sewerage infrastructure and other measures undertaken to control water pollution and to reuse wastewater, and legislative reforms related to the work conditions of sanitation workers. Further, this book highlights issues that are not new but are yet to be satisfactorily addressed, such as manual scavenging and gender equality.

PC: No, the absence of statutory recognition of the right to sanitation does not mean that there is a complete void. Even where there has been a clear legal framework calling for the eradication of manual scavenging in existence for decades, it has not been enough to ensure its complete elimination perhaps because of the deep link between the practice of manual scavenging and caste. In addition, the all too frequent news of sanitation workers dying in the sewers dispels the impression that we are any closer to the elimination of all practices amounting to manual scavenging.

Further, the gender dimension of sanitation has often been instrumental in government interventions. For instance, protection of the dignity of women was presented as the primary rationale for the construction of toilets in official campaigns for behaviour change until 2017 when sufficient pressure led to a specific acknowledgement that this was problematic in policy documents, hopefully leading to a change on the ground.

RB: Do you think that your book has an international and comparative relevance?

PC: Yes. We believe it will contribute to the ongoing discourse on the right to sanitation at the international level. The conditions, concerns, and challenges in India may be similar to situations in other developing and least developed countries. Therefore, the book contributes to reimagining the right to sanitation from the perspective of the Global South through its mix of conceptual work and grounded research, with a number of the book’s chapters based on extensive ground-level work in the states of Kerala, Maharashtra, Rajasthan, Tamil Nadu, and Uttar Pradesh.

On the whole, the sanitation situation was for long seen as abysmal in terms of the number of people openly defecating. There has been much progress with toilet construction—though a lot more remains to be done—access to toilets is only one of the significant sanitation challenges facing the country.

Given the steady growth, India is expected to register in the coming decades, it becomes crucial to deliberate over the right to sanitation with its overlapping concerns for health, ecology, gender equality, and the practice of manual scavenging. Therefore, efforts like Swachh Bharat Mission need to be matched with active community participation; the book acts as a timely intervention to further the relevant debates and conversations in the public domain.

Philippe Cullet is Professor of International and Environmental Law at SOAS University of London and a Senior Visiting Fellow at the Centre for Policy Research, New Delhi.

Lovleen Bhullarholds a PhD in law from SOAS University of London, and is associated with Environmental Law Research Society, New Delhi.