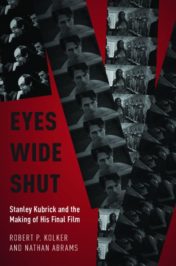 Eyes Wide Shut: Stanley Kubrick and the Making of His Final Film

Eyes Wide Shut took a full two years to shoot. But, more importantly, it was on Kubrick’s mind for 50 years. He began thinking of adapting Arthur Schnitzler’s fin-de-siècle Viennese novella, Traumnovelle, at the same time as he began making feature films in the early 1950s. There were many stops and starts along the way as Kubrick struggled to find the right way to do it. Finally, in the mid-1990s, he put his doubts to rest and plunged into the demanding task of making the movie that would become his last.

He gave the task of writing the initial screenplay to Frederic Raphael, a seasoned screenwriter, and the two clashed almost immediately. Feelings were so raw on Raphael’s part that he wrote an unflattering memoir of working with Kubrick, Eyes Wide Open. What Raphael failed to realize—or perhaps he realized it too well—was that he was something of a hired hand, someone to spark Kubrick’s imagination. As we see throughout the numerous drafts of the screenplay, Kubrick kept pushing and guiding Raphael’s hand. “NO!!” he writes in the margin. “Keep to A[rthur] S[chnitzler].” Or more intriguingly, as the orgy sequence was being written: “He should first be very sexy, then turn Pulp Fiction dangerous and brutal.” Raphael did as much as he could. Kubrick took over and finished the screenplay himself.

At the same time, Kubrick engaged in a typically detailed, all but obsessive, period of pre-production. Kubrick looked at everything—all the masks he could import from Venice for the orgy sequence; detailed measurements of Tom Cruise’s face for his mask. He sent out photographers to scour London, and other parts of the UK, for images that might be of use should he want to shoot on location. (As it turned out, much of the film, including the streets of Greenwich Village, was shot on studio sets.) He ordered catalogues of women’s underwear. He read widely not only books about Schnitzler, but Karen Horney’s work on psychology and a book called Cult and Occult, detailing bizarre sexual practices.

What followed was a shoot that was a remarkable period of concentration, patience, and working against Kubrick’s own biological clock. Despite deteriorating health, Kubrick insisted that every element in the film be exactly what he wanted, no matter how long it took. If a location was not to his liking, he moved on to another. If a set was not just so, he had it rebuilt. His actors—Cruise and Kidman—stuck with him throughout the arduous shoot. Others left, like Harvey Keitel, who was originally cast to play the role of Victor Ziegler and was replaced by Sidney Pollack. Begun in November 1996, the shoot was completed in June 1998. Months of editing followed.

Finally, in early March 1999, Kubrick sent a print of Eyes Wide Shut by air to New York (Kubrick never flew; in fact, he never traveled very far from home) where it was screened for Cruise, Kidman, and Warner Bros. executives. The projectionist was asked not to watch. Everyone was pleased with the film.

Despite the ongoing conspiracy theories that have surrounded the film’s orgy sequence, the film is not about the Illuminati or child sex trafficking, but rather the instability of seeing and desiring, of being certain in one’s gender, sexuality, and marriage. It is about class and power and the masks used to keep our identities from ourselves and others. The negative reviews that greeted the film’s opening have been replaced by serious scholarly inquiry into its enigmas. The Stanley Kubrick Archive at the University of the Arts in London have offered unparalleled access to the director’s working methods, offering detailed information on the particulars of his creative process on this and all his films. Eyes Wide Shut itself keeps opening new insights on each viewing, new interpretations—like a dream.

Robert P. Kolker is professor emeritus at the University of Maryland.

They are the co-authors of Eyes Wide Shut: Stanley Kubrick and the Making of His Final Film.