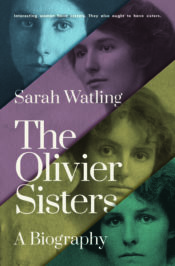 The Olivier Sisters A Biography

On 20 October 1921, a sombre procession took over King’s Parade, a usually bustling thoroughfare in Cambridge. A hearse made halting progress, bearing the weighty effigy of the Last Male Undergraduate, and accompanied in shuffling steps by ‘Mere Males’: bowed and wretched figures wearing long grey beards. Their sprightlier colleagues made speeches about the risks of female governance at the side of the road, hassled young women on bicycles and eventually raised the cry: “We Don’t Want Women!”

All this was because of a vote that was taking place that day in Cambridge University’s Senate House, to decide whether the women’s colleges, Newnham and Girton, would be allowed membership of the university. It was a vote between two compromise options: one offering degrees but not membership of the senate, the other only a ‘titular degree’ (ie. the certificate but none of the rights that went with a degree). Though suffrage had been extended to some women in Britain in 1918, and the women’s colleges in Cambridge were over fifty years old, women were not entitled to participate. Members had to vote in person, so by the time an official appeared on the steps of the building to announce the women’s defeat (i.e. the passing of the second option), it was just after 8.30 p.m. Cheers erupted. One Reverend Howard Percy Hart, perhaps overexcited by his day trip into Cambridge to cast his vote, exhorted the mob to “go and tell Girton and Newnham!” Off they went.

The principal of Newnham College (Girton was a long way out of town), Blanche Athena Clough, was a veteran of the women’s movement and was expecting trouble. The entrances to her college were closed and barred against the 1,400 or so men now charging towards them; supposedly, police and proctors (the university’s own disciplinary force) were on standby.

Between Blanche and the men stood the Clough Memorial Gates, a bronze tribute to her aunt, Newnham’s first principal. Halted there, the students turned their attention to another set of gates leading to the yard outside Old Hall (where some of the Newnhamites’ bedrooms were). Smashing down the brick gatepost, they gained entrance to the yard and commandeered an old handcart, with which they returned to batter in the lower panels of the Memorial Gates, causing hundreds of pounds worth of damage.

On the other side of the college, a subsection of the rioters managed to force open the iron gates of Clough Hall, break windows and smash in a door leading to Peile Hall. Only by placing themselves in the doorway were Proctors able to prevent the young men from gaining entrance. They satisfied themselves by searching for undefended parts of the college, shouting and singing, for another hour. For ninety minutes that evening, the women of Newnham were under siege.

At first the undergraduate community seemed appalled by the incident. Keen to display gallantry, each college held a meeting over the following weekend in which they passed resolutions condemning the assault. The colleges formed a committee to convey to Blanche Athena Clough, in person, the feeling that the outburst of “a small number of undergraduates” was strongly resented. Students elicited (and quickly received) donations to cover the cost of repairs. This, the young men seemed to feel, should be enough to close the matter. The controversy that erupted in the national press therefore stung them badly.

The shocking attack, by opponents to a motion that had anyway been defeated, caught press attention almost immediately. The Daily Chronicle reported “a very malicious attempt to accentuate the defeat of the women by destroying their property” as early as the 22nd. Within days The Times was intoning of “grave injury”; The Spectator of “bad manners and stupidity.” The Cambridge undergraduates’ own professors berated them for their un-sportsmanlike conduct. “What sense,” cried one, “what chivalry, was there in kicking the party that was down?” How could they possibly be trusted to run the empire one day, another worried, if they couldn’t even be trusted to behave as gentlemen?

The undergraduate press (which did not include women, of course) responded swiftly, transforming the debate from a question of the wrong done to women to one of the wrong done to Cambridge men. “[W]e feel it incumbent upon ourselves to drop our bantering for a while,” a Granta editorial announced gravely, a week after the attack on Newnham, “and utter a protest against the hysterically grotesque attack made upon Cambridge Undergraduates.” (They were talking about themselves.)

Sensational reporting had failed to understand that the whole thing was a prank, university magazines insisted; that the police were at fault for not stopping them; that, in fact, there was “a considerable number of foreign Undergraduates” involved.

To many, the outcry was simply further evidence that, despite appearances, it was in fact Cambridge masculinity that was under threat (rather than, say, the education of women or the principle of equality between the sexes). Whilst Dorothy Marshall, a young student at Girton, had spent 20 October in town “feeling small & forlorn & somehow in a hostile country” and Newnhamite M.E. Roberts remembered her college “temporarily resembl[ing] a beleaguered fortress,” it was clear to their male contemporaries that it was the women’s presence that was the threatening one. Young Cambridge men may have attempted to invade a women’s college but it was simply intended as a pre-emptive strike. Only the previous year, their elders had warned that though “for the moment [women] may be content with having stormed the walls of the university … in time… they will be heard knocking loudly at the gates of the colleges.”

The injustice of the whole thing was so severe that the concurrent coverage for the women rankled. The student press noted the “propaganda” gains for Newnham, and began to question the veracity of Blanche Athena Clough’s estimate of the damage. Worse was to come, when a handful of students who had been involved in the raid were indentified and disciplined. In the words of an outraged student, “thanks to the childish feminine spite born of disappointment, several relatively innocent undergraduates have been sent down.”

One nice thing about the day of the Senate House vote, The Old Cambridge reflected afterwards, was that “men, and men only, thronged the pavements of King’s Parade…men’s voices filled the air…Men dominated the scene: woman might never have been born into the world.” This halcyon moment would never be regained in Cambridge, though it took until 1948 for women to obtain full membership. The hysterical reaction to their campaign in 1921 ensured that the Newnham and Girton staff trod carefully for the next two decades, keen not to jeopardize their hard-won, if unequal, place at the university. After the events of October 1921, it was a position they understood to be far less secure than they had hoped.

Sarah Watling holds degrees from the University of Cambridge and the University of London. She is an independent historian and the recipient of the 2016 Biographers' Club Tony Lothian Prize. She lives in London.