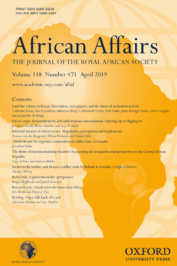 Does President Donald Trump have a policy on Africa, and if so what? The answer to this question is both interesting and revealing.

President Trump does not seem to pay much attention to Africa. Apart from his well-publicised comments to a group of senators in January 2018 dismissing the whole of Africa as “shithole countries,” he has not said much about the continent. He has not visited it and has shown no inclination to do so, though both his wife and his daughter have done so. In two years, he has met very few African leaders. When he does, his focus is clear: at a breakfast meeting with some, organised by Nikki Haley in the margins of the UN General Assembly in September 2017, he reportedly told them, “I have so many friends going to your countries trying to get rich.  I congratulate you – they’re spending a lot of money.”

And yet, Africa is the one region of the world on which the Trump administration has published a coherent strategy. On 13 December 2018, in a speech to the Heritage Foundation, National Security Adviser John Bolton set out the Administration’s approach. Bolton identified three core US interests in Africa: advancing US trade and commercial ties with African countries, for the benefit of both; countering radical Islamic terrorism and violent conflict; and making efficient and effective use of development assistance to promote the interests of the American people.

But the major theme of the strategy is not Africa at all: it is the superpower rivalry for influence with China and Russia, and (a favourite Bolton theme) hostility to the United Nations. Bolton accuses America’s rivals of pursuing “predatory” policies: China of using debt to “hold states in Africa captive to Beijing’s wishes and demands,” and Russia of “selling arms and energy in exchange for votes at the UN.” By contrast, countries receiving US assistance must invest in health and education, encourage accountable and transparent governance, support fiscal transparency and promote the rule of law, though he underlines (without apparent irony) that “countries that repeatedly vote against the United States in international forums, or take actions counter to US interests, should not receive generous American foreign aid.”

The strategy reflects President Trump’s “America First” foreign policy. The clearest expression of this policy is in Trump’s personal statement on Standing with Saudi Arabia, after the killing of Saudi journalist Jamal Khashoggi. The world is a dangerous place, the president says, so we need to stick by those who fight our enemies, buy our arms, and invest in our country, even if they may have killed a few innocent people along the way. Values have vanished, and in the case of Africa, Africans’ own view of their interests is not an element in the strategy at all.

Even so, underneath this policy umbrella, there has been more continuity of US policy than meets the eye.

For the best part of two years, with no new assistant secretary appointed in the State Department and no steer from the White House, US policy on Africa continued much as before. Congress, which rejected Trump’s proposal for drastic cuts in US aid, ensured that the major US programmes put in place by previous Presidents, such as the President’s Emergency Plan for AIDS Relief, the Millennium Challenge Account agreements for economic reform, and the African Growth and Opportunity Act to encourage trade, continued uninterrupted. And United States Africa Command (AFRICOM), set up in 2007, continues to cooperate closely with African governments in the fight against Islamic terrorism, especially in the Sahel.

In addition, rather hidden by the rhetoric of the Bolton statement, a new Prosper Africa initiative has doubled the amount available under the US International Development Finance Agency to $60 billion – almost exactly the same size as President Xi Jinping’s last commitment to Africa under the Chinese Belt and Road Initiative.

America, of course, remains a superpower, and a country with which most African countries want to maintain a healthy working relationship. They have no problem taking money, trade and support.

Dr Nick Westcott has been director of the Royal African Society and an associate of SOAS’s Centre for International Studies and Diplomacy since November 2017. Prior to this, he was managing director for Africa (2011-15), and for the Middle East and North Africa (2015-17) in the EU's External Action Service in Brussels.  He first joined the Foreign and Commonwealth Office in 1982 and served in Brussels, Washington, Tanzania and latterly as British high commissioner to Ghana and ambassador to Cote d'Ivoire, Burkina Faso,Togo and Niger (2008-2011). In London, he also served as the FCO’s European correspondent, the head of Economic Relations Dept, and as the FCO's chief information officer. He has a PhD in African history from Cambridge University.