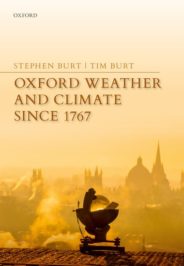 Oxford Weather and Climate since 1767

Hornsby was a Savilian professor of astronomy at Oxford University. At the time, the university’s astronomy facilities were very limited (a couple of telescopes on the roof above the professor’s lodgings in New College Lane). Hornsby, described by contemporaries as “an energetic young Fellow of Corpus Christi College,” petitioned the Radcliffe Trust in 1768 for funds to build and equip a new astronomical observatory. He must have been persuasive, too, for the Radcliffe trustees agreed quickly, and funded the construction of Oxford’s Radcliffe Observatory. The final bill came to £31,661 (between £3M and £4M in 2019 values). The instruments themselves, the finest in the world in their day, cost almost as much as the building. By comparison, Hornsby’s salary, as the Radcliffe librarian, was £150 per annum. The observatory was completed in 1799.

For once, the Law of Unintended Consequences worked in science’s favour. Air temperatures were at first measured solely to correct star positions for atmospheric refraction, but over time the meteorological observations became increasingly important in their own right. Today they are unique and priceless records documenting changes in climate since Georgian times, and a significant contribution to Britain’s meteorological history.

After a few false starts following Hornsby’s death in 1810, the observatory has maintained an unbroken daily record of atmospheric temperature and barometric pressure since 14 November 1813. Daily rainfall records began in January 1827 (a monthly rainfall series began with Hornsby in 1767), and daily sunshine duration in February 1880 – the longest continuous sunshine record anywhere in the world. After the astronomical observatory moved to the clearer skies of South Africa in 1935, responsibility for the meteorological observations passed to the university’s School of Geography (now the School of Geography and the Environment). Today the observers are postgraduate students, who make the morning meteorological observation at 9 a.m. Greenwich Mean Time every day of the year without fail – including Christmas Day.

Almost all of the meteorological instruments have been replaced over the years, thermometers many times: but the duty observer still reads the the Newman Standard barometer, installed in the Radcliffe Observatory in June 1838. The same instrument has been in use for over 180 years.

The records could well have been lost altogether had it not been for the dedication of staff members like James Balk, who joined the observatory at the age of 14 in 1903. He took on the Herculean task of assembling, cataloguing and carefully analysing those precious early records, mostly in his spare time. Without his interest and commitment, they might have been discarded when the observatory staff moved to Pretoria. Balk remained in charge of the meteorological observations in Oxford after everyone else moved, only retiring in 1954 after 51 years of service.

What do Oxford’s long weather records tell us of climate change? Oxford has warmed by 1.7 degrees Celsius in 200 years, and all of the ‘Top 5’ warmest years have occurred since and including 2006. In contrast, the most recent ‘Top 5’ coldest year was 140 years ago in 1879. Oxford is also getting sunnier, as well as warmer. Sunshine amounts have increased since the 1960s, particularly in winter, the increase being largely attributed to the reduction in winter fogs brought about by smoke reduction legislation. Fogs are now only one-third as frequent as they were in the 1920s and 1930s.

What will the next 250 years of weather records from Oxford reveal? Before the end of this century Oxford could be warmer than Rome is today. Whatever would Thomas Hornsby make of that?

Stephen Burt has published widely on many and varied aspects of British climatology, and is a fellow of the Royal Meteorological Society, chairman of the Climatological Observers Link and a member of the American Meteorological Society and the Scientific Instruments Society. He retired from the department of meteorology at the University of Reading in 2018. Along with Tim Burt, Stephen is co-author of Oxford Weather and Climate since 1767.

Fifty years on: what has plate tectonics ever done for us?