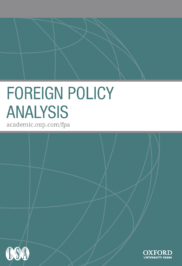 Reflecting the diverse, comparative and multidisciplinary nature of the field, Foreign Policy Analysis provides an open forum for research publication that enhances the communication of concepts and ideas across theoretical, methodological, geographical and disciplinary boundaries.

In a January 2019 press briefing at the White House, US National Security Adviser John Bolton flashed a legal pad with “5,000 troops to Colombia” written on it, a not-so hidden message to contested Venezuelan President Nicolás Maduro that the United States was considering sending troops to the region. Maduro is presiding over a Venezuela in economic freefall and political turmoil. Bolton conjured images of the United States unilaterally sending troops to police the hemisphere as it had in the previous century. While any effort to depose Maduro militarily may ultimately be fraught, part of the concern triggered by Bolton’s warning was the absence of international support for any prospective intervention.

In recent years, a number of studies have found that the American public is more supportive of military interventions when the intervention is endorsed by a multilateral organization like the United Nations. What is less clear is whether US foreign policy elites – including government officials, think tank, and academic experts, and interest group leaders – also are influenced by multilateral endorsement.

Multilateral endorsements can signal to audiences that a military mission is likely to be more successful, it is likely to be perceived as more legitimate, and/or that other actors are likely going to share the burden in terms of troops and the financial costs of an intervention.

It is not immediately obvious that professionals with a particular influence on US foreign affairs respond to endorsements by multilateral organizations. Experts follow foreign policy closely and thus are in less need of a second opinion from international audiences about the morality or efficacy of interventions. But perhaps such signals are important to elites since they might have greater awareness of the benefits of multilateral support.

But it appears that multilateral endorsement has a large positive effect on support among foreign policy leaders for the use of force across a range of conﬂict scenarios. Foreign policy elites were more likely to support intervention in both generic scenarios, like genocide, as well as more specific scenarios, such as a North Korean invasion of South Korea or violent extremism in Iraq and Syria, when United Nations support was involved. On average, support for the use of force among elites was 15 percentage points higher in the multilateral condition than in the unilateral condition. It also appears that multilateral endorsement matters for both Democratic and Republican elites, with the effects larger and more significant for Democrats than Republicans.

Comparatively, multilateral support had a weaker effect on the public than it did on the elites, with support for sending troops just six percentage points higher in the multilateral condition across all scenarios for the public.

This suggests that the specialized expertise of foreign policy leaders may make them more, rather than less, responsive to the endorsement effects of multilateral organizations, especially compared to the public. Regarding future military interventions in which the United States might be involved —whether in Venezuela, in the Baltics, or in Asia—multilateral endorsement may provide an important signal to leaders about the wisdom or legitimacy of such efforts. Since they already have knowledge of foreign policy, they may value multilateral endorsements either because such interventions spread the costs more widely and/or are perceived as more legitimate.

Joshua Busby is an associate professor at the LBJ School of Public Affairs at the University of Texas in Austin. Find him on Twitter @busbyj2.

Craig Kafura is a research associate for public opinion and foreign policy at the Chicago Council on Global Affairs, a Security Fellow with the Truman National Security Project, and a Pacific Forum Young Leader. Follow him @ckafura.

Jonathan Monten is a lecturer in political science and director of the International Public Policy Program at University College London.

Jordan Tama is associate professor in the School of International Service at American University and co-director of Bridging the Gap. Follow him @ProfJordanTama.