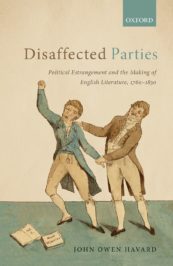 Should we listen to the voice of “the people” or the conviction of their representatives? Britain’s vote to leave the European Union has inspired virulent debate about the answer. Amidst Theresa May’s repeated failure to pass her Brexit deal in the House of Commons this spring, the Prime Minister appealed directly to the frustrations and feelings of the people. “You the public have had enough,” she asserted in a speech of March 20. “You are tired of the political games and the arcane procedural rows,” she continued, adding: “I agree. I am on your side.” Others called for parliament to seize control of the process: to bypass May’s government altogether by passing its own resolutions. In this scenario, MPs would listen not to the public mood but to their own judgment, blocking their ears to the demands of a restive, divided populace.

These divides, pitching politicians against the people, have a deep history. “When a gentleman was fairly and duly returned as the representative of any body of men,” William Baker MP asserted in 1780, “he was then, in the sentiments he might entertain concerning any parliamentary question, or state difficulty, to be governed by no other influence but the dictates of his conviction, and ought not to be directed by any other motive whatever, not even by the injunction of his constituents.” Baker’s adherence to these principles did not in fact go over well with his constituents, a newspaper sketch wryly noted, proving “neither very intelligible nor acceptable to the majority of the electors.”

In his 1774 “Speech to the Electors of Bristol,” Edmund Burke made a celebrated appeal to the superior judgment of MPs. Burke conceded that “it ought to be the happiness and glory of a representative to live in the strictest union, the closest correspondence, and the most unreserved communication with his constituents.” But he was unequivocal about the politician’s role: “Your representative owes you, not his industry only, but his judgment; and he betrays, instead of serving you, if he sacrifices it to your opinion.” In other words, MPs respected their constituents by exercising independence from them.

…amidst the current “global populist insurgency, our duly elected representatives should depend more upon their own judgment and worry less about the uninformed opinion of the masses.

Burke’s speech itself has become bound up in contemporary debates surrounding legislative agency. Quoting these lines from Burke’s speech, James Kirchick concludes that, amidst the current “global populist insurgency, our duly elected representatives should depend more upon their own judgment and worry less about the uninformed opinion of the masses.” On the other hand, writing about Brexit for the right-wing website Breitbart, Jack Montgomery writes that Burke’s Bristol speech “is often used by modern MPs as an excuse to ignore the wishes of their electors.” Montgomery’s article turns instead to Burke’s Thoughts on the Cause of the Present Discontents. The House of Commons, Burke stated in that 1770 pamphlet, “was not instituted to be a control upon the people” but as “a control for the people.” Montgomery quotes Burke’s demands that MPs should have “some consanguinity, some sympathy of nature with their constituents,” rather than that they should “in all cases be wholly untouched by the opinions and feelings of the people out of doors. By this “want of sympathy” Burke concluded “they would cease to be a House of Commons.”

Appeals like those of Baker and Burke belonged to their own period of revolutionary ferment. The seeming incoherence of that moment—“What people, for god’s sake?” a review of Burke’s pamphlet noted in exasperation—might have lessons for our own. Before the electoral reforms of the early nineteenth century, the “parties” of politics were in flux. A pamphlet on the 1720 financial crisis described Members of Parliament joining the “disaffected Party” in response to the stock market crash following the South Sea Bubble. Yet this term applied here not to parties in the more restricted parliamentary sense, but to an expanded assemblage of discontented elements within the nation at large. MPs had aligned themselves with fault lines emerging from below, not partisan lines dictated from on high. The rage of the people determined the shape taken by the parties here, not the other way around.

Recent years have witnessed a global epidemic of disaffection from the political process. Alienation from electoral politics has coupled with an often incendiary populism (not least in the events that brought former Breitbart associate Steve Bannon into the White House). Debates that pitch politicians against the people seem poised to continue. But these are artificial—even undemocratic—distinctions. Burke’s writings and their apparent inconsistencies point instead to the ways that popular discontents were never neatly contained, nor easily separated out from parliamentary will. The exasperated response to Burke (“What people, for God’s sake?”) also points to the slipperiness of this term and its availability to manipulation. We must remain wary about efforts to conscript the people’s rage for monolithic, authoritarian, ethno-nationalist ends. But adopting a deeper historical perspective reminds us that democracy is always messy, shifting and uncertain, open to excluded voices and unsettled feelings. The people, for better and worse, continue to define the parties of politics.

Featured image credit: “Put it to the People” by John Briody. CC BY 2.0 via Flickr.

John Owen Havard is an assistant professor at Binghamton University and received his PhD from the University of Chicago. His articles and essays have appeared in ELH, The Eighteenth Century: Theory and Interpretation, Contemporary Literature and in the volumes Sterne, Tristram, Yorick: Tercentenary Essays on Laurence Sterne and Byron: The Poetry of Politics and the Politics of Poetry. His reviews and review essays have appeared in The Scriblerian, Eighteenth-Century Studies, The New Rambler, and the English Historical Review. He has received fellowships from the British Association for American Studies, the Whiting Foundation, the Mellon Foundation, and the NEH.

Brexit: when psychology and politics clash