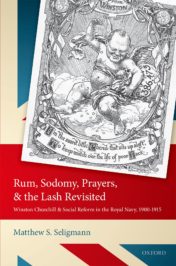 How do you write about an historical topic when the principal sources that would reveal what happened and why no longer exist? Good case studies exist in the Royal Navy’s efforts in the run-up to the First World War to reform the spirit ration (the alcohol allocated to members the Royal Navy) and to suppress homosexuality. In both these instances, policies were in place and actions taken, but there is a near void in the government records.

This may be deliberate. The Admiralty Record Office Digests, the huge leather-bound volumes in which all of the files sent for safe-keeping to the Navy’s central document repository are carefully listed, contains detailed and specific references to numerous important papers with a bearing on what was then euphemistically termed “unnatural crime” So there can be no doubt that substantial paperwork on this topic once existed. Moreover, some of the annotations in the digests strongly imply the Navy intended to retain the most important of these files for posterity. Yet, none of them are available today, having been ‘weeded out’ by the end of the 1950s. Accidents do happen and people make mistakes, but it is hard to avoid the impression that these documents are no longer present because someone did not want them to survive.

If the trail on the suppression of homosexuality leads to a dead end, the situation is even worse with regard to the spirit ration. After 1908, the pages of the digests covering this area (“Indulgences” in Admiralty parlance) are literally blank, suggesting that no papers on this topic were ever registered in the Record Office. In theory this implies that in the immediate run-up to the First World War, rum was so insignificant a part of naval life that the Admiralty secretariat never needed to create a single file on the subject. Thus, not so much a trail with a dead end as no trail at all.

[…] official papers must once have existed, but, for whatever reason, they had left none of the usual traces in Whitehall. Fortunately, if the Admiralty did not choose to keep records on this topic or even to register that they had once existed, several important figures were more conscious of the needs of posterity and personally retained relevant correspondence.

In the case of the spirit ration, this is evidently not true. In March 1912, the new First Lord of the Admiralty, Winston Churchill,announced to Parliament that he would examine the policy of giving sailors a daily tot of rum. One year on he had outlined the results to an expectant House of Commons. During those twelve months it is inconceivable, given how bureaucracy works, that such an examination would have produced no documentation. On the contrary, official papers must once have existed, but, for whatever reason, they had left none of the usual traces in Whitehall. Fortunately, if the Admiralty did not choose to keep records on this topic or even to register that they had once existed, several important figures were more conscious of the needs of posterity and personally retained relevant correspondence. Churchill was one; Prince Louis of Battenberg, the Second (soon to be First) Sea Lord was another. His private papers are especially useful. Not only do they refer explicitly to the supposedly non-existent official documents – confirming, as no other source does, that they had once existed – but, in addition, they succinctly explain what the policy was and how it had come about. As all historians know, private papers often add colour to the official record. In this instance they cover for the complete absence of an official record.

The situation with regard to the suppression of homosexuality is different in almost all respects. Unsurprisingly, private papers do not do much to illuminate this topic. Fortunately, unlike with the spirit ration, there is ample evidence in the digests that official records had been created, registered and retained until the 1950s. Moreover, the digest entries are remarkably detailed, providing the names of suspected culprits, the locations of the alleged contact, and the actions that were taken by the authorities. Where new regulations or procedures resulted, the number and date of the subsequent confidential circular were recorded. Such information provides avenues into other documentary sources. It’s possible to cross reference names to individual service records, court martial registers, medical officers’ journals, and Record Office indexes. All of these provide little snippets of information, insignificant on their own, but collectively providing a great deal of important information. More vital still, it is possible for historians to use the date and number of confidential circulars to track down specific rule changes and the documents that explained them. They are not always easy to find, as some of the confidential circulars are still held within the Ministry of Defence. But once obtained and viewed in conjunction with the information from the other sources mentioned above, they tell the story that the “weeded” files no longer can.

It can be deeply frustrating to know that that all the answers on a particular topic were once on a scrap of paper that is now gone forever. However, neither the blank page nor the dreaded word ‘weeded’ need be an insuperable barrier to historical research. Alternative sources nearly always exist; it is just a matter of finding them.

Matthew S. Seligmann is professor of Naval History and head of the Division of Politics and History at Brunel University London. He is a winner of the Sir Julian Corbett Prize for Naval History and the author of The Royal Navy and the German Threat 1901-1914 (2012), Spies in Uniform: British Military and Naval Intelligence on the Eve of the First World War (2006) and co-author of The Naval Route to the Abyss. The Anglo-German Naval Race, 1895-1914 (2015). His most recent book is Rum, Sodomy, Prayers and the Lash Revisited: Winston Churchill and Social Reform in the Royal Navy, 1900-1915 (2018).

Ypres: the city of ghosts