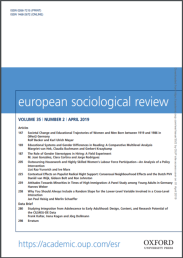 The European Sociological Review publishes original research articles in all fields of Sociology. ESR is the flagship journal of the European Consortium for Sociological Research and shares in the Consortium’s mission to foster sociological research that combines analytical theory and stringent empirical analysis to contribute to a cumulative and generalising body of knowledge on the social world.

All around the world, girls outperform boys on reading tests. Why is this? In and outside of academia, people have been concerned about girls’ under-performance in math, or more generally: STEM (Science, Technology, Engineering and Math). There have been fewer academic studies and media coverage about boys’ under-performance in reading. This is surprising, since it might offer an explanation for boys’ lagging educational attainment today.

Not too long ago, women were lower educated than men throughout the world. In the second half of the 20th century, the gender gap shrank until it reversed into a female-favorable gap around the 1990s in most Western countries. In most of the Western world, however, blue-collar jobs traditionally held by men are being transferred to developing countries. Since then, some policymakers have started to worry about boys’ underperformance in education.

Girls across 37 countries all have higher reading scores than boys, although there is substantial international variation. Could it be that girls just have more talent for language than boys?

Explanations for gender differences in skills often refer to biological or neurological traits of girls and boys. It appears the gender gap in reading performance is not equal between countries, whereas biological and neurological differences between girls and boys are very unlikely to differ (greatly) internationally. If girls had more talent for language than boys only because of biological or neurological traits, this would presumably result in a similar advantage for girls in all countries. As this is not the case, the question is how the international variation in the gender gap in language skills can be explained. As social and institutional factors differ greatly between countries, it is likely that they affect how much girls outperform boys in reading.

Previous studies have convincingly shown that educational systems influence educational inequality between students from different socioeconomic backgrounds, but it is interesting to also consider whether they relate to international variation in educational gender inequality. In particular, what is the influence of standardization on gender inequality in reading performance? Standardization refers to the freedom schools have to choose their own textbooks and, courses and course content. If they can decide on these matters themselves, the level of standardization is low. If these decisions are made by a national or lower level government, standardization is high. It is also important to consider differentiation, the age students are selected for tracks in secondary education.

Standardization negatively affects the reading performance of both girls and boys, but this effect is stronger for boys. In countries where teachers and schools have little freedom to choose their own books, courses and course-content, like Greece, boys’ disadvantage in reading is largest. In less standardized countries, like the Netherlands, the gap is considerably smaller. This may be because individual teaching is especially important for less motivated and skilled students, many of whom are boys. Girls’ reading scores are lower when they are selected for tracks at an early age (the age of selection does not affect boys’ reading performance), meaning that in early differentiating countries the female-favorable gender gap in reading is smaller. This could be related to sex differences in brain development that start to emerge during puberty.

It is clear that gender inequality in reading performance is affected by the organization of a country’s educational system. This means that if countries are concerned with tackling boys’ educational under-performance it may be important to critically assess structures of schooling. More freedom for schools to pick textbooks and determine course (content) could increase boys’ reading performance.