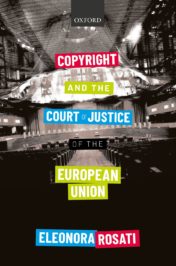 Copyright and the Court of Justice of the European Union

Copyright is an intellectual property right that vests in original works. We know that works like novels, paintings, photographs, sculptures, and songs are examples of what copyright law protects.

Unlike more traditional works, which are perceived through senses like sight and hearing – that is, through mechanical senses – perfumes and tastes can be only perceived through chemical senses, such as smell and taste. This makes interpretation of what one is trying to protect potentially complicated.

In the past, courts in France and the Netherlands were indeed asked whether a perfume could be protected by copyright. While the French Supreme Court answered Non! on consideration that the smell of a perfume could not be defined objectively, the Dutch Supreme Court said Ja! and considered that a smell could also be protected by copyright. This in practice has meant that, while in France, perfumers could not rely on the additional protection offered by copyright for the life of the perfumer and 70 years after their death, in the Netherlands perfumers found themselves able to prevent copying of their fragrances by using copyright as a weapon.

Recently, in the Netherlands, the producer of a spreadable cheese, Heks’nkaas, sued a competitor over the marketing of a taste-alike cheese, claiming that – by copying the taste of Heks’nkaas – the defendant had infringed the copyright.

The court in the Netherlands that had to decide the action was unsure whether the taste of a cheese could be protected by copyright, so it asked the Court of Justice of the European Union to clarify this point. The court said that, in order to be considered a work and thus be eligible for copyright protection, the object at issue, the cheese, must be expressed in a manner which makes it identifiable with sufficient precision and objectivity. This requirement is meant to allow both competent authorities (e.g. courts) and interested third parties, (e.g. competitors) to identify – clearly and precisely – the object in respect of which protection is claimed.

It’s very difficult to identify the taste of a food product with precision and objectivity. This makes it different from a literary, pictorial, cinematographic, or musical work, which is a precise and objective form of expression. The taste of a food product, the court said, “will be identified essentially on the basis of taste sensations and experiences, which are subjective and variable since they depend, inter alia, on factors particular to the person tasting the product concerned, such as age, food preferences and consumption habits, as well as on the environment or context in which the product is consumed.”

But the court did not rule out that in the future people may develop systems making it possible to define objectively what a perfume or a taste are, in a way similar to international colour classification codes like Pantone. This means that also these less conventional works might be protectable by copyright.

In addition, the court appeared to suggest that different outcomes, like those occurred in France and the Netherlands in relation to the protection of a perfume, would no longer be possible: the same object must be protected in accordance with the same criteria across Europe. This might have significant implications for those countries, like the United Kingdom, Ireland, Austria, and Cyprus, which only admit copyright protection in a limited number of works. The result has been, for instance, that in the past UK courts have denied protection to the Stormtrooper Helmet from the Star Wars films and the assembly of the scene photographed for the cover of Oasis’s Be Here Now 1997 album. The reason for denying protection was that neither object could be accommodated within one of the eight categories recognized under UK copyright law. After the cheese case things might change, and countries in the EU would need to acknowledge that copyright can subsist even in less conventional objects, insofar as they are works in the sense clarified by the court.

Feature image credit: “Too many to count” by Elisa Michelet. Public domain via Unsplash.

Dr Eleonora Rosati is an Italian-qualified lawyer with experience in the areas of copyright, trademarks, fashion and internet laws. She is a tenured associate professor in Intellectual Property Law at the University of Southampton, where she leads the IP/IT research centre iCLIC, an Of Counsel at Bird & Bird LLP, and the Editor of the Journal of Intellectual Property Law & Practice. Eleonora has written extensively in the IP field, and regularly comments on IP issues for well-known blogs The IPKat and The 1709 Blog, for which she has authored several hundreds of posts over the past few years. She has also prepared technical briefings at the request of and delivered talks to international organizations and EU institutions and agencies (e.g. WIPO, European Parliament, European Commission, EUIPO), as well as international professional bodies and organizations (e.g. ALAI, INTA, AIPPI, LIDC, ECTA). She is the author of Copyright and the Court of Justice of the European Union.