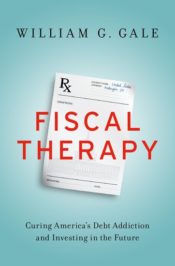 The American economy is in great shape in many ways. Riding the cusp of an expansion that started in 2009, the stock market is up, consumer confidence is booming, and unemployment has fallen to historically low levels. But trouble looms. America faces two distinct but related challenges that policymakers must address in the coming years.

The first challenge is rising government debt. Under current policies, debt will rise steadily to unprecedented levels over the next decade and to unsustainable levels over the next 30 years and beyond. Debt isn’t always bad – we’ve had good reasons to borrow in the past to fight recessions and finance investments. Nevertheless, if we don’t rein in the growing debt, it will make it harder respond to wars or recessions, address social needs, and maintain our role as a global leader. This is not a tax problem or a spending problem any more than one side of the scissors does the cutting.  It’s the imbalance between the two that creates the problem.  Addressing the debt will require both slowing the spending trajectory and raising taxes.

The second challenge is changing the way we tax and spend. The nation has increasingly split into a fractured society with groups separated by disparities in income, education, and opportunity. This growing divide is not only inequitable, it is wasteful, reducing opportunities for tens of millions of Americans. To make Americans more productive and expand opportunity, we need more public investment— in education, healthcare, childcare, nutrition, infrastructure, and scientific research. However, public investments in these areas (other than healthcare) are slated to shrink as a share of the economy to lower levels than any time in the previous half century.

Social Security, Medicare (for the elderly), and Medicaid (for some of the poor and elderly) are among America’s most popular and successful programs. Social Security provides more than half of retirement income for about two-thirds of retirees, while Medicare and Medicaid finance healthcare for tens of millions of households.  But these programs also drive the increase in federal debt, as an aging population and rising healthcare costs boost federal spending over time.

For healthcare, the way to reduce cost is to increase competition in Medicare via a premium support system, pay providers based on outcomes rather than services rendered, and allow Medicare to negotiate drug prices directly. Health insurance coverage could rise via expansions of Medicaid and private insurance. It’s also important to raise the full retirement age for Social Security, create new protections for early retirees and low-income households, and raise the payroll tax base and rates.

Invest in the future

Safety net programs have proven beneficial impacts. They reduce poverty and crime and raise educational attainment, future earnings, and health status.  From a public perspective, they are good investments.  It’s therefore important to boost spending on social policy substantially, by a full percentage point of GDP, through 2050 and focus on five areas: investing in children, increasing participation in safety net programs among those who are already eligible, raising educational attainment, increasing employment, and boosting wages of low-income workers.

To resolve the nation’s fiscal problems, however, we will need more revenue than what can be obtained through reform of existing taxes.

A good tax system raises the revenues needed to finance government in an equitable and simple way. To finance the added public investments, encourage growth, rein in long-term debt, and distribute tax burdens fairly both within and across generations, we need to raise and reform taxes.

In the income tax a key imperative is to raise taxes on high-income households. Households in the top income groups have experienced enormous income gains, in relative and absolute terms, over the past 30 years, but their taxes have not gone up as a share of income.  In a progressive tax system, this is inappropriate.   Raising taxes on high-income households is the only way to have them share significantly in addressing the fiscal burden. To that end, we should close capital gains loopholes, repeal the business pass-through subisidies in the 2017 tax overhaul, and replace the mortgage interest deduction with a first-time homebuyers’ credit, increase taxes on estates and inheritances. Another problem with the current system is that evasion rates are high – about one-sixth of all taxes owed are not paid. Increasing the IRS budget would help address this issue.

To resolve the nation’s fiscal problems, however, we will need more revenue than what can be obtained through reform of existing taxes.  There are two logical and plausible new taxes to consider.  The value-added tax – in existence in 160 countries around the world – would tax consumption and raise significant revenue without hurting saving and investment.   A carbon tax would boost the fiscal status further, correct the underpricing of carbon emissions, and provide significant environmental benefits.  Both new taxes could be accompanied by measures to offset the burdens on low- and middle-income households.

Through our tax and spending policies, we can expand our economy or let it wither; make society more equal, or less; expand opportunity or continue to let tens of millions of struggling families fend for themselves. There is a way to pay for the government that people want, and shape that government and the economy in ways that serve us all.