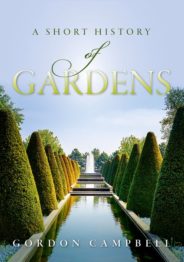 A Short History of Gardens

Most gardens are in predictable places and are organised in predictable ways. On entering an English suburban garden, for example, one expects to see a lawn bordered by hedges and flowerbeds, a hard surface with a table for eating al fresco on England’s two days of summer, and a water feature quietly burbling in a corner. In warmer places, such gardens are not necessarily expected yet are still there. Some years ago I happened to be passing through the Iranian city of Abadan, at the southern end of the Iran-Iraq border. It is one of the hottest populated places on the planet, and in 1964 a heat burst raised the temperature to a record-breaking 87°C (189°F). During the Iran-Iraq war the city was shelled, bombed, and burnt. Gardening was not a high priority. When I travelled through the town on a warm winter’s day, my bus was diverted because of construction, and I found myself in a residential area inhabited decades ago by British employees of the Anglo-Persian Oil Company. The houses are now occupied by Iranians, some of whom have maintained English gardens. I saw one man clipping his hedge, and another pruning roses.

Such English gardens are memories of affirmations of identity and of memories of England, and they are to be found in many places far from England. I have visited an English cottage garden on an island off West Falkland. In Pakistan, the former colonial hill-town of Murree (apparently named after the Blessed Virgin Murree, known in the Islamic world as Maryam, who is said to be buried there) is planted with English trees (maple, oak, and pine), and some of the houses have lawned gardens. Similarly, the road leading from Dehradun up to the Indian hill station of Mussoorie takes one past a house that one would not be surprised to find in Surrey. A plaque on the gate announces it as the residence of a British colonel-of-foot; I imagine his moustachioed ghost tending the flowers in the garden.

In Japan and China, many gardens gesture towards the remote origins of distinguished ancient civilisations. In Japan, the folk beliefs and ritual practices eventually known collectively as Shinto centred on the spirituality of the natural world, and shrines erected at sacred outcrops and groves were surrounded by gardens consisting of white sand and small stones, which seemed to signify ritual purity. Japanese gardens have evolved over the intervening centuries, but still retain this animistic spirituality, and sand and stones appear in the most contemporary of designs. Similarly, there is an aesthetic of rocks (shared with the gardens of China and Korea), which are valued for their sculptural qualities. Rocks in ponds or dry landscapes often represent the legendary gardens of the immortals, and thus have a richness for Asian visitors that baffles innocent Westerners. In the West, gardens are centred on horticulture, so an Asian garden centred on stones comes as something of a shock.

Gardens often surprise the visitor, and sometimes we are left grasping for explanations. The floating islands of Lake Titicaca, in Peru, are constructed from totora reeds harvested from the lake; the same reeds are also used for the houses and boats used by the Uru people who live on the islands. In this botanical monoculture, it is surprising to see small decorative gardens planted with shrubs and flowers native to much lower altitudes. Do such gardens represent a memory of the land? My command of Aymara was insufficient to ask the question.

Gordon Campbell is Fellow in Renaissance Studies at University of Leicester. His most recent books for OUP are The Hermit in the Garden: From Imperial Rome to Ornamental Gnome and A Short History of Gardens.