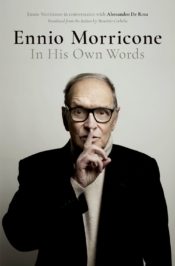 Ennio Morricone: In His Own Words

Over his esteemed six decade career, Italian composer Ennio Morricone has scored hundreds of movies across numerous genres, most famously the Spaghetti Westerns of Sergio Leone. Many of his most iconic musical cues—to name just three, the coyote-like “wah-wah” of The Good, the Bad, and the Ugly, the haunting harmonica from Once Upon a Time in the West, and the distinct oboe of The Mission—have transcended their films to cement their place in popular culture, referenced in cartoons and commercials, played at sporting events, and even performed by metal bands in concert. Additionally, today’s English-speaking audiences may be familiar with some lesser known pieces from Morricone’s early career in Italy due to their inclusion in recent Quentin Tarantino movies.

Below are excerpts of Ennio Morricone: In His Own Words, a conversation between Morricone and fellow composer (and former protégé) Alessandro De Rosa on life and music. Accompanying these insights are some of the composer’s most influential pieces from cinema.

Morricone detailed how he created the legendary “wah-wah” sound in the main theme to Sergio Leone’s masterpiece:

I thought that I might come close to this effect by overlaying two hoarse male voices, one singing “A” the other singing “E” somewhere in between sforzato and falsetto. I went to the recording room, talked about it with the singers, we recorded the voices and added a light reverb and the effect worked. Then I continued this incipit by emulating vocal sounds through the wah-wah effect, which trumpets and trombones obtain by moving the damper back and forth, an effect typical of brass bands in the twenties and thirties.

Morricone experimented with electric instruments to get the haunting theme played at the film’s climax, “The Ecstasy of Gold”:

Along with Edda Dell’Orso’s voice, there was also a distorted electric guitar producing a kind of piercing cry.  I noted on the score “distorted electric guitar” and two notes: c and b. [Guitarist Bruno Battisti] D’Amario could freely oscillate between the two pitches with quarter-tones, and I added synthesized sounds as well. These little inventions were very rewarding, and gradually I enriched them with more and more electronic instruments.

A harmonica played a major role in the plot of Leone’s 1968 Western, thus becoming a central element of Morricone’s score:

The harmonica is the instrument we see in the hands of one of the protagonists, but it gradually turns into a symbol of revenge. From its tangible presence on screen it leads the mind to grasp what the eye cannot reach, transcending the here and now.

Leone’s camera movements for Once Upon a Time in the West related directly to Morricone’s score because the music had been completed before filming began, the opposite of how films are normally scored. This worked especially well in a scene introducing one of the film’s main characters:

Only at that moment does Edda Dell’Orso’s voice enter, followed by a rapid crescendo on the horns leading into the full orchestra, which Leone synced to an upward pan shot of the dolly moving from the window to Jill entering the village. Visually, you move from a detail shot to an establishing shot of the town, and musically from an isolated voice to the full orchestra.

For the politically-charged 1971 film, Morricone collaborated with singer Joan Baez at the peak of her career:

Unfortunately I did not have the orchestra at my disposal. I was forced to realize an arrangement with the rhythmic section alone: a piano, a guitar, and a set of drums….She sang beautifully, but I had to handle the mix with great attention in order to create uniformity: her identity and that of the orchestra, which we recorded afterwards, needed to blend as well as possible.

Often thought to be one of the biggest slights in Oscars’ history, Morricone’s unforgettable score for The Mission lost at the 1987 Academy Awards. Like the harmonica in Once Upon a Time in the West, an instrument shown on screen featured heavily in the score:

I started with [main character Father] Gabriel’s oboe theme: it’s written in a post-Renaissance style, with all the ornamentations that were typical of that period—grace notes, mordents, grouplets, and appoggiaturas. At the same time, I tried to mimic the way the actor moves his fingers on the instrument in the sequence of his first encounter with the Guarani [natives] who surround him above the falls, firmly intentioned to kill him.

Morricone discussed his use of Beethoven’s “Für Elise” in a piece called “The Verdict” for The Big Gundown (1966) and its life beyond that movie, such as its appearance in the opening of Quentin Tarantino’s Inglorious Basterds:

The movie sold so well that [director Sergio] Sollima started to consider it a lucky charm, so from then on he wanted to open every new film with that quote. I did so for his two following movies. When Tarantino utilized it, there was no reason in trying to justify the presence of that quotation… why? What could I object to at that point? If you like it so much, keep it…

Again surprised by Tarantino’s method of selecting music, Morricone questioned the director’s use of his demo track in Django Unchained:

He liked it so much that he put it directly in the film, without waiting for the final mix, which eventually was released only in Elisa’s official album. Tarantino is famous for his very peculiar way of dealing with music, but that time he went so far as to use a provisional version!

In February 2016, The Hateful Eight finally won Morricone a competitive Oscar. Coming at 87, and after 5 previous nominations, it served as a long-awaited feather in the cap of his outstanding career. Yet today, even at the age of 90, the maestro is not entirely finished. His last tour as a conductor will conclude this summer, and there were reports that he would be contributing in some way to Tarantino’s next movie.

We’ll end now with Ennio Morricone’s response when asked if his music will stand the test of time:

Luckily, I don’t have to judge myself; history will put all these day-to-day events in perspective….Music is mysterious; it doesn’t offer many answers. Film music, on the other hand, is even more mysterious at times, both because of its bond with images and because of its way of bonding with the audience.

We think it will.

Steven Filippi is a Marketing Coordinator for Music, Art, and Film at Oxford University Press. All of the above quotes by Ennio Morricone have been excerpted from Ennio Morricone: In His Own Words, edited by Alessandro De Rosa.

The surviving letters of Jane Austen