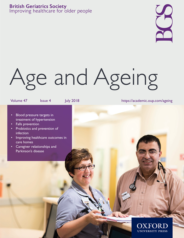 Age and Ageing is an international journal publishing refereed original articles and commissioned reviews on geriatric medicine and gerontology. Its range includes research on human ageing and clinical, epidemiological, and psychological aspects of later life.

Age and Ageing is the journal of the British Geriatrics Society, improving healthcare for older people.

With increasing age, blood pressure rises as a consequence of arterial stiffness, caused by the biological process of ageing and arteries becoming clogged with fatty substances, otherwise known as arteriosclerosis. Large hypertension trials showed that lowering blood pressure in people over 60 is beneficial and lowers the risk of heart attacks, stroke, and all-cause mortality, even in people over 80. Since arterial hypertension, high blood pressure in the arteries, is the most important preventable cause of cardiovascular disease, it seemed obvious for at least two decades to treat hypertension without restrictions even patients over 60.

However, when it comes to the growing population group of people over 80, this may no longer make sense in all, as many of these people tend to have long-term conditions, take a lot of medicines, and have increased frailty. In addition, patients with these characteristics are often excluded from trials and therefore evidence lacks generalizability. Furthermore, observational studies raise concerns about lowering blood pressure too much, since there are several cohort studies showing that people with lower blood pressure tend to face more problems with dementia and are actually more likely to die.

However, current international guidelines for treating high blood pressure still tells doctors to lower blood pressure to low values of even <130mmHg, in almost all patients from the age of 60 years, equivalent to normal blood pressure. The implication for systolic blood pressure to be lower than 130 mmHG is usually fine for the healthier elderly; however, it is very low for those who are frail. This has fuelled discussions about the benefits and harms of lowering blood pressure too much in older patients, especially when they are frail.

Since the appropriateness of lowering blood pressure remains controversial in the oldest-old, we followed patients drawn from the general population for five years to test whether low blood pressure in patients receiving antihypertensive medicine, leads to cognitive decline and increased mortality compared to patients with higher blood pressure.

…a more individual approach instead of “one size fits all” seems most appropriate and is also more patient-centered.

Doctors thinking about prescribing blood pressure lowering therapy in older patients should consider the specific patients and their therapeutic goals. In the light of these findings, a more individual approach instead of “one size fits all” seems most appropriate and is also more patient-centered. This is especially important for very old and frail patients not just to follow those guidelines, in which people over 80 or frailty have been less considered.

Professor Sven Streit, MD, MSc PhD, is a practicing general practitioner (GP) in a rural community (Konoflingen) and Assistant Professor of General Internal Medicine and Primary Care at the University of Bern. His main tasks, beside seeing patients, is to conduct research (PI of the OPTICA and LESS study and others) and is responsible for the postgraduate GP training program, engaging in teaching medical students, nurses, residents, and young GPs. He is past-president of the Swiss Organisation of Young GPs (JHaS) and served as chair of the European Organisation of Young GPs (VdGM).

Professor Streit is a medical doctor (MD) and Senior Lecturer (Privatdozent) at the University of Bern and is board-certified in General Internal Medicine. He trained in epidemiology (MSc) at the London School of Hygiene and Tropical Medicine and at Leiden University in the Netherlands (PhD). He leads international collaborative research projects and represents Switzerland in the European General Practice Research Network (EGPRN).