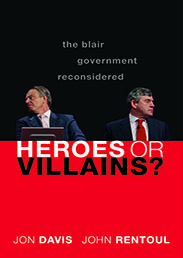 Tony Blair is one of the great conundrums of our time. We all know his legacy, from the widely-condemned invasion of Iraq to bequeathing a great National Health Service to the United Kingdom. But how he governed, how decisions were made, is still hotly debated. Was he radical, was he “unconstitutional”?

Public service reform, from foundation hospitals to academy schools, under Blair was vast, all with the backing of massive financial investment and spending. But his reform of the Civil Service was much more limited. The area where he was undoubtedly different is in his use of special advisers, nowadays often shortened to “spads.”

It was only in the late nineteenth-century that the difference between politicians and civil servants became an iron demarcation. The idea of spads, or irregulars as they were known then, emerged during the pressures of the First and Second World Wars when the best from outside government—such as business people and academics—were needed inside. Their services were dispensed with as soon as each war ended.

Spads re-emerged in 1964 when the new government of Harold Wilson brought in a small number of high-profile left-leaning economists as unelected appointees, technically temporary civil servants who provided specialist skills that the Civil Service could not and political commitment it would not. Every government since has followed suit and numbers have crept up. Margaret Thatcher began her premiership with single figures but these had doubled by the time she left office. They doubled again under John Major to 38 in 1997. Blair initially doubled them again from 38 to 70, and they rose to 84 in 2005, before falling back to 73.

Blair’s spads were a step change in power and for the first time so far contained figures who would become household names. Alastair Campbell was perhaps the best known from the first days and one who as press secretary and later director of communications in No. 10 Downing Street came to personify another Blair-era concept: spin. David Miliband was also in No. 10 as the young head of the Policy Unit. Both Ed Balls and Ed Miliband joined Chancellor Gordon Brown in HM Treasury. Balls was especially was very powerful, described by some as the deputy chancellor, and he became in effect the inescapable single conduit between the mighty Treasury and the complicated chancellor. David Miliband rose to become Gordon Brown’s foreign secretary; Ed Miliband succeeded Brown as leader of the Labour Party. Balls became Miliband’s shadow chancellor of the Exchequer.

The spads of New Labour formed a significant new third tribe of government, a development that occasioned a short-lived furore. Indeed, as Blair observed “it was considered by some to be a bit of a constitutional outrage” — though the House of Commons Public Administration Select Committee thought the issue generated “more political heat than useful light.” Blair basically summed up the issue when he asked “why shouldn’t you, if you are the elected government, have people who support what you are doing?”

By their very nature, spads encroached on the traditional power of the senior civil servants. Otherwise known as mandarins, senior civil servants had grown accustomed to being at the very apex of British government. Indeed, the top mandarin, the cabinet secretary, traditionally sits next to the prime minister around the cabinet table taking the minutes. He is — quite literally — the PM’s right hand man. The mandarins’ power had grown during the twentieth century and reached an apogee during the pendulum politics of the 1970s when unsettled governments came and went after a few years and the Civil Service provided stability.

While Thatcher’s spads had their moments, it was under Blair that this inevitable power struggle came to the fore. From Campbell’s reform of government presentation to Balls’s reshaping of the Treasury hierarchy, mandarins were sidelined.  But the most significant conflict came within No. 10 Downing Street in the early years with Jonathan Powell’s appointment as chief of staff. The seniority given to this role by Blair challenged the cabinet eecretary and difficulty ensued. While there had only been twelve cabinet secretaries from the office’s creation in 1916, Blair’s decade saw four different ones.

Eventually, a new equilibrium emerged. Spads are now an essential component of British government. The role of chief of staff has survived, too, even through tough times such as the aftermath of the 2017 general election and Theresa May’s enforced sacking of her dual Chiefs.

But some aspects have snapped back into place. While spads are still a part of government, they are no longer anywhere near as prominent. Indeed, even for those in the political game, it’s not easy to name many. And the long years as a career civil servant of the late Lord Heywood of Whitehall (under first Blair, then Gordon Brown, followed by David Cameron and May) proved that the space for a politically impartial, firm gripper of policy at the very centre of government, is very much alive. During the UK’s existential Brexit angst, the country will need Heywood’s successor, Sir Mark Sedwill, in a way that his predecessors would very much approve.

Feature Image: House of Parliament by Lies Thru a Lens. CC BY 2.0 via Wikimedia Commons.

Dr. Jon Davis is Director of The Strand Group at The Policy Institute, King's College London, and author of Prime Ministers and Whitehall (2007). With John Rentoul (co-author of Heroes or Villains), he is lecturer and coordinator of several other teaching modules including 'The History of the Prime Minister since 1945—in partnership with No. 10 Downing St', and 'The Treasury and an Introduction to Economic History—in partnership with HM Treasury'. He worked as an investment banker before turning to an academic career, and also spent a year in the Cabinet Office's Modernising Government Secretariat.

Truth and truthfulness in democracy (and the problem of Brexit)