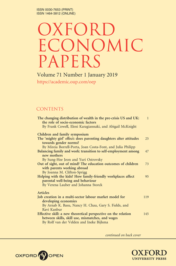 Today, almost three quarters of women with dependent children are working mothers, an increase of 1.2 million over the last two decades. However, this figure hides a substantial gender gap in full-time employment.

The latest figures of the Office for National Statistics show that while more than 9 in 10 working fathers work 30 or more hours a week, only half of working mothers do. Among couple families with both parents in employment, the most common way of organising their activity is for the father to work full-time and the mother to work part-time (49 percent).

While the UK gender pay gap, currently at 8.6 percent among full-time employees, is at its lowest in history, progress towards closing the remaining pay gap has slowed over the last decade.

In addition, women still stem the bulk of housework, meaning they are the ones having to manage the double burden of managing employment and domestic work.

Arguably, some of the root causes for the latter facts are related to the persistence of traditional social norms with regards to gender roles at work and in the household. It is thus important to accelerate changes in people’s attitudes towards gender roles, which haven’t kept pace with changes in the workplace. In this context, it is important to know whether attitudes are malleable and hence how effective efforts to change gender role attitudes and stereotypes can be.

Researchers who have looked at this subject are divided. While some posit that attitudes can change over the life course, others argue that they are formed before adulthood and remain fairly stable thereafter.
We explored this question in greater detail by studying the effect of raising daughters on parental attitudes. We used data from the British Household Panel Survey on 6,332 women and 5,073 men with at least one child under the age of 21 living in their household, covering two decades up until 2012. Parents were asked to rate their agreement with the statement “A husband’s job is to earn money, a wife’s job is to look after the home and family,” on a five-point scale ranging from “strongly agree” to “strongly disagree.”

While we find no effect on mothers, the findings reveal that – controlling for a set of confounding factors including age and number of children – fathers are less likely to hold traditional views on gender roles if they raise a girl. Fathers’ likelihood to hold traditional views declines by 8 percent when their daughters reach primary school age and by 11 percent by secondary school age. This timing coincides with the period during which children experience a stronger social pressure to conform to gender norms.

This shows that gender attitudes are malleable and can be shaped by adulthood experiences, at least in industrialised societies such as the UK. Against the background that the persistence of traditional views on gender roles can be a barrier to achieving gender equality inside and outside the workplace, these results are encouraging.

Our findings may extend to other areas as well. For example, while some men might not be attentive to evidence of gender pay gaps and sexist stereotypes, as fathers of daughters they may be. It is possible that through parenting, fathers see the world through a female lens, triggering this shift in views.

Mireia Borrell-Porta is a visiting Fellow, former PhD student and teaching fellow at the European Institute, London School of Economics.

Joan Costa-Font is Associate Professor (Reader) at the Department of Health Policy and the European Institute, London School of Economics, and a fellow of IZA and CESifo. His current research focuses on behavioural, institutional and health economics.

Julia Philipp is a PhD candidate at the Department of Social Policy, London School of Economics, and affiliated with the Centre for the Analysis of Social Exclusion. Her research focuses on the economics of gender, work, and education.

How paternity leave can help couples stay together