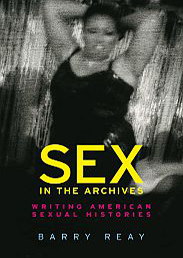 Sex in the archives

The Baltimore photographer Amos Badertscher has been cataloguing queer lives in his city since the 1960s: male sex workers and their girlfriends, the 1990s Baltimore and Washington club culture, transgender people, crack and heroin addiction, and the impact of AIDS. His is the largest extant photographic record of the short lives of hustlers (male sex workers) that I know of. Though he could by no means be described as famous, Badertscher enjoyed a brief period of academic notice with the publication of Duke University Press’s Baltimore Portraits in 1999, and his work featured in a 2016 exhibition in the Leslie-Lohman Museum of Gay and Lesbian Art in New York. His work is intensely personal. This is no dispassionate chronicle of the sexual life and culture of a major US city.

Club Kids (1999) is merely one in Badertscher’s vast collection of photographs. The central male figure in Club Kids, flanked by his topless female friends, is young, slim, and relatively clean-cut. He appears detached, the object of desire: the other figures in this image (including Badertscher with his Nikon) are attentive, the women with their arms draped around his waist and neck and the blond with her hand resting on his crotch, the centre point of the photograph. Who is the young man? Is this group portrait a fashion shoot, or something else? The female subjects, whose bodies are either turned inward towards the male or hidden behind him, although their breasts are visible, are secondary figures. It is the male’s open, forward-facing stance that invites admiration, which holds the photographer’s attention (eye contact is implied through the mirror used to photograph the group). The posing of the females suggests the male’s heterosexuality; he has his arm around one woman and the other is touching his hand. But the presence of the photographer hints at (perhaps one-sided) same-sex desirability. The man’s youthful masculinity is pivotal. However, so too is the three’s engineered androgyny, the most obvious representation of which comes from their shared wardrobe. All three are wearing baggy jeans with boxer shorts visible above the top of their pants (a classic 1990s American masculine fashion-statement) and the fact that all three are topless. Or does the portrait hint at something more? Bisexuality? Queer sex? Are the two female clubbers lesbians? Are they posing before, or after, group sex? We can probably agree that the image is palpably sexual; while the nature of that sexuality is unresolved, it is unlikely that Badertscher is endorsing heteronormativity. It is a queer historical image within a larger archive of queer history in Baltimore.

When Branka Bogdan (my co-researcher and co-writer on things Badertscher) and I first came across this photograph in Amos’s Baltimore basement studio/office, he explained that it captured a chance encounter with young aficionados of the late 1990s club scene. He met them at a gay pride block party near the city’s famous gay club the Hippo during the summer of 1999. The kids “basically pursued raves in and out of state.” The brief narrative written in hand around the photograph, Badertscher’s trademark, corroborates his astonishing memory about thousands of such interactions. What we also learned was that the photographer was mainly interested in the young man but that he could only persuade him to pose if the young women appeared alongside him. Badertscher was/is extremely attracted to female as well as male androgyny, but in this instance his focus is more on the male. The photographer’s presence within the frame in Club Kids may perhaps seem unusual to those who first encounter his work but is typical of many of the images he took. The photograph is representative not only of this artist’s extensive oeuvre and of his take on urban Baltimore’s street culture, but also of that culture’s constructions of gender and sex.

But my favorite archive of all is Amos Badertscher’s intensely intimate, lifetime photographic dossier on Baltimore’s sexual cultures, a supreme example of where today’s personal obsession can become tomorrow’s archive.

Barry Reay is a professor of history at the University of Auckland and author of Sex in the Archives: Writing the Histories of American Sex.