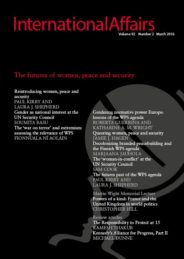 One hundred years ago, the treaty of Versailles, the centerpiece of a set of treaties and agreements collectively known as the Paris Peace Settlements, was signed in the glittering hall of mirrors in the former home of France’s Sun King. For some, the war it brought to an end marked the final chapter of a distinct period in international relations, one dominated by a European states system that had endured since the Middle Ages and in which military conflict was relatively commonplace.

Anniversaries impose a misleading unity on a period of history. Nevertheless, it can still be useful to reflect on where we once were, what has changed, and what the prospects for the future might be. 2019 represents a moment of transition in both domestic and international politics. The backlash against globalization, the rise of intolerant and anti-democratic populisms, the tensions between rising and declining powers as well as the withdrawal of the United States from its hegemonic global role, are all calling into question norms and institutions underpinning a twentieth century world order many had taken for granted.

There are suggestive and sometimes troubling parallels between 2019 and 1919. At both moments, the world witnessed a retreat from globalism, the rise of nativist and populist political parties, demands from national movements for their own states, the spread of international revolutionary movements—Bolshevism then, radical Islamism today—and concerns about the absence of international order. One prominent observer speaks of a “concerted attack on the constitutional liberal order.”

Many of the challenges that concern us today—ethnic nationalisms, building the foundations for peace and prosperity around the globe, managing and containing war, or the future of Europe—were discussed in Paris a hundred years ago. This raises important questions. If we do not have strong international institutions and norms, if great power rivalries continue to lead to trade wars and arms races, are we in danger of a repeat in some form of the 1910s or the 1930s? Do we risk another “unqualified failure” in achieving collective economic goals? Are we destined for war?

Anniversaries impose a misleading unity on a period of history.

We are seeing a resurgence of chauvinistic nationalisms, a revived use of vilification and fear of others, demands for protectionism, and a growing isolationism in the United States. This may well play out, as it has done before, in rivalries and competition among nations. We may, in some cases – take empire, for instance – have concluded too soon that some phenomena are things of the past. While the European and Japanese empires have long since gone, imperialism and multi-national empires still exist, although we have found different terms to describe them.

Yet the circumstances of 2019 are significantly different from those existing in 1919. President Donald Trump appears to be undermining institutions and practices traditionally viewed as hallmarks of US prestige. International society is a more far diverse place than it was one hundred years ago, involving participants who bring along with them a broader range of cultural legacies. And military technology has moved on. It now has the capacity to end the human race.

Empirical shifts in thinking about international relations might mask more profound structural continuity. Others see not similarities but differences and ruptures. Scholars disagree about the meaning of history as it is written, the uses of history for life and politics, and the ways that history shapes behaviour. Thinking about enduring international issues through the prism of the past helps us to better take stock of our world today and our ideas as to where it might be going. To do so is also to help to bridge the divide between political scientists and historians which, while perhaps not a pressing issue for those in the real world – too often prevents those on each side benefitting from the knowledge and analytical tools of the other with consequently deleterious impacts on our understanding of the world we live in.

Anand Menon is Professor of European Politics and Foreign Affairs at King's College London. He also directs the ‘UK in a changing Europe’ project.

Patrick Quinton-Brown is a doctoral candidate in the Department of Politics and International Relations at the University of Oxford and a former lecturer at University College, Oxford.

Together, they guest-edited a special issue of the journal International Affairs, titled ‘World politics 100 years after the Paris peace conference’.