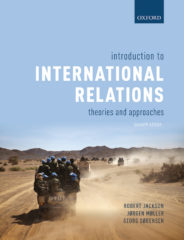 Offering unrivalled coverage of classical theories, contemporary approaches, and current issues, together with an exceptionally clear writing style, Introduction to International Relations provides a genuinely accessible and engaging introduction to the subject.
With an emphasis on theoretical approaches and their application to the real world, the authors encourage readers to consider the strengths and weaknesses of the arguments presented, and the major points of contention between them. In this way, the text helps the reader to build a clear understanding of how key debates in the discipline are connected with each other and with our perceptions of developments in the contemporary world.

According to Cicero, history is the teacher of life (historia magistra vitae). But it seems fair to say that history has not been the teacher of International Relations. The study of international relations was born 100 years ago to make sense of the European international system, which had just emerged from four years of warfare. Ever since, the field has remained remarkably Eurocentric. Virtually all major theories have been formulated to understand the international system that arose in Europe in the 17th and 18th centuries and expanded to become the first ever global state system in the 19th and the 20th centuries.

At the same time, however, many international relations theories have much wider pretentions. Take the most influential of all such theories, Kenneth Waltz’s neorealism. Waltz’s most general insight is that sustained domination by one power in international relations is a near impossibility because power accumulation in one state triggers efforts at emulation by other states (internal balancing) and the formation of hostile coalitions (external balancing). Waltz derived this insight from the European and later global state system, which for a thousand years has seen repeated attempts of long-term domination fall through due to balancing. But Waltz holds that this generalization applies “through all centuries we can contemplate.” This is neatly illustrated by his famous analogy that “[a]s nature abhors a vacuum, so international politics abhors unbalanced power.”

Recent work in the field suggests that international relations must break its European shackles and enlist historical evidence from other international systems in order to understand where the present multistate system is headed. Since the end of the Cold War scholars have become interested in the very limited attempts to balance US preeminence. They have turned to previous situations of single power dominance (or unipolarity) to investigate if this is a stable outcome in international relations – and if not, what is likely to replace it.

A good example of this scholarship is the edited volume The Balance of Power in World History by Stuart Kaufman, Richard Little, and William Wohlforth, which surveys more than forty different state systems during 7,500 years of world history. This book shows that balanced and unbalanced outcomes have been about equally common over time, and that the European system is exceptional due to the absence of single-power dominance. More generally, the authors conclude that “[u]nipolarity is a normal circumstance in world history.” Indeed, over time most multistate systems have moved in the direction of single-power dominance. This dominance has sometimes lasted for centuries. In one spectacular case, China, universal domination in the form of empire never broke up again. The Chinese imperial state was the product of a conquest that rolled up a previous multistate system – known as the Warring States – which in certain respects seems to have been uncannily similar to the later European system. However, after the unification of China in 221 BC, the area around the Yellow River and the Yantze never relapsed into an anarchic struggle between multiple states.

Strong balancing theories – such as Waltz’s neorealism – do not fare well when measured up against something like Chinese history. The European experience of a sustained balance of power, it seems, cannot be generalized to other multistate systems. The new scholarship furthermore shows that there was nothing inevitable about the global state system that we know today. Other outcomes – such as empire – might well have succeeded. On this basis, scholars have speculated that American dominance might have staying power in the 21st century. The Chinese case, in particular, underscores the potential stability of such preeminence. Not only has the Chinese multistate system never reappeared but for millennia the Chinese imperial state exerted a general hegemony over East Asia, which included Japan, Korea and Vietnam.

However, the new historical research also shows that stable single-power dominance relies on more than overwhelming power. To last, dominance must be buttressed by some form of legitimacy, anchored in some kind of common institutions, and it must avoid what has been termed imperial overstretch. Chinese rulers, for instance, knew where to stop – with a few exceptions, they did not try to conquer countries such as Vietnam, Korea, and Japan – and the hierarchical relationship with neighbours was institutionalized via exchanges of gifts for tribute and in elaborate ceremonies such as the Kowtow.

This suggests that American power may be ephemeral. Seen from this vantage point, the Trump administration’s America First agenda – including its refusal to act as a hegemonic stabilizer by shouldering the costs of international institutions such as the UN or NATO and trade agreements such as NAFTA – could be the death throes of American dominance; the desperate actions of a declining hegemonic power no longer able or willing to invest in common purposes. Along these lines, British scholar Barry Buzan has argued that regional international systems such as the East Asian one might be revived as American power falters. To understand these processes, international relations scholars would do well to start quarrying the huge material that the history of other multistate systems has left to us.

Featured image credit: “The Great Wall of China” by panayota. CC0 via Pixabay.

Zhongguo and Tianxia: the central state and the Chinese world