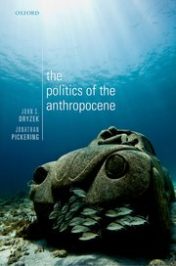 The Politics of the Anthropocene

Young people have become increasingly vocal in castigating older generations for their failure to act on climate change. University students are at the forefront of campaigns to divest from fossil fuels. A group of 21 young Americans launched a high-profile court case against the US government to pursue a legal right to a stable climate. And the School Strike for Climate initiative launched by fifteen-year-old Swedish student Greta Thunberg has attracted worldwide attention.

At the UN climate change conference in December 2018, Thunberg delivered a scathing message: “we can’t save the world by playing by the rules. Because the rules have to be changed.”

What has got the world into this predicament, what kind of change is needed, and how can it be achieved?

Humanity now exerts such a pervasive influence over the Earth’s life-support systems that we have entered a new geological epoch: the Anthropocene. A Great Acceleration in global production and consumption since the mid-20th century has brought human-induced climate change, large-scale deforestation and plummeting biodiversity.

The Anthropocene brings renewed instability to the Earth system—in contrast to the unusually stable Holocene epoch of the last 12,000 years. Without radical changes to the ways in which we produce energy, feed ourselves, and meet other basic needs, the Earth could reach dangerous tipping points including multi-metre sea-level rise and the collapse of globally significant ecosystems such as the Amazon rainforest.

The scale of the change required to reduce these risks poses unprecedented political challenges. Many of our core institutions—from nation-states to capitalist markets—emerged years ago, enabling them to ignore the ecological degradation they were causing.

Some of these institutions have helped to achieve remarkable progress. Nevertheless, these institutions—from markets that ignore environmental impacts to governments that rely on unsustainable economic activity to maintain their authority—remain stuck in what we call “pathological path dependencies.” These path dependencies decouple human institutions from the Earth system by systematically repressing information about ecological conditions and prioritizing narrow economic concerns.

How can pathological path dependencies be broken? Institutions must develop ecological reflexivity: a capacity to question their own core commitments, and if necessary change themselves, while listening and responding effectively to signals from the Earth system.

To cultivate ecological reflexivity we must confront a core paradox for institutional design in an ever-changing Earth system, no fixed model of governance is appropriate for all time. Institutions must be flexible enough to respond to changing environmental and social conditions, while stable enough to provide a framework for long-term protection of shared interests.

We call this kind of institution a “living framework.” The term calls to mind the idea of a living document that is updated over time. It also suggests the idea of a framework for living, that is, for flourishing under unstable conditions.

Achieving the reflexivity that is necessary also requires dismantling barriers to reflexive governance, including government subsidies for unsustainable practices and the ability of vested interests to undermine progressive reform. And it requires empowering agents to rethink what core societal values—such as justice, democracy, and sustainability—should mean under Anthropocene conditions.

Given that dominant agents such as states, international organizations, and corporations are often stuck in pathological path dependencies, more promising agents might include cities and sub-national governments, scientists and other experts, and those most vulnerable to a damaged Earth system.

Each of these agents has an important role to play, whether shifting dominant discourses in a more ecological direction or cultivating local experiments in sustainable living. But each kind of agent also has important limitations when working in isolation.

To overcome these limitations, societies need to cultivate interactions among agents. The best way of doing so is through democratic practices. Democracy opens up essential spaces for those most affected by environmental change—whether peasants’ movements for climate justice, citizens of small island states, or youth advocates on biodiversity or climate change—to hold decision-makers accountable.

Overcoming the pathological path dependencies that drive ecological degradation will not be easy. But, given that we cannot turn the clock back on the advent of the Anthropocene but must learn how to live with it, finding an antidote to those path dependencies is essential. The antidote, we believe, can be found in cultivating an ecologically reflexive democratic politics.

John S. Dryzek is Australian Research Council Laureate Fellow and Centenary Professor in the Centre for Deliberative Democracy and Global Governance at the Institute for Governance and Policy Analysis, University of Canberra.

Jonathan Pickering is a Postdoctoral Fellow in the Centre for Deliberative Democracy and Global Governance at the Institute for Governance and Policy Analysis, University of Canberra.