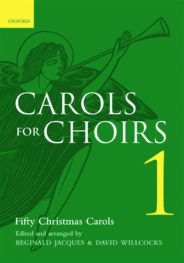 The OUP hire library is a hive of activity running up to Christmas. Months in advance, the hire librarians receive requests for perusal scores of longer Christmas works. From September, hundreds of orders for carols flood in – sometimes up to 15 carols in one order!

Singing carols at Christmas is a tradition loved by many and every year there are some recurring favourites. This year is no exception with O Come, all ye Faithful, Hark! The Herald Angels Sing, and Twelve Days of Christmas retaining the top three spots from last year. Some newer arrangements and carols have appeared in this year’s list, including Jingle Bells arranged by David Willcocks, All Bells in Paradise by John Rutter and On Christmas Night by Bob Chilcott.

Below are our top hired carols and Christmas pieces of 2018 and a few facts you may not know.

Written by Charles Wesley, this carol was first published as “Hark, how all the welkin rings/Glory to the King of Kings.”

The “five gold rings” lyric first appeared in the arrangement by Frederic Austin, and is owned by Novello. Therefore, people wishing to arrange this traditional carol must seek copyright permission if they wish to use these lyrics!

This Christmas work re-tells the Christmas story through a selection of well-known carols.

You may have heard the solo verse of Once in Royal David’s City sung at King’s College carols on Christmas Eve. To save the soloist from nerves running up to the service, the young treble singer is only told he is to sing the first verse just before the service begins. An OUP composer, Bob Chilcott, was one of these soloists!

Arranged by Pierpont arr. David Willcocks, from 100 Carols for Choirs

The lyric “Bells on Bobtail ring” refers to the style of a horse’s tail, where a tail is cut short, or gathered and tied in a knot.

The text, written by Rutter, is inspired by the fifteenth-century Corpus Christi Carol.

This carol, much like the Sussex Carol and the Coventry Carol, was named after a place, St Day in Cornwall. Soon after the first publication of a 3-verse Sans Day Carol, a 4-verse version was published in Cornish entitled ‘Ma gron war’n gelinen’. Its name was changed from St Day Carol to Sans Day Carol when published in the Oxford Book of Carols.

Angels’ Carol begins with a solo harpist, which alludes to the tradition of Christian music that the harp was the angels’ instrument of choice.

Hannah Smith is Sales and Promotion Assistant in the Music Department at Oxford University Press.

A history of the Carols for Choirs angel [gallery]