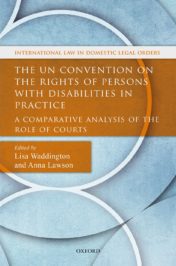 Since 1992, 3 December has been the International Day of Persons with Disabilities. According to the World Report on Disability, approximately one in five people in the world are disabled and are at heightened risk of exclusion, disadvantage, and poverty.

Law plays an important role in tackling this inequality and exclusion. For the past decade, the United Nations Convention on the Rights of Persons with Disabilities (the Disability Convention) – an instrument of international law – has been both a catalyst and guide for legislative reform enhancing the equality and inclusion of disabled people. To what extent, though, is this Disability Convention influencing domestic case law? This question has attracted surprisingly little attetion to date, despite the fact that its importance was signalled in one of the earliest cases decided by the UN Committee on the Rights of Persons with Disabilities – Nyusti and Takács v Hungary.

Nyusti concerned the failure of a private sector Hungarian bank to provide ATM machines that were accessible to blind people. The Hungarian Supreme Court had ruled that equality legislation could not help the blind claimants because they had originally become customers of the bank knowing that the ATM machines were not accessible. The Committee on the Rights of Persons with Disabilities found, however, that Hungary was in breach of the Convention for failing to take adequate steps to ensure the accessibility of banking services. The UN Committee recommended, not only that the Hungarian government must ensure that all newly procured ATMs were accessible, but also that it ensure that “appropriate and regular training on the scope of the Convention” be provided “to judges and other judicial officials in order for them to adjudicate cases in a disability-sensitive manner.”

Our recent study grapples with the question of how national courts are using and interpreting this Disability Convention. Consistent with Christopher McCrudden’s work on the UN Convention for the Elimination of Discrimination Against Women, we found that usage patterns of the Disability Convention could not be explained solely, or even primarily, by reference to the constitutional approaches taken by different countries to the incorporation of international treaties into their domestic law. We also found that, where judges did use the Disability Convention, they appeared to be using it with an eye to solving domestic problems, rather than as part of an effort to identify interpretations consistent with accepted principles of international treaty interpretation. Judgments rarely engaged in substantive interpretations of the Convention’s provisions – an omission which risks misunderstandings of core, but often counter-intuitive, Convention concepts such as reasonable accommodation (which can be mistakenly assumed to be all about housing rather than as a cross-cutting duty not to discriminate in all aspects of life) and independent living (which can be mistakenly assumed to involve living without help from others). For example, in a recent German case, the Federal Social Court interpreted “independent” as meaning that persons with disabilities should be independent of the need to rely on the help of others. This interpretation of “independent” appears to overlook the particular way in which that term is used within the context of Article 19, where the emphasis is on securing choice and control over support and not on removing the need for support.

Nevertheless, some Convention provisions did appear to be influential in driving positive case law developments. Notable examples are the Disability Convention’s broad approach to the meaning of ‘disability’ – which led the Court of Justice of the European Union to overturn its earlier case law on the point; its classification of an unjustified denial of a ‘reasonable accommodation’ as a form of discrimination – which was used by the High Court of Bombay to fill in gaps in domestic equality law; and its requirement that people with disabilities be given support to exercise their legal capacity – which was used by the Constitutional Court in Russia to find that plenary guardianship was unconstitutional, and that a less restrictive alternative was required.
Judges seldom referred to interpretations of the Disability Convention given by courts in other countries. This may in part be due to the absence of a convenient means of locating relevant cases in other countries. Or it may simply be a reflection of the fact that the judges are primarily engaged in an inward-looking exercise, focusing on issues within their own jurisdiction. Reference to the Convention’s impact on, and interpretation through, European legal systems (notably EU law and the European Convention on Human Rights) were more common. The relatively clear enforcement and implementation mechanisms associated with these regional systems provided judges with opportunities to draw on Disability Convention standards when they might otherwise have felt they were barred from doing so – eg prior to domestic ratification of the Convention (Ireland) or where there was a strongly dualist approach to international treaties, coupled with the absence of a written constitution guaranteeing rights (UK).

It seems clear that the Convention’s standards are percolating into domestic case law. The fact that most judges who use the Disability Convention do not appear to engage in detailed substantive analysis of its meaning creates opportunities and risks: opportunities for innovation and creative legal problem-solving; and risks of interpretations which are blatantly inconsistent with the object and purpose of the Convention. There are also, of course, significant risks of under-use of the Convention standards in situations where it could assist in interpreting ambiguous domestic law.

Courts and judges have an important role to play in empowering people with disabilities and securing their human rights. For this to happen, we need more information about what is happening in practice, and we need more initiatives to share relevant case law and the factors that shape it so that judges and others can learn from experiences in different countries.

Featured Image: ATM keypad with braille by redspotted. CC by 2.0 via Wikimedia Commons.

Anna Lawson is Professor of Law and Director of the Centre for Disability Studies, University of Leeds

Lisa Waddington is Professor and European Disability Forum Chair in European Disability Law, Maastricht University. They are the Editors of The UN Convention on the Rights of Persons with Disabilities in Practice: A Comparative Analysis of the Role of Courts.