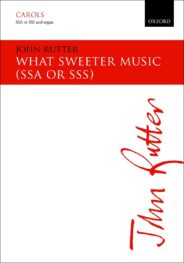 For many people, the celebration of the Advent-Christmas-Epiphany season begins as they wind their way through St. Olaf College’s buildings during the first weekend of December to attend the annual St. Olaf Christmas Festival.

First held in 1912, the St. Olaf Christmas Festival is one of the oldest musical celebrations of Christmas in the United States. Led by five conductors, it features more than 500 student musicians who are members of the college’s world-renowned choirs and orchestra.

The festival features a rich repertoire of classic Advent and Christmas compositions, familiar carols, hymns from around the world, and contemporary pieces from a diverse range of composers and cultures, offering music that both celebrates the Norwegian American history of the college while also highlighting beautiful works from around the globe. Works by many OUP composers including John Gardiner, John Rutter, Will Todd and Mack Wilberg have been performed over the years. The festival traditionally closes with students singing the hymn Beautiful Savior.

The founder of St. Olaf College’s music department, F. Melius Christiansen, created the St. Olaf Christmas Festival in 1912 as a Christmas program designed for the college community to celebrate the end of the semester. Over the years the program has evolved into a multi-day festival, with four performances spanning the first weekend in December. Each year, the St. Olaf Christmas Festival features a different theme, brought to life through a stunning set designed by St. Olaf faculty member Christie Hawkins, that aims to provide a message of faith, hope, and unity through music. In 2017 the theme was “Ris’n With Healing in His Wings.” This year it will be “Good News of Great Joy.”

The festival is regularly broadcast across the United States on public television and radio, and has been featured nationally in publications such as TV Guide, Entertainment Weekly, the Wall Street Journal, and the Los Angeles Times. Last year, the American Choral Directors Association invited St. Olaf to recreate the Christmas Festival for its 2017 National Conference at Orchestra Hall in March — a performance that brought nearly 5,000 conductors and singers from throughout the international choral community to their feet in resounding applause.

Conveying the spirit of the St. Olaf Christmas Festival in real time to an audience around the world is a significant undertaking — one that requires 10 HD cameras throughout the performance space, each individually controlled from high-tech video studios on campus; an Emmy Award–winning director/producer team; and 17 skilled broadcast technicians, including 11 current St. Olaf students and three alumni who are dedicated to sharing St. Olaf’s special tradition with national and international audiences.
“Our goal is to make viewers feel like they have the best seat in the house,” said St. Olaf Director of Broadcast Media Services Jeffrey O’Donnell, a 2002 graduate of the college who oversees the production of the live stream.

Johnny Goodson is a St. Olaf College junior from St. Paul, Minnesota, who is studying political science and media studies. He is an award-winning photographer who has studied abroad twice: first in Iceland, where he studied the media and its role in portraying global warming, and then in Ecuador, where he studied social and political transformation. Back on campus, he is the director of photography and marketing manager for the school newspaper, and he works for the college’s Admissions Office and Marketing and Communications Office. When he is not studying, traveling, or working, he is playing with the St. Olaf Men's Ultimate Frisbee team.