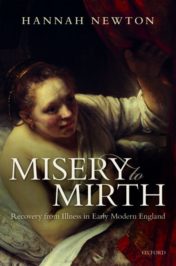 Misery to Mirth: Recovery from Illness in Early Modern England

Horrible histories are not just for young readers: adult historians also seem to have a penchant for painful tales of disaster and distress. This is especially apparent in the realm of medical history, where it has been said that before the birth of modern pharmaceutics the complete recovery of health was so rare that it barely existed as a concept.

A foray into the diaries and letters of early modern patients and their families reveals a happier history, however. Scattered amidst heartrending accounts of suffering and death, are joyful recoveries. In 1652, 11-year-old Martha Hatfield from Yorkshire was diagnosed with “Spleen-wind”, a disease characterised by “violent vomiting” and “rigid convulsions.” For nine months, her family was “continually under sadnesse, and their sleep broken;” they longed for God to “ease…her pain, [so] that [their] eares…might not be filled with such dolefull cries.”

One December evening, Martha suddenly felt strength returning to her body. She “rejoyced…with laughing” and “clasping her armes about her [mother’s] neck” in an embrace. The next morning, Martha “took some food without spilling,” and told her parents she’d had “a very good night”, not waking till 7 o’clock. Later that day, her older sister Hannah, who had been “very tender of her” during her illness, “took her up, and set her upon her feet, and she stood by herself without holding, which she had not done for three quarters of a year.” Over the following weeks, Martha “encreased in strength” beyond “all expectation,” and finally announced, “me is pretty well, I praise God…I am neither sick, nor have any pain.” A day of thanksgiving was arranged to celebrate Martha’s recovery. One of the guests recalled that the sight of Martha coming “forth into the Hall to…welcome us…was wonderfull in our eyes, so that our hearts did rejoyce with a kind of trembling.”

Martha’s story inspired my interest in the history of recovery not only by revealing that this outcome of illness was thought to be possible in early modern England, but by showing that descriptions of getting better have the potential to shine light into practically every corner of life in the past. In times of health, people were often too busy to remark on such things as breakfast routines and bodily sensation; in severe sickness, they were usually too unwell to be able to do so. But, the transformation from sickness to health propelled all the normally unnoticed facets of human existence to the forefront of people’s minds and personal writings. What an exciting prospect for the social historian!

For patients like Martha, recovery was a “happie motion” from anguish to elation, a trajectory marked and measured by a number of key milestones, such as sleeping through the night, eating solid foods, and standing unaided. At the heart of this experience was contrast. Robert Harris, a clergyman from Oxfordshire, described getting better as a transformation from “sicknesse to health…from sadnesse to mirth, from paine to ease, from prison to libertie, from death to life.” Patients enjoyed the blissful ease of abated pain, and cherished the freedom and sociability that came after a spell in the “lonely prison” of the sickchamber. They took pleasure in being able to carry out simple actions, which prior to illness would have generated no comment. Claver Morris, a Dorset doctor, recorded that after his fever in 1720, “I got up…and put on everything excepting my shoose, & completely dress’d myself in 2 minutes, by my wife[’]s watch!” Recovery was also a deeply spiritual experience, since it was believed to be ordained by God. Ultimately, the clue to the experience of recovery lies in the word itself: the verb “recover” means to re-possess. Patients re-possessed not just their physical faculties and ease, but all the other things they loved about life of which they had been deprived during sickness, such as visiting friends and strolling in the fields.

Relatives and friends usually shared the feelings of patients, undergoing a transition from agony to ecstasy. Known as “fellow-feeling,” this sharing of experience was physical as well as emotional, since relatives often claimed to share the patient’s pain during illness, and “sweet ease” upon recovery. Modern neuroscientists wouldn’t be surprised—functional neuroimaging studies show that the “pain areas” of our brains “light up” when we see someone else in pain. The ultimate form of fellow-feeling was when the patient’s recovery helped cure a sick relative. Anthony Walker (c.1622-92) from Essex recorded that when both he and his wife were unwell, “I recovered first, and when I could leave my Bed, and creep into her Chamber, the sight of me was like Life from the Dead…the joy so revived her Spirits, it helped to cure her.” Such accounts testify to the deep love between relatives in early modern England, challenging the traditional assumption that family bonds were weak at this time. Indeed, even strained or difficult relationships might improve as a result of the “close shave” with death. The naval official Samuel Pepys, who was frequently unfaithful to his wife Elizabeth, found that the “great terror” of realising she might die during a sudden illness in 1663 proved “a great tryall of my true love and passion for her.”

Although recovery was mainly a joyful occasion, there could be a gloomier side. Getting better sometimes take ages, and of course, not everyone made a full recovery. Many families were “tremblingly afraid” of relapse, and worried that the smallest action—even combing one’s hair—could rekindle sickness. For those who longed for heaven, survival could even be a disappointment. Occasionally, patients wished their illness could have continued longer, so as to excuse them from certain duties. The usually devout London woodturner Nehemiah Wallington (1598–1658) confessed that after an acute sickness in 1652, “I could be content to have bin longer sicke that it might have exsempted me from the house of God.”

Despite these downsides, the overwhelming impression is that recovery was the cause of great jubilation for patients and their families. I hope this finding will rebalance and brighten our overall perception of early modern health, thereby encouraging what the emotions scholar Darrin McMahon has called a “positive turn” in the discipline of history at large.

Featured image credit: Model sickchamber: The young patient is feeling better, and sits up to take her first meal. Courtesy of Hannah Newton, with her thanks to Kathryn and John Jitan for constructing the house.

Hannah Newton is a historian of early modern medicine, emotion, and childhood at the University of Reading. She is the author of The Sick Child in Early Modern England, 1580-1720, which won the European Association for the History of Medicine and Health Book Prize, and Misery to Mirth: Recovery from Illness in Early Modern England.

How face masks can help us understand the world