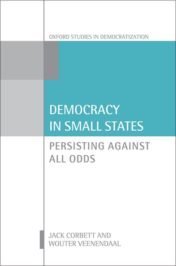 Democracy in the twenty-first century appears to have reached a fork in the road. On the one hand, over recent decades we have witnessed an explosion in the popularity of democratic norms and values around the globe to the extent that all but two countries label themselves as democracies, which if nothing else indicates how dominant this norm has become. On the other hand, particularly in those states where it is the long-established mode of political decision-making, citizens appear to be deeply disaffected with how democracy is practised. Even putting the election of Donald Trump and the recent Brexit referendum to one side, the long-term trend across Europe and America sees voter turnout declining, political parties struggling to retain members, and professional politicians increasingly despised or deemed untrustworthy. Outside these regions, in new or transitioning democracies, democratization scholars fear that progress has stalled, and that in the absence of strong structural bulwarks against authoritarian rule the triumphant march of democratization may have halted.

The tendency for politics to become dominated by the personalities of its leaders rather than ideology or policy programme is a key theme in this discussion. Most scholars argue it is a rising feature of political life that produces negative effects (see Poguntke & Webb 2005; McAllister 2007; Balmas et al. 2014). In particular, personalization is assumed to negatively affect political representation, because the limited relevance of political ideologies and platforms makes politicians less accountable to their voters. In this view, democracy has arrived at a significant fork in the road. And, worryingly, we don’t appear to know which way to go.

We have been fascinated by these themes because we study very small states (they have population of less than 1 million). As our forthcoming book Democracy in Small States: Persisting Against All Odds shows, personalism is and always has been ubiquitous in societies where citizens and politicians meet and engage with each other on a day-to-day basis. As a result, if personalization is global trend then we have a lot to learn about its effects, negative or otherwise, by studying the way politics works in micro cases. In particular, because small states are, statistically speaking, much more likely to be democratic than large states, personalisation may have unanticipated benefits for the resilience of democratic governance.

To explain this resilience, one of the questions we sought to answer in the book is how does domestic politics actually work in small states? And, having established this, does it conform to the negative depiction of personalisation or does the statistical correlation between country size and democratization point to hidden benefits? We studied 39 small states with populations of less than 1 million to answer these questions, conducting over 250 interviews with elite actors in the process. Despite the incredible diversity of these states (they come from five world regions and vary in terms of all the standard variables political scientists use to compare democracies, including levels of economic growth, colonial legacy, institutional design, party system etc.), we found that the practice of politics is remarkably similar. Key characteristics include:

Based on these similarities, we argue that hyper-personal politics has both the democracy-stimulating and repressive characteristics. For example, the familiarity between citizens and politicians is often regarded as democracy-enhancing, as it creates better opportunities for political representation and responsiveness. In addition, this closeness can foster political awareness, efficacy, and participation among citizens because political decisions often have a direct impact on their personal lives. Moreover, the close connections between citizens and politicians provide a formidable obstacle to executive domination, as their extensive social connections prevent politicians from resorting to full-blown oppression or violence.

But, it is clear that personalism simultaneously presents obstacles. The relative absence of ideology and the focus on political individuals undermines substantive representation. Patron–client linkages create social and economic dependency and unequal access to public resources and strong polarization and personality clashes can breed political instability and turmoil. Moreover, the opportunities for political leaders to accumulate untrammeled powers without the customary ‘checks and balances’ carries the risk of executive domination or dictatorial politics.

Hyper-personalism, it seems, provides mixed blessings for democratic governance, at least in small states. Certainly, not all of the six characteristics we identify are relevant for large states; the benefits of smallness both exacerbate and offset the consequences of personalism. In which case, the hyper-personal politics of small states might prove to be a better outcome than the combination of limited ideology, polarization, and leader dominance increasingly common to large and wealthy western democracies. Either way, these extreme cases highlight that hyper-personal democracy is both possible and yet very different to the experience of North America and much of Europe. The lesson is that rather than personalization precipitating a crisis of democracy, it presents as a crisis for a particular type of democratic politics common to a handful of large and rich states.

Jack Corbett is Professor of Politics at the University of Southampton.