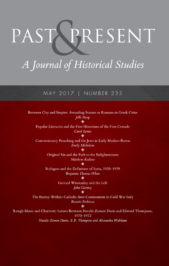 Founded in 1952, Past & Present is widely acknowledged to be the liveliest and most stimulating historical journal in the English-speaking world. The journal offers:

On 9 November 1918 in central Berlin, Philipp Scheidemann, a leading moderate Social Democrat, and Karl Liebknecht, an antimilitaristic renegade who was soon to co-found the Communist Party, announced the end of the German Empire and the beginning of a new political era. Both tried to give direction to a revolution that had begun as a protest movement against the war and the attempts by some officers to continue fighting in the face of defeat. However, both politicians’ speeches attest to the difficult heritage which the revolution bequeathed to Social Democrats and Communists. From a balcony of the Reichstag, Scheidemann hailed a resounding victory for the German people, while also admonishing them to maintain “quiet, order, and safety” and respect the “ordinances” and “proclamations” issued by the new authorities. Such statements came back to haunt his party, for it has often been faulted for containing popular unrest rather than marshalling it for social transformation. Liebknecht confidently proclaimed “the new socialist freedom of workers and soldiers”, which later earned him a place among the German Democratic Republic’s venerated ancestors. Yet, the religious language in which he evoked the “ghosts” of countless victims of total war and proletarian struggle marching past the Berlin Palace always sat oddly with a system based on “scientific” Marxism-Leninism.

The German Revolution of 1918-19 has never been easy to identify with, and its hundredth anniversary once again throws this difficulty into sharp relief. The balance has lately shifted toward acknowledging moderate revolutionaries’ achievements, namely that they ended the war, introduced universal suffrage at all levels, and built the foundations of the welfare state. While it is salutary in principle to appreciate Germany’s often forgotten democratic history, there is a price to pay for downplaying the complexity of the transition from wartime to postwar society in favour of a political narrative for our times. This transition was replete with spontaneous acts and idiosyncratic utterances. Ordinary people played cards in the workplace and started political arguments on the tram. They marched into noble estates to demand support, churches smoking cigarettes and waving red flags, and elementary schoolrooms to remove pictures of the Prussian kings. All this reflected a quest for subjective liberation after years of military or quasi-military discipline that does not always lend itself to retrospective identification. What are we to make of workers’ and soldiers’ councillors who drove around in commandeered cars for pleasure, arrested a condescending lawyer without any legal grounds, or defended children against corporal punishment by punching their female teacher?

This multi-faceted quest for freedom and dignity posed a problem for the left parties of the time because it did not fit into their respective ideological frames. Social Democrats expressed disappointment with a widespread lack of inner discipline, of morally governed selfhood. Communists bemoaned the fact that “proletarians’ will to independent action” had been worn down in the trenches, although they continued to believe in a second revolution. Independent Social Democrats, in an uneasy position between moderates and radicals, complained either that the German people were devoid of the energy of their Romanic or Slavonic counterparts, or that they possessed the energy but lacked strong leadership. In the winter and spring of 1919, coup attempts, short-lived council republics, and mass strikes followed in rapid succession. Meanwhile, in tranquil Weimar, Social Democrats were busy drafting the Republic’s constitution together with political Catholics and left liberals. At the time of its first anniversary, no party felt able to own the revolution, instead looking back at a mere “elementary collapse”. Radical workers, too, questioned how much had really changed. “Didn’t we build the railway so we could ride on it?” asked one miner in the Ruhr area, “yet, at best we get to travel third-class, mostly fourth-class, while the fat cats are sitting back on cushions in first or second class.”

Against the backdrop of a multi-faceted quest for subjective liberation, a revolutionary subject was keenly sought after but frustratingly evanescent. Hence, the German Revolution of 1918-19 lacked a clear narrative and was soon told as a story of failure. It is doubtful whether its protagonists can serve as models for today’s democratic politics. But the popular irreverence, exuberance, and urge for a better life merit our curiosity.

Moritz Föllmer is an Associate Professor of Modern History at the University of Amsterdam. He has widely published on Weimar and Nazi Germany as well as the history of modern subjectivity. He is the author of  the article ‘The Unscripted Revolution: Male Subjectivities in Germany, 1918/19’,  published in Past & Present.

The dividing line between German culture and Nazi culture