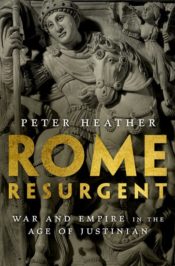 Rome Resurgent: War and Empire in the Age of Justinian

Between the fall of the western Roman Empire in the fifth century and the collapse of the east in the seventh, the remarkable era of the Emperor Justinian (527 – 568) dominated the Mediterranean region. Famous for his conquests in Italy and North Africa and for the creation of stunning monuments such as the Hagia Sophia, his reign was also marked by global religious conflict within the Christian world.

When writing about the Justinian era, historian Peter Heather chooses to use both Greek and Latin terminology as a way to bring Justinian’s legacy to life. We’ve listed out some of the terms that help detail the political and martial history of Emperor Justinian.

Nika— win or conquer (Greek): The empire that Justinian inherited in 527 AD began as Constantine’s dream in 312 AD. Constantine was advised in a dream, on the eve of battle, to mark the heavenly sign of God on the shields of his soldiers, and they went on to score a resounding victory. Thanks to Constantine’s dream, nika became the catchphrase of Rome’s armies.

Civilitas— civilization (Latin): The Roman imperial state claimed to be a superior form of political organization—not just superior to existing governments, but superior to any governments that might ever exist. Combining classical Greek philosophy and imperialism, the Romans placed heated importance on civilitas, civilization, as it signified an order of social organization that allowed human beings to become the fully rational beings their divine Creator wished them to be.

Nomos empsychos—law incarnate (Greek): From the late third century onwards, Roman emperors dominated lawmaking in the Roman world and were themselves customarily viewed as law incarnate. They could make (and sometimes break) laws as they wished, as long as they could present what they were doing as supportive of the ideals of rational civilization.

Bucellarii—personal soldiers (Latin): By the time of Justinian, field army generals all seemed to have substantial forces of officers and soldiers who were recruited by them personally and tended to follow their generals on campaigns even to far-flung corners of the Mediterranean. Sixth century bucellarii swore an allegiance not only to their general but to their emperor as well and were often supported in part by state funds.

Denarii—silver coins which were used to pay soldiers (Latin): The third century was marked by financial upheaval in Rome, particularly problems regarding military pay. Progressively, Roman imperial administrators debased the denarii, cutting full-value silver coins with base metals to generate the need amount of money to pay soldiers. It took about a month for everyone to realize that the new coins were worth less, though, by which time many of the soldiers would have spent their pay.

Silentarius—usher (Latin): The standard translation of silentarius, usher, gets nowhere near its importance. A long-serving palace insider, the silentarius Anastasius was voted for by Empress Augusta to be the next emperor in 491 AD. He fulfilled the public’s major requirements: he was orthodox, and he was Roman.

Henotikon—act of union (Greek): With the Eastern Church ever more bitterly divided, Byzantine Emperor Zeno drew up a peacekeeping initiative that successfully restored peace to the Eastern Church by stating that the faith had been satisfactorily defined once and for all in the fourth century at the Councils of Nicaea (325) and Constantinople (382).

Auxilia…divino—by Divine help (Latin): Around 500 AD, Theoderic the Great wrote a famous letter to Emperor Anastasius, claiming that he, Theoderic, “by Divine help learned in Your Republic the art of governing Romans with equity.” This letter is often cited to show barbarian deference to Roman ideology. Read as a whole, however, Theoderic asserted that his ability to govern Italy as a fully-fledged Roman ruler was not the product of observation and attention to Roman rule, but divine intervention.

Peter Heather is Professor of Medieval History at King's College London, and author of The Fall of the Roman Empire, Empires and Barbarians, The Restoration of Rome, and Rome Resurgent.

Madeline Woda is a marketing intern at Oxford University Press.