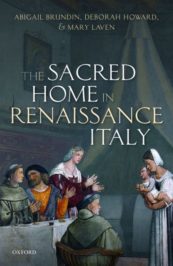 The Sacred Home in Renaissance Italy

Two summers ago, I was holidaying in Central Italy with my family. We’d rented a house in a beautiful spot, a few miles outside a small cathedral town. One night, we were shaken awake by an invisible force. My first, rash impulse was to stay put: I’d experienced earthquakes before, in Venice and even in Cambridge; they were a talking point, nothing more. It was only in the morning, when we started to receive messages from concerned friends and family back home, that we realised the extent of the destruction that had hit the region.

In that situation, a lot of things go through your mind—some predictable, others less so. The image I couldn’t get out of my head was of a sixteenth-century family, neatly attired, mother, father, and four children, kneeling in prayer on the first floor of their home as their town collapses around them. The painting, roughly executed on wooden board and bearing the name ‘VIADANA’, was an ex-voto: a gift presented by the family at the shrine of St. Nicholas of Tolentino to thank their local saint for saving them from an earthquake. They—like us—were the lucky ones.

An earthquake brings down walls and exposes hidden interiors. The image of the Viadana family is an invaluable historical source since it allows us to see something we cannot usually see: the devotional life of the Renaissance home. Domestic religion is an elusive topic, poorly recorded in official archives and often ignored in the writings of priests and theologians. And yet, for ordinary lay people, Christ, the Virgin Mary, and saints came closest in moments of crisis experienced within the household.

Renaissance Italians had many ways of warding off danger. They would hang strings of coral above their beds or place Agnus Dei—small pendants decorated with the Lamb of God and containing fragments of wax from the Easter candle burned at St Peter’s in Rome—in their infants’ cribs. When families in financial difficulty were reduced to seeking loans from charitable pawn banks, run by the Franciscans, they often left as security a bundle of trinkets, tied up in an old handkerchief: a typical assemblage of items might include a little cross, a coral rosary, a charm shaped like a crescent moon, and a wolf’s tooth. These were objects that ignored the formal boundaries between sacred and profane and which worked together to keep their owners safe.

From crossing oneself at the threshold of the home to sprinkling holy water by the bedside, domestic devotional practices were profoundly protective. Images of the Madonna, often positioned above a door or by the bed, were not only objects of veneration; whether or not children and their parents remembered to hail the Virgin as they passed by, she was always there, looking out for them. Religious books, which we tend to study for their content rather than their form, were often most powerful as material objects, kept close to the body at times of sickness or danger. 16th-century publishers were aware of this material function of texts and printed prayers against ‘thunder, earthquakes and pestilence’ on tiny scraps of paper, which were designed to be folded up and worn in a pouch hanging from a girdle.

It’s not often that personal experiences resonate so closely with one’s research. But, on that August night in 2016, my glimpse of a timeless terror brought home to me a matrix of Renaissance objects and practices. We have tended to think of this period as one of increasing worldliness, when classicism and consumerism dissipated a ‘medieval’ piety. But spiritual concerns ran into every capillary of daily life and every stage of the life-cycle, in ways that we are only now beginning to understand.

Mary Laven is Professor of Early Modern History at the University of Cambridge. From 2013 to 2017, with Abigail Brundin and Deborah Howard, she co-directed the ERC Synergy project, ‘Domestic Devotions: The Place of Piety in the Renaissance Italian Home’. As part of the project, in 2017, she co-curated ‘Madonnas & Miracles: The Holy Home in Renaissance Italy’, at the Fitzwilliam Museum, Cambridge. She is the co-author of The Sacred Home in Renaissance Italy. She is also the author of Virgins of Venice: Enclosed Lives and Broken Vows in the Italian Renaissance Convent (2002) and Mission to China: Matteo Ricci and the Jesuit Encounter with the East (2011).