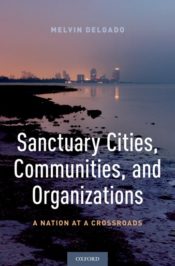 Born and raised in the South, Bronx by Puerto Rican parents, Melvin Delgado’s research and work has centered on the strengths of communities of color in urban areas. He’s written extensively on social work with Latinos, social justice and youth practice, and most recently the sanctuary movement. We asked Dr. Delgado to answer some of our questions about social work with the Latinx community to commemorate National Hispanic Heritage Month. Each year, from September 15th to October 15th, Americans celebrate the histories, cultures, and contributions of Americans whose families originated in Mexico, Central American, South America, and Spain.

Earlier this month we caught up with Dr. Delgado to discuss some of the challenges and opportunities that Hispanic Americans are facing today.

Talk a little bit about the diversity of the “Latinx community” (which of course is anything but monolithic, as the term may imply)—what do you think is the most commonly misunderstood aspect of these communities?

The Latinx community is highly diverse and the increase in diversity is ever constant. The majority of Latinxs are Mexican/Mexican-Americans, followed by Puerto Ricans, Dominicans, Cubans, and other recently arrived groups from Latin America. Citizenship status, a key issue in today’s political climate, can further divide our community. The increase in outgroup marriage (co-ethnic/racial) has only added to this diversity. When we introduce geographical factors (urban, suburban, rural), it makes generalizations even more arduous.

This nation promises to become even more diverse in the next few decades. In 2015, for example, the U.S. was the second-largest Spanish-speaking country in the world with 41 million native speakers and 12 million bilinguals, behind Mexico and ahead of Colombia and Spain.  However, if projected demographic increases continue unabated until 2050, the U.S. will become the world’s largest Spanish speaking country, with an estimated 30% of the nation having Spanish as part of the languages they speak, and a significant step closer to making this country bilingual in English and Spanish, and bringing about a major transformation to the national culture and identity.

In your experience and work what do you consider to be the most valuable cultural assets Latinos living in the United States possess?

That is a tough question. However, it is the right question because in seeking to answer it we no longer focus on deficits and turn to assets. I believe that the family , in its broadest definition, is at the center of cultural assets. Fortunately, important research and scholarship is taking place across the country on this asset.

What do you think are the most significant challenges facing Latinxs and their communities today?

There are many challenges depending upon level of formal education and English language competencies. We also face issues of racism because of our backgrounds (Indian, Spain, and African), bringing skin color into the mix, so to speak. The subject of the unauthorized, too, promises to place Latinx’s in the glare of a spotlight. For those who have been separated because of ICE, the challenge of family reunification takes on added meaning. Deportations, for example, have started to increase in numbers, and for every deportation there is a family and community impact.

What kind of work is currently being done in sanctuary cities and communities—where did this idea originate from and what work do feel needs to be done in the coming years?

The sanctuary world is broad and goes beyond what we typically think of when discussing sanctuary sites, and even more so when it involves “unofficial” designations. It is an expanding universe and full of surprises.

The sanctuary movement consists of two movements—one with a religious purpose with its origins in Tucson in the 1980s. The sanctuary city movement, however, is more of a modern day social phenomenon over the past decade, with an accelerated pace of development over the past two years since President’s Trump election.

I believe that the family , in its broadest definition, is at the center of cultural assets.

Talk to me more about the surprises you’ve encountered in the sanctuary world—I think most people are only familiar with the more political iteration.

I am always so surprised by the vastness of this movement and the wide range of people and organizations involved in seeking social justice for those who are unauthorized. A wide range of professionals are playing active roles. Social workers are acting as social brokers and advocates; lawyers are provided pro bono legal advice and conducting workshops on legal rights; librarians have played an active role in making libraries sanctuaries for the gathering of information, holding meetings, and for the distribution of materials on immigration; “ordinary” residents have lent their talents, food, and money, to aid those residing in sanctuaries. The saying “it takes a village” is equally applicable in discussing sanctuary communities and organizations.

What do you recommend individuals—both social workers, academics, and the general citizenry—do to support the sanctuary movement?

I see the sanctuary city movement encompassing all types of organizations, professionals, and people, making it more encompassing than a narrow definition of an “official” designation. Elected officials and professionals have a role to play within their own sphere of influence. However, I also see how local residents can move this social change/social justice agenda forward by contributing their time, expertise, and financial contributions.

The work being done in California stands out as a model whereby local residents have opened their homes to protect those who have been targeted for deportations. Houses of worship have benefitted from residents providing carpentry, plumbing, etc., to outfit local houses of worship to house those who are undocumented. Houses of worship rarely have the capacity to actually house people. Professionals have provided workshops on civil rights and made needed referrals when needed. In essence, I can go on and on about the different ways that professionals and residents and work together to move forward this civil rights agenda. That is exciting!

National Hispanic Heritage Month dates back to 1968 and aims to recognize the contributions made by Hispanic and Latino Americans in the United States—what kind of value or contribution to see these type of awareness-promoting campaigns make for the lives of Hispanics and Latinos in this country?

In essence, we are a presence and for some of us, such as Mexicans, we have been in this country for centuries. We, as noted earlier, are a young community and will continue to expand demographically. Our future is this nation’s future!

You also do a lot of work in social justice advocacy in youth communities—what kind of promising practices do you see in this area, particularly in work with Latinx and Hispanic youths?

I believe that we must embrace an assets/resiliency model to identify and work with strengths. This does not mean that we do not have problems and challenges. However, we must start with these strengths and develop interventions that systematically build upon them and do so in a highly participatory manner.

How do you promote a positive view of urban youth, a population that is so often discussed in terms of a deficit perspective?

We must systematically go about identifying what these assets are. How are they developed and sustained? How and why have they managed to preserver despite of tremendous odds against them. Each of these questions necessitate a line of research inquiry and corresponding scholarship. Nevertheless, youth must be front and center in helping use answer these questions because in the long-run, they must own the interventions that will follow.

Melvin Delgado, PhD, is Professor of Social Work at Boston University School of Social Work. He is the former Chair of Macro Practice. Dr. Delgado has 40 years of practice, research, and scholarship focused on urban population groups, with the Latino community being a specific focus. Born and raised in New York City (South Bronx), he is bilingual and bicultural, and has focused his professional and academic career on developing urban-based outreach, research, and service delivery models stressing participatory democratic principles, and tapping cultural strengths and community assets. Dr. Delgado has addressed a variety of social issues and needs, and published numerous articles and 30 books on urban community practice topics. He is currently the Series Editor of Social Justice and Youth Community Practice, Oxford University Press.

He is the author of Social Work with Latinos and the newly released Sanctuary Cities, Communities, and Organizations. He is also the editor of the Social Justice and Youth Community Practice series.

Immigration, the US Census, and political power