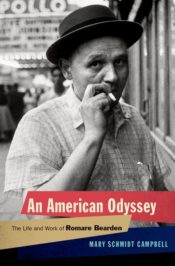 An American Odyssey: The Life and Work of Romare Bearden

On his way to becoming a successful artist, Romare Bearden was a promising varsity baseball player at Boston University, who occasionally played for The Boston Tigers, a Negro League team. Once during his student years, major league talent scouters tried to persuade him to try out for a professional team. He turned down their offer. Playing professional ball would require him to pass for white. A staunch race man in the 1930s, in a pre-Jackie Robinson world, the future artist was not willing to repudiate his blackness in order to play pro-ball.

Bearden went on to become a great 20th century artist. A hallmark of his art was his capacity to anchor himself firmly in his own identity as a black citizen and confidently claim his place in a tradition of western European modernism. Working primarily with the medium of collage, he created work that joined a modern lineage of abstract painting that begins with Pablo Picasso, George Braque, and Henri Matisse, and continued with the World War I work of Hannah Hoch and Kurt Schwitters. At the same time, in his stark and poetic representation of black culture, he remains a harbinger of the 21st century, a major influence on generations of black artists who have constructed and assembled work out of the multiple cultural inheritances they feel free to claim.

I thought about Bearden’s baseball choice and his career as an artist, when the comedian and talk show host, Trevor Noah, quipped that the French soccer team’s 2018 World Cup Success was an African success. Indeed, as reported in the 14 July 2018 edition of The Baltimore Sun, the French team’s players come from families that “recently immigrated to France from places like Zaire, Cameroon, Morocco, Angola, Congo or Algeria.” They went on to report that “Forward Antoine Griezmann, the team’s leading scorer, is half-German and half-Portuguese. Defender Samuel Umtiti, who scored the goal that sent France to the final, was born in Cameroon. Teenage prodigy Kylian Mbappe is part Cameroonian, part Algerian.”

Noah’s comments set off a firestorm of French indignation. Officials of the French government argued vehemently and publicly that, by virtue of their citizenship, team members were French, not African. Noah responded by insisting that identity was not a matter of either or. Claiming African heritage was not the same as rejecting French identity. Quite the contrary, it was an expansion of their French identity and acknowledgment that contemporary identity can contain, in the words of the poet Kevin Young, “multiple inheritances.”

It was easy to consider this quarrel as typically French, since France is a country notoriously proprietary about its language and culture. But, no sooner had the French quarrel erupted, another cultural identity challenge became public, this one from the German soccer team. In the German case, German team officials and some German citizens sharply criticized a player of Turkish heritage for posing in a photograph with the President of Turkey. From the player’s point of view, his photo opportunity was an expression of his pride in his Turkish heritage. To the German officials, the photograph privileged his Turkish heritage over his German national citizenship. The player resigned the German team in anger.

Bearden’s collages, which burst onto the art world scene in the fall of 1964, made a compelling aesthetic argument for multiple cultural inheritances. He called his vision “the Prevalence of Ritual,” and it was first manifest in Projections, black and white photographic blow-ups of collages. The billboard size works, presented a world of black life and culture as Bearden remembered it, studied it, and experienced it by constructing scenes of Black life from an encyclopedic set of fragments of myriad artistic heritages. Bits and pieces of Benin sculptures merged with 17th century Dutch genre paintings to convey the multiple cultural heritages that Bearden claimed as his.

Collage, a medium Bearden explored thoroughly in the 20th century, is a medium that is even more relevant in the 21st century. Collage captures the incessant voyaging that has transformed and shaped the modern world. Hundreds of years of the transatlantic slave trade uprooted multitudes. The voyages of European explorers imposed colonialism in virtually every corner of the world. 20th century modernism is built on these cultural appropriations. In the post-colonial world, populations often took to whatever vessels they could find to cross national boundaries. Collage, with its implications of rupture and disruption, fracture and re-assembly capture the post-colonial voyaging as much as it captures the modernism that was one of the vital sources of Bearden’s mature artwork.

Modern soccer teams are much like Bearden’s collages. They claim a national identity constructed of many identities, each critical to the unified whole. Like Bearden’s collages, the 2018 French and German soccer players can claim their personal history and heritage; they can immerse themselves in the cultural practices of their memories and their families. But they can also claim the national identity, language, culture, and citizenship of the country they now claim and, in terms of national sports, lead to victory.

Mary Schmidt Campbell is President of Spelman College and Dean Emerita of the Tisch School of the Arts. She served as the vice chair of the President's Committee on the Arts and Humanities under former President Barack Obama.