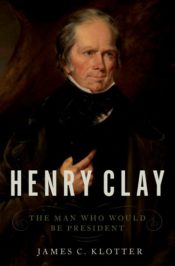 Henry Clay: The Man Who Would Be President

Henry Clay was not perfect. He could be harsh in his criticisms—he called Andrew Jackson “ignorant, passionate, hypocritical, corrupt, and easily swayed by the basest men” (Jackson, in turn, termed his enemy Clay “the basest, meanest scoundrel that ever disgraced the image of his god”). Clay made political mistakes, owned slaves, fought duels, had a reputation for gambling and drinking too much, and more. Perhaps some of those reasons were why he never became president. Three times he sought the office; three times he was defeated. Twice more he was runner-up for his party’s nomination.

But his success lies less in the races he ran than in the life he lived and his service to the nation. Clay succeeded as Speaker of the US House of Representatives, Secretary of State, leader of his party in the Senate, and as “The Great Compromiser.” But most of all, he was a political model for generations. In that capacity, his words speak to us still.

Clay on the need to compromise:

“Compromise is particularly appropriate among the members of a republic, as of one common family…. Let him who elevates himself above humanity, above its weaknesses, its infirmities, its wants, its necessities, say, if he pleases, I will never compromise, but let no one who is not above the frailties of our common nature disdain compromise.”

“Nothing human is perfect…. [Do not] reject the practicable in the idle pursuit after the unattainable. Let us imitate the illustrious example of the framers of the Constitution, and always remember that whatever springs from man partakes of his imperfections.”

“[Compromise] is a work of mutual concession…, a work in which, for the sake of peace and concord, one party abates his extreme demands in consideration of an abatement of extreme demands by either party…, a measure of mutual sacrifice.”

Clay on the legislative process:

“We cannot foresee and provide specifically for all contingencies. Man and his language are both imperfect.”

“What question is there in human affairs, so weak or so strong that it cannot be approached by argument and reason?”

“The majority should dismiss from their minds all vindictive feelings…. Nothing should be done from passion, nor in passion…. Repeal bad laws, but preserve good ones even if they have been passed by the late dominant party.”

“I coaxed, soothed, scorned, defied them [congressmen], by turns as I thought the best effect to be produced.”

Clay on the need to represent not your district or state, but your country:

“The Union is my country; the thirty States are my country.”

“We are the same people. We have the same country.”

Clay on the role of “Big Money” in elections:

“Prodigious effort, seconded by a vast expenditure of money, are making from Washington; and if we fail it will be because the power of corruption is superior to the power of truth.”

“A tariff is an affair of mutual concessions.”

Clay on the role of government:

“[The purpose of government is] to lift up the depressed, to heal the wounds, and cheer and encourage the unhappy man who sees in the past…nothing but ruin and embarrassment, and in the future nothing but gloom and despair.”

Clay on rights, truth, and the American way:

“If we surrender without a struggle to maintain our rights, we forfeit the respect of the world, and what is infinitely worse, of ourselves.”

“Has it ever been known that the cause of truth was hurt by enquiry and investigation?”

Clay and sacrifice in politics:

“I am as ready now to sacrifice every thing…to the rescue of our Country from the shocking and disgraceful misrule in Washington.”

“What are we—what is any man worth who is not ready to sacrifice himself for the benefit of his country when it is necessary?”

“I would rather be right than be president.”

James C. Klotter is Professor of History at Georgetown College and State Historian of Kentucky. The prize-winning author, coauthor, or editor of some eighteen books, he was the executive director of the Kentucky Historical Society for many years.