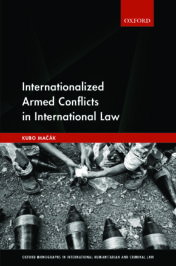 If someone was to make a ranking of the most controversial rules of international law, Article 1(4) of Additional Protocol I to the Geneva Conventions would very likely make the top 10. The Geneva Conventions themselves probably need little introduction; these four international treaties were adopted in the aftermath of World War II and now form the core of international humanitarian law (IHL). Each of the Conventions is designed to alleviate human suffering during wartime by protecting a distinct category of persons: civilians, prisoners of war, wounded and sick troops, and so on.

Although the net effect of the Conventions was indisputably positive, by the 1970s it had also become apparent that they had a number of gaps and imperfections. Accordingly, in 1974 the Swiss government convened in Geneva a large diplomatic conference whose purpose was to “reaffirm and develop” IHL as it had been codified in the Conventions. Around 700 delegates from a vast array of states attended the conference and, after nearly four years of deliberations, agreed on the text of the two Additional Protocols. However, that outcome was far from preordained.

In fact, one draft rule—the one that later became Article 1(4) of the first Protocol—became a major stumbling block for the delegates. Discussions around its proposed text unexpectedly took weeks to complete and at one point almost led to the collapse of the entire conference. Even after the conference was over and the Protocols were signed, this provision continued to divide the international community, so much so that the split it occasioned has defined IHL ever since. So what is it about and what role does this controversial rule play today?

Article 1(4): the root of the Great Schism

To explain the controversy behind Article 1(4), it is best to start with the legal effect the drafters intended it to have. In this sense, the rule provided for an unprecedented legal fiction: it put a certain type of armed conflicts occurring within one state’s territory on par with inter-state wars. These were the so-called “wars of national liberation,” or, in the more technical language of the provision, “armed conflicts in which peoples are fighting against colonial domination and alien occupation and against racist regimes in the exercise of their right of self-determination.”

Until the adoption of the Protocol, such situations had only been governed by the “elementary considerations of humanity” enshrined in Common Article 3 to the Geneva Conventions, a single provision dedicated to “armed conflict[s] not of an international character.” By contrast, once Article 1(4) became a part of the corpus of IHL, wars of national liberation were equated in law with international armed conflicts. In other words, as the Protocol entered into force, hundreds of additional rules laid down by the Conventions and the Protocol suddenly became applicable to such situations.

Although many states welcomed this development as a logical and morally desirable by-product of the decolonization process, others were far less convinced. In 1987, US President Ronald Reagan denounced the entire Protocol as “fundamentally and irreconcilably flawed,” in part precisely because its Article 1(4) had given “special status to ‘wars of national liberation,’ an ill-defined concept expressed in vague, subjective, politicized terminology.”

Although many states welcomed this development as a logical and morally desirable by-product of the decolonization process, others were far less convinced.

Ultimately, the strong opposition to the Protocol by the US and others prevented the achievement of its universal ratification, in contrast to the original four Conventions. Therefore, the rules established by the Protocol still do not apply as a matter of treaty law to a significant minority of states, which causes considerable practical difficulties in armed conflicts that involve a combination of contracting and non-contracting states. Professor Yoram Dinstein, the doyen of the field, has rightly labelled this persisting divide in the international community as a “Great Schism.”

Destined to become a dead letter?

The irony is that after stirring up so much controversy at the conference and having sown deep divisions that last until the present day, Article 1(4) itself has made very little impact in the real world. On reflection, perhaps this isn’t really that surprising. After all, which state would readily agree that it is on the wrong side of a fight against “colonial domination,” “alien occupation” or a “racist regime”?

And indeed, those states for whom the rule had reportedly been “tailor-made”—that is, “Portugal, Israel, and South Africa”—made sure not to ratify the Protocol at all (in the case of Israel) or at least to wait until their circumstances changed enough for the rule not to bite them anymore (Portugal ratified the Protocol after having relinquished control over its ex-colonies and South Africa did so after the end of apartheid). Basically for these reasons, George Aldrich, the former head of the US delegation to the 1974–77 diplomatic conference, argued in the 1990s that Article 1(4) was destined to become “a dead letter” that would never see application in practice.

Two decades later, as I was commencing my research on conflict internationalization, I had very little doubt that Aldrich’s prediction would hold true. Still, I felt I had to include wars of national liberation in the scope of the project. This was because conflicts falling within the remit of the provision would, at least in theory, transform from non-international armed conflicts to ones governed by the law of international armed conflict. In other words, situations such as those described in Article 1(4) and occurring in the territory of a contracting state to the Protocol form a distinct subcategory of internationalized armed conflicts. But would they ever become more than a theoretical possibility?

(To be continued in Part II)

Dr Kubo Mačák is a senior lecturer in law at the University of Exeter and the author of Internationalized Armed Conflicts in International Law, a new release from Oxford University Press.

The Geneva Conventions and the minimum standards of humanity