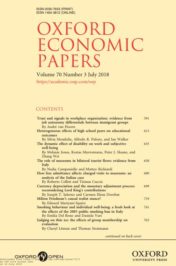 One of the most common arguments against contemporary capitalism is that it generates extreme inequalities. Few individuals – it is often said – earn huge earnings, while the rest of society has to struggle to make ends meet. But, who are the super-rich and why they are paid so much?

Observing the composition of top incomes reveals a striking novelty for what concerns the “who” question. In fact, while in the past, the large majority of individuals belonging to the richest segment of the population included rentiers or entrepreneurs, in the last few decades there has been a considerable increase in the number of “working super-rich” accessing the top income bracket, as shown by Alvaredo and colleagues. In Italy, for the richest 1% of the population, earnings (from employment and self-employment) accounted for the 46.4% of the total in 1980 while they accounted for 70.9% in 2008 and, similarly, among the 0.1% richest segment of the population, the share of earnings rose from 29.5% to 66.2% in the same period. Among the working super-rich, few selected professions are often at the top of the income parade: sportsmen, singers, artists, writers, CEOs.

The answer to the “why” question is instead much more challenging. There are currently at least three – not mutually exclusive – explanations. The first explanation hinges on the differentials in talent/productivity among individuals that, in some markets, can be magnified into huge differences in earnings. Rosen refers to markets in which consumers are able to identify who are the best performers, they prefer to be served by “the best”, and technology allows for joint consumption. Better performers can thus draw large audiences, for instance, in football stadiums, or via TV or selling their books or albums worldwide, with a cost of production largely independent of the size of the audience.

A second explanation, proposed by Adler, suggests that superstars might emerge among equally talented performers due to the positive network externalities of popularity. Actually, the appreciation of a particular performer (e.g. football player, singer, or artist) grows with the knowledge consumers have acquired about him/her through conversations with other people. In fact, as a performer’s popularity increases, it becomes easier to find other fans, because consumers are better off patronising the most popular star as long as others are not perceived as clearly superior.

As a third explanation, extraordinary earnings might be associated with the bargaining power exerted by superstars. For instance, managers and CEOs in large companies might be able to fix their own remuneration independent of productivity, exploiting asymmetric information with respect to shareholders, while players in team sports can achieve wage increases by threatening the club owner with acceptance of a better deal from another team relying upon professional agents in order to negotiate better deals with team’s owners, as suggested in the book by Blair.

Providing empirical support to these explanations is often complicated due to difficulty of finding appropriate data. Sport statistics represent an exceptional opportunity since “we know the name, face, and life history of every production worker and supervisor in the industry”, as noted by Kahn.

At least for what concerns football players, the interpretation of extraordinary earnings based only on very talented workers who “win and take all” seems to be largely incomplete. Investments in popularity and in the choice of the “right” agent seem to be equally – or even more –  remunerative than having good feet. Players seem to know this very well considering the time they spend on their social network accounts. Similarly, professional agents are gaining popularity becoming sometimes even more famous than the players they represent. With a few possible differences across sectors, these factors are likely to also explain the earnings of other super-rich such as actors, musicians, and virtually all workers in sectors characterised by a large audience. Whether or not this is fair remains an open dispute. What is less contentious is that these superstars arise in very special markets in which very few individuals play and the rest enjoy the performance. Not exactly competitive markets.

Vincenzo Carrieri is Associate Professor of Public Economics at the Department of Economics and Statistics, University of Salerno, Italy. His research interests are in Health Economics, Income Inequality and Applied Microeconometrics.

Francesco Principe is PhD candidate at the Department of Economics and Statistics, University of Salerno, Italy. His research interests lie in the field of Health Economics and Applied Microeconometrics, with a major focus on health inequalities, health policy evaluation, income inequalities and wage determination.

Michele Raitano is Associate Professor of Economic Policy at the Department of Economics and Law, “La Sapienza” University of Rome, Italy. His research interests include inequality, social mobility and welfare state policies.

They are the authors of “What makes you ‘super-rich’? New evidence from an analysis of football players’ wages” in Oxford Economic Papers.