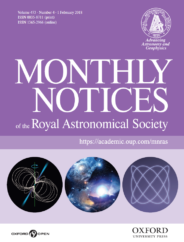 Spiral galaxies like the Milky Way and its neighbour, the Andromeda Galaxy, contain about 100 billion stars each, the light of which can be seen by eye. Also visible are small amounts of dust, typically enshrouding the sites of young star formations. What cannot be seen by the naked eye are the vast amounts of cold hydrogen gas and even larger reservoirs of dark matter. These elements of galaxy make-up are detectable only by radio telescopes.

Understanding the distribution of cold hydrogen gas and dark matter could be central to understanding the construction of galaxies across the Universe, including our own. For the past several years, I have led a team of scientists on a research project to understand these galactic elements. We have taken deep radio observations of nearly 100 nearby galaxies, using CSIRO’s Australia Telescope Compact Array (ATCA) and combining and analysing the data this radio interferometer produced. Cold hydrogen gas is detectable at a wavelength of 21 cm, and by tuning the ATCA’s sensitive receivers to this frequency, we were able to map the distribution of hydrogen gas in each galaxy, well beyond the flat plane of dust and stars known as stellar disks.

Using the ATCA radio interferometer in this way, we have been able to not only map the location and intensity of the hydrogen gas, but also the speed at which it travels to an extremely high accuracy. Detailed analysis of each galaxy has allowed us to determine its distance, size, shape, rotational velocity, and total mass. This research discovered a veritable zoo of galaxies, from regular to highly irregular shapes: thin and fluffy discs; some sprouting extensions; tidal tails; warped outer arms; and tiny companions.

The project is called LVHIS—pronounced ELVIS—which stands for Local Volume HI Survey. While the Milky Way and Andromeda Galaxy—together with about 100 small neighbours known as dwarf galaxies —make up the Local Group, the Local Volume (LV) encompasses around 1000 nearby galaxies out to a distance of 30 million light years. We chose to analyse galaxies already detected with CSIRO’s Parkes 64-m telescope (known as “The Dish”) in the HI Parkes All Sky Survey (HIPASS).  Using these pre-detected galaxies allowed us to map their hydrogen structure with 20 times greater accuracy, and to derive their rotation speeds, which are important for measuring dark matter content.

Most LVHIS galaxies live in two prominent galaxy groups, known as the Sculptor Group and the Centaurus A Group. Interactions in which these group members enter each others’ gravitational fields and collide are common, and the results of this gravitational dance are best seen in cold hydrogen gas, observable by our radio telescopes at a wavelength of 21cm.

Even larger hydrogen studies are now under way with CSIRO’s Australian Square Kilometre Array Pathfinder (ASKAP), a 36-antenna radio interferometer in Western Australia. This research forms part of the WALLABY project, led by myself and Lister Staveley-Smith. Early Science with an array of 12 to 16 ASKAP dishes, each equipped with brand-new Phased-Array Feeds delivering a field of view of 30 square degrees on the sky, is starting to provide similar maps to LVHIS, but for many more galaxies and a larger volumes of space.

On an even more ambitious scale, the full ASKAP HI All Sky Survey (WALLABY) is expected to get under way soon, and will detect over 500,000 galaxies and large numbers of star-less HI clouds. The latter are often tidal debris, i.e. gas removed from the outer disks of spiral galaxies by gravitational interactions between neighbours.

These innovative advances in astronomy technologies provide the potential for ever greater discoveries about the galaxies inhabiting our Universe.

Dr Bärbel S. Koribalski is a research scientist working on gas and dark matter in nearby galaxies at the Australia Telescope National Facility (ATNF), and CSIRO Astronomy and Space Science (CASS), in Sydney. Since receiving her PhD from the University of Bonn, Germany, she has explored the structure and kinematics of galaxies, as well as interactions between galaxies using radio interferometers around the world. She leads the Local Volume HI Survey (LVHIS) and co-leads the ASKAP HI All Sky Survey (WALLABY) project. A passionate athlete, she now competes regularly at masters championships around the world. For more from her research, follow @HIgalaxies on Twitter.

Dr Koribalski is the lead author of "The Local Volume H I Survey (LVHIS)," published in Monthly Notices of the Royal Astronomical Society.

Smashing black holes at the centre of the Milky Way