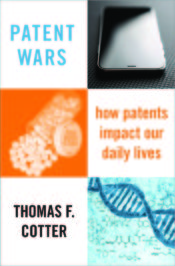 Patents—rights that governments grant to inventors for new inventions—pervade the modern world. The US alone grants about 300,000 of them annually, mostly for components of, or methods relating to, larger end products. Your smartphone, for example, contains thousands of patented features; but even many seemingly simpler items, such as cosmetics, often contain one or more. It’s no big surprise, then, that as patents have exploded in numbers and importance, they have begun to attract considerable public attention. Anyone reading the news over the past decade would have encountered stories on the patentability (or not) of human genes, business methods, and software; the impact of patents on the price of prescription drugs; the abuses attributed to “patent trolls” who buy up patents and, according to critics, profit from nuisance litigation; and, of course, the “smartphone wars” in which Apple, Samsung, and other players found themselves litigating in, at one point, ten different countries.

Most people are also aware that countries grant patents as a means to an end, namely to encourage investment in the creation, publication, and commercialization of new technologies from which the public ultimately benefits. Because invention is often expensive and uncertain, while copying is cheap, absent the exclusive rights that patents provide fewer inventors would invent, and society correspondingly would be worse off.

Or so the story goes, at any rate; but there’s also a competing story that focuses on social costs. Patents often are referred to as “monopolies,” after all, and sometimes (as in the case of new drugs for which there are no substitutes) the term fits. Monopoly in turn means that prices are higher than they would be under competition. Further, because every new invention necessarily builds on something that came before it, if patents are too plentiful or broad, they risk raising the price of creating new technologies, which in turn makes such creation itself less likely.

So do patents, on balance, generate a surplus of benefits over costs?

Of course, pretty much everything in life involves a tradeoff between costs and benefits; the question is whether any given tradeoff is worthwhile. So do patents, on balance, generate a surplus of benefits over costs? And if so, is that surplus as high as it could be, or should patent laws be reformed to make it greater?

Most economists believe that the answer to the first question is yes—that the world is a better place with patents than without them—but beyond that, consensus is hard to come by. Most observers believe, for example, that patents are crucial to innovation in industries such as pharmaceuticals. But the amounts drug companies actually spend on R&D, for which patents are said to compensate them, remains opaque; and while it’s better to pay a monopoly price than to do without a lifesaving drug, our choices might not be so constrained if we had better information. Similarly, one reason that firms in high-tech industries acquire patents is to have an arsenal in reserve, in case they wind up being sued themselves (the so-called patent arms race)—a practice that, on one view, seems socially wasteful. At the same time, though, venture capitalists often look to startups’ patent portfolios as evidence of hidden value, leaving the net impact of patents in the high-tech space a bit ambiguous.

After all these years, you might think we’d have a better idea of the conditions under which patents promote the public good. The good news is that the picture is, in general, improving, as economists conduct richer empirical studies of how the system works; their insights, though gradual and imperfect, can help nudge policymakers in the right direction. But it’s also important not to overstate one’s case: other research suggests that the policies governments have adopted over the decades with regard to patents may not be as central to the innovation landscape as those of us in the thick of it sometimes like to imagine.

Early in my career, I used to ridicule Chief Justice Burger’s assertion in a famous case that whether certain bacteria were patentable or not “may determine whether research efforts are accelerated by the hope of reward or slowed by want of incentives, but that is all.” If patents had only such a marginal impact on innovation, I wondered, why bother having a patent system in the first place? As the years have passed, however, I’ve come to see that maybe the chief was right—that, as Kevin Kelly writes, the technium evolves according to its own unique path and timetable. Perhaps the best the law can do is move it along a little faster or smoother than it otherwise might go. A rather humble mandate, perhaps; but at a time in which humility often seems to be in short supply, a bit refreshing for all that.

Thomas F. Cotter is the Briggs and Morgan Professor of Law at the University of Minnesota Law School. He is the author of Patent Wars: How Patents Impact Our Daily Lives, a new release from Oxford University Press.

Do we need artificial inventors?