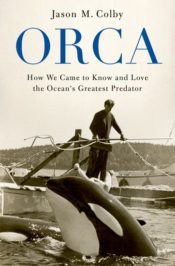 Orca: How We Came to Know and Love the Ocean's Greatest Predator

The names of these animals are overtly violent, but what do we actually know about the alleged “demons from hell”? This month, we want look at the facts about killer whales, and debunk the centuries-old mystery and fear surrounding orcas.

Gaius Plinius Secundus, better known as Pliny the Elder, was the first person to have recorded a description of killer whales. Based upon Pliny’s description of the creature, the orca seemed to have instilled fear into him. Penned in his encyclopedic Naturalis Historia, Pliny painted orcas as “an enormous mass of flesh armed with teeth,” as well as “and with its teeth tears its young, or else attacks the [balaena] females which have just brought forth, and, indeed, while they are still pregnant.” Moreover, Pliny describes the orca “as though the sea were infuriate against itself.” Pliny originally bore witness to Orcinus orca in 50 CE, when an orca had been drawn in by a ship from Gaul to the harbor of Ostia, Rome’s port city. The Romans, no stranger to watching animals die, attacked the killer whale until it succumbed, though not without sinking at least one Roman vessel beforehand. The earliest recordings of orcas are rooted in violent depiction, stemming centuries of fear from human observers. However, these “killer whales” are unlikely to attack humans.

The diet of an orca specifically revolves around the ecosystem of a given pod, but the primary and typical diet of an orca consists of salmon, seals, porpoises, sea lions, and minke whales. Other regional pods prey on squids, octopi, otters, rays, dolphins, sharks, baleen whales, as well as turtles, seabirds, and even penguins. The orca hunting strategy is incredibly complex, given the size, high intelligence, and sociability of pods, allowing orcas to dominate the top of the marine food chain.

What is a cetacean? Cetacea is an order of marine animals that comprises whales, dolphins, and porpoises. Cetaceans have hairless bodies, no hind limbs, a horizontal tail fin, and a blowhole on top of their head for breathing. While cetaceans live in the water, they are also mammals, and thereby must resurface for air. Orcas were also given the categorization in 1758 of Delphinus orca, literally translating to “demon dolphin.” Of the more than seventy species of toothed whales, they are second in size only to the sperm whale—full-grown males can reach near thirty feet in length and almost twenty thousand pounds.

The anatomy of an orca is incredibly complex and sophisticated. Orcas are equipped with strong underwater eyesight, but moreover, orcas are acoustic. By manipulating air in nasal passages below their blowholes, they generate a wide range of sound waves. Orcas have biosonar, providing a natural sonar system common amongst cetaceans. Their biosonar enables orca pods to map their surroundings, locate prey, and even “see” inside the bodies of other animals—a cetacean version of ultrasound. Through biosonar, orca pods are able to establish their own dialect through the variety of whistles and pulsed calls unique to regional pods. These distinctive dialects frame orca identity, not unlike the role of language and accent in marking human ethnicity.

Female orcas reach sexual maturity around the age of nine and reproduce well into their forties with an average gestation period of approximately seventeen months, followed by a similar nursing period. Female orcas only reproduce every four to five years, allowing deep bonds between mother and calf. In contrast to many mammalian species, female orcas can live long after menopause and often assume leadership roles within their pod. These leadership roles take the form of a matriline, in which older females within the pod hold authority.  These matrilines, in turn, form the building blocks of larger pods—some of which are remarkably stable. With no fixed residence, the only home individual orcas know is their pod, which structures foraging, sleeping, breeding, and belonging, often for their entire lives. Any separation of even a singular orca from a pod yields deep mourning and dismay amongst the highly intelligent and socially-interwoven pod, for the orca pod is a familial unit, perpetually in motion.

Julia Baker is a marketing intern for Oxford University Press.

Jason M. Colby is associate professor of environmental and international history at the University of Victoria. Born in Victoria, British Columbia, and raised in the Seattle area, he worked as a commercial fisherman in Alaska and Washington State. He is the author of The Business of Empire: United Fruit, Race, and US Expansion in Central America.

Animal of the Month: 4 figures behind orca captivation beyond Blackfish

Top 10 facts about the giraffe