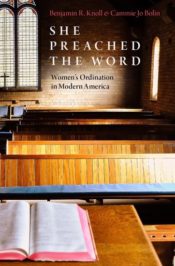 She Preached the Word: Women's Ordination in Modern America

Pope Francis recently appointed three women for the first time to the Congregation for the Doctrine of the Faith, an important advisory body to the Pope on matters of Catholic orthodoxy. He has also recently established a commission for studying the role of women deacons in the early Christian church. While encouraging for supporters of women’s ordination in the Catholic Church, Pope Francis has also made it clear that he is keeping the door firmly shut in terms of the possibility of women priests.

Elsewhere, the Church of Jesus Christ of Latter-day Saints excommunicated feminist activist Kate Kelly in 2014 for advocating for women’s ordination. At the same time, LDS leaders have also expanded roles for women in the faith’s semiannual conferences and global governing committees.

In 2015, Katharine Jefferts Schori ended a historic term as the first female Presiding Bishop of the Episcopal Church, nearly forty years after the denomination opened the priesthood to women. Even in American denominations that have ordained women for decades, however, questions about pay equality and sexism toward women pastors and priests continue.

This ambiguity toward the role of women in American religious organizations is emblematic of wider conversations about gender equality and women’s roles in American society. Thus, understanding the dynamics of women’s ordination in religious congregations can reveal important insights into wider trends and the intersection of gender and leadership in America today.

Here are ten things you should know about women’s ordination in the US:

Cammie Jo Bolin is currently a Ph.D. student in the Department of Government at Georgetown University.

Their book, She Preached the Word: Women’s Ordination in Modern America, is available from Oxford University Press.