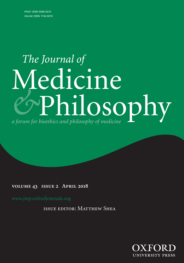 The Journal of Medicine & Philosophy

It is commonly said that necessity is the mother of invention, and this was certainly the case at UCLA Medical Center in 2014. Howard Broadman, then aged 64 and a retired judge from San Diego County, California, was concerned that his grandson, Quinn Gerlach, would be unable to secure a transplant kidney when he needed one. (Quinn had been born with only one kidney, which was only partially functional.) To increase the chance of Quinn receiving a kidney in the future, Broadman proposed to UCLA Medical Center that he donate one of his kidneys in exchange for a “certificate.” This certificate could then be used by Quinn at an unspecified later date to move him to the top of the waiting list for transplant kidneys. The staff at the UCLA Medical Center agreed, and so began the first “voucher system” for kidney procurement.

Broadman’s concern with Quinn’s future was well-founded, for the demand for transplant kidneys greatly exceeds the available supply. In 2016, for example, although over 98,000 people were on the waiting list for a kidney in the United States, only 16,062 kidney transplants were performed (Organ Procurement and Transplantation Network, 2017 ). Different ways of alleviating this shortage have been proposed ranging from the confiscation of usable organs from the recently deceased (proposed by Aaron Spital at the Mount Sinai Health System) to the legalization of direct cash payment for kidneys from living vendors (proposed by, for example, Mark Cherry of St Edwards University and Janet Radcliffe Richards of Oxford University). For various legal and political reasons these proposals have gained little traction outside the pages of academic journals. Broadman’s private innovation was thus, as UCLA put it, a “game changer”. By providing persons close to someone who was expected to need a kidney in the future an incentive to donate one of their organs to a stranger, Broadman’s innovation increased the number of transplants that could be made by encouraging people to donate before becoming ineligible to do because of age or events that unexpectedly render them unfit to donate, and in doing so, created a voucher system.

Yet while the use of a voucher system to increase the numbers of kidneys available for transplant might appear to be an unmitigated good, it still raises some challenging ethical questions. Persons who are expected to participate in such systems as donors are likely to be those who are sufficiently well-educated to navigate their way through the healthcare system. This means that the introduction of such a system is likely to disproportionately benefit persons who are well-educated. Since a high level of education correlates (at least in the United States) with high economic status, this means that the principal beneficiaries of such a program will be those persons who are already relatively well-off. For instance, since high economic status is (in the United States) inversely correlated with being African-American, a voucher system is likely to give persons who are not African-American a relative advantage over those who are. The introduction of a voucher system thus raises a question of equity: Is it ethical to introduce a novel way of enhancing healthcare outcomes if this would be likely to exacerbate current inequalities?

Howard Broadman’s initiation of a voucher system at UCLA Medical Center raises questions that touch on some of the most foundational questions in ethics.

While this first ethical question might lead to an argument in favor of restricting the type of incentive to donate that is the foundation of a voucher system, the second ethical question is whether or not such systems might lead to an expansion of the type of incentives that can be used to encourage kidney donation. To offer potential kidney donors certificates that can be given to persons of their choice that will enable the holder to move to the top of the line for a transplant kidney is clearly the incentive to donate. But, if this type of incentive is held to be both legally and morally acceptable, then why should not other types of incentive—such as direct cash payment—also be considered similarly acceptable? Thus, unless there is a morally relevant difference between providing someone with a certificate to enable someone else to have a greater chance of securing a kidney to incentivize them to donate, and providing someone with a cash payment to incentivize them to donate, the legal acceptance of voucher programs such as UCLA’s paves the way for the legalization of a market in human transplant kidneys.

Howard Broadman’s initiation of a voucher system at UCLA Medical Center raises questions that touch on some of the most foundational questions in ethics—such as whether consequentialist or deontological concerns should trump in situations where they conflict. And these questions, in turn, raise practical questions for bioethicists—such as whether the primary end of medicine is simply the enhancement of health, or whether its operation should be tempered by social concerns external to its practice. Thus, the questions that surround voucher systems show that theoretical ethics, applied ethics, and the practice of medicine should not be addressed in isolation from each other.

James Stacey Taylor is an associate professor of Philosophy at the School of Humanities and Social Sciences, The College of New Jersey. He is the author of the article 'From Directed Donation to Kidney Sale: Does the Argument Hold Up?'

Moral resilience – how to navigate ethical complexity in clinical practice

The ethics of exploiting hope during a pandemic