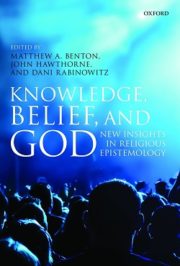 Philosophers studying epistemology debate the exact nature of knowledge, typically by examining the “evidence” behind one’s beliefs: logical processes, sensory perception, and so on. They also wonder about how much we can know. Knowledge about the empirical world is perhaps one thing; yet what about our beliefs in the areas of history, or mathematics, or morality, or politics? Or religion?

Religious belief is subject to constant scrutiny in both philosophy and some popular culture. Should people believe that there is a God or deity of some kind–what kind of evidence or grounds might there be either for or against its, or their, existence? Matters of religion can seem to mimic morality or politics in at least these ways: it can be rather unclear what counts as the right sort of evidence for believing one way or another on some question. And the social nature of our coming to believe (or disbelieve) anything about these domains means that we are largely dependent on testimony from others, and on how we handle disagreements with those whom we respect.

Social epistemology, to its credit, has made enormous advances recently: no longer do philosophers simply consider, as Descartes and other moderns famously did, what I myself alone with my thoughts and my evidence ought to believe.

Social epistemology, to its credit, has made enormous advances recently: no longer do philosophers simply consider, as Descartes and other moderns famously did, what I myself alone with my thoughts and my evidence ought to believe. Epistemologists now reckon with the messy details of how we share our beliefs and knowledge through testimony; how to think about one’s obligations, if any, to modify one’s beliefs when facing disagreement, or how to think about which experts to trust; and how to think about how social factors like gender, race, and class can influence or inhibit the spread of knowledge. In addition, epistemology takes up questions about the nature of “knowledge-how,” and the relation between knowledge and action.

These interests have taken shape alongside important developments in philosophy of language and formal epistemology. Our patterns of ascribing (and denying) knowledge to others is informative for how we deploy the concept of knowledge in everyday life, and for how seriously we take certain skeptical ideas. The formal tools of probability theory have offered new ways of conceptualizing the epistemological terrain, by helping us think more precisely about what evidence is and does, and how it confirms or supports hypotheses. These insights in turn shed light on the epistemological categories of defeat, higher-order evidence, and how an ideally rational agent would respond to new information.

But work in the epistemology of religion has been slow to imbibe many of these new insights and examine where they may lead. Religion is the place where such rethinking can potentially have its deepest impact. One of our aims is to explore these developments and to invite newer questions. For example, how might it be possible to gain knowledge in religious matters given the facts of religious diversity (both within and between religions)? How should we think about the nature of expertise in the domain of religion, especially given rampant disagreement both within religions and between religions? What does formal epistemology contribute to arguments for theism from a universe apparently fine-tuned for life, or for when one might plausibly believe a report of a miracle? How do we gain knowledge about modality (what is possible and what is necessary), and what might this mean for arguments in philosophy of religion which appeal to such modalities? To what extent may practical considerations figure in one’s decision about whether to believe theism (or atheism)?

Such questions, as most philosophers will tell you, are unlikely to have neat and tidy answers. Yet how we go about pursuing such answers enables us to think more carefully and more deeply about religious commitments in ways that can benefit both the religious and non-religious alike.