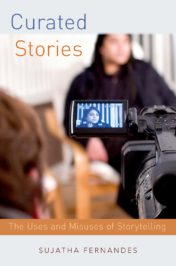 Curated Stories: The Uses and Misuses of Storytelling

In his seminal essay “The Storyteller,” published in 1936, the German philosopher Walter Benjamin decried the loss of the craft of oral storytelling marked by the advent of the short story and the novel. Modern society, he lamented, had abbreviated storytelling.

Fast forward to the era of Facebook, where the story has become an easily digestible soundbite on your news feed or timeline. The popular stories on social media are those that are accessible. Complexity is eschewed in an effort to create warm and relatable portraits of others who are just like us. If modern society abbreviated storytelling, the digital era has eviscerated it.

In recent times, carefully crafted narratives with predetermined storylines have been used in philanthropy, diplomacy, and advocacy. From the phenomenon of TED talks and Humans of New York, to a plethora of story-coaching agencies and strategists, contemporary life is saturated with curated stories. “Tell your story!” has become an inspirational mantra of the self-help industry. Narrative research centers have emerged to look at the benefits of storytelling in areas from treating depression to helping new immigrants build community. An avalanche of books on the topic like Jonathan Gottschall’s “The Storytelling Animal” and Jonah Sachs’ “Winning the Story Wars” present storytelling as an innate human impulse that can help us to navigate life’s problems and change the world for the better.

But are stories really the magical elixir we imagine them to be?

Not in the curated form of storytelling that has come to reign. Curated stories omit the broader context that shapes the life of the storyteller. This was the case with the heartrending stories of abuse told by migrant domestic workers in New York to legislators in Albany as they campaigned for a Domestic Workers Bill of Rights in 2010. At one legal hearing, a Filipina worker related how her employers accused her of stealing a box of $2 Niagra cornstarch. Another spoke about how her male employer frequently exposed himself to his staff. And one West Indian domestic worker recounted that her employer violently beat her and called her the n-word. But these stories – limited in duration and subject to protocols – could not say why migrant women were so vulnerable and undervalued, and why they were forced to migrate for work. Instead, workers could speak only to the technical conditions of their employment. As a result, the stories encouraged the idea that the abuses were the result of a few bad employers who could be reined in by legislation, rather than a vastly unregulated global industry.

If modern society abbreviated storytelling, the digital era has eviscerated it.

The Italian narrative theorist Alessandro Portelli says that when we tell stories, we switch strategically between the modes of the personal, the political, and the collective. The contemporary boom of curated storytelling has involved a shift in emphasis away from collective and political modes of narration toward the personal mode. An online women’s creative writing project features personal stories written by women in Afghanistan. In one piece, Leeda tells the story of fifteen-year old Fershta. The girl is given by her father in marriage to a violent man who beats her and kills her seven year old brother. Leeda concludes that it is the father’s bad behavior that has led to this horrific situation. Other stories blame Afghan mothers for allowing violence to be perpetuated. Because the stories don’t often address the social or political backdrop of war and poverty, we have little means to understand the desperation that might lead a father to pull his daughters out from school and marry them off. As readers, we are helpless voyeurs without an avenue for effective action.

It has become increasingly common for stories to be harnessed for utilitarian goals – like a legislative victory or registering people to vote. For instance, during Barack Obama’s electoral campaigns, volunteers were trained to tell two-minute stories that they deployed when canvassing voters. While legislative campaigns and voter recruitment may be worthy goals, they require that stories be whittled down to a dull and formulaic soundbite that can be delivered in a legal hearing or a recruitment drive. Immigrant families who visited the offices of senators to tell their stories and ask for the passage of Comprehensive Immigration Reform (CIR) in 2010 seemed to be weary of reciting their stories all day long. And it’s not even clear that this strategy works. While activists mobilized to tell stories and extract promises for a bill that would never pass, legislators were busy passing anti-immigrant bills like SB 1070.

One response to this capture of storytelling has been refusal. Some prefer to remain silent rather than give in to the logic of the soundbite, to the reduction of their selves to a blurb that can fit within the lines of a grant application or legal protocol.

Others go off script. They employ their artistic skills to render their stories in all their depth and complexity. One group of domestic workers from the New York-based South Asian organization Andolan said that they did not want to speak any longer about simple narratives of exploitation and victimhood. They said that publicly telling stories of abuse can backfire for workers, who may have a harder time finding work. They preferred to go “off message” to talk about their families or the Liberation War in Bangladesh. These workers want to tell stories about the complicated nature of transnational lives.

Curated storytelling has extended deep into contemporary social life and political and cultural institutions. Curated stories package diverse histories and experiences into easily digestible soundbites and singular narratives of individual victims. The impact has been to deflect our attention from structurally defined axes of oppression and to defuse the oppositional politics of social movements. Perhaps, in response, we should heed Benjamin’s call for  more deeply contextualized and complex storytelling – the slow piling  of thin, transparent layers, one on top of the other – so much needed in today’s world.

Sujatha Fernandes is Professor of Political Economy and Sociology at the University of Sydney. She was previously a Professor of Sociology at the City University of New York. A former member of the Princeton Society of Fellows, she is the author of Curated Stories, Cuba Represent!, Who Can Stop the Drums?, and Close to the Edge. She has written for The New York Times, The Nation, and Dissent, among other publications.