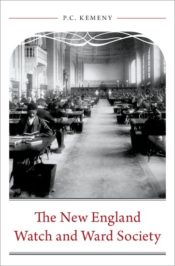 Ninety-two years ago this month, a confrontation took place on the Boston Common between New England’s Protestant establishment and a coalition of secular activists. Representing these two positions were J. Frank Chase, chief agent for the New England Watch and Ward Society, and H.L. Mencken, the well-known Baltimore journalist and editor of the avant-garde American Mercury. Chase had banned the  from sale in Boston because it contained a story about a prostitute, and Mencken came to town to challenge the ban in court. At stake, that afternoon was the role of religion in the public square.

Historians often cast the outcome of censorship debates in the 1920s as the inevitable triumph of progressive enlightenment over Puritan prudery. This narrative, however, masks a critical factor present in the debates. Standing in the Whig-Republican tradition, which dominated New England for most of the nineteenth century, the Protestant moral reformers of the Watch and Ward Society insisted that the state had a responsibility to protect people from immorality.

We typically think of New England’s leading liberals—Congregationalists, Episcopalians, and Unitarians—as progressive, refined, and tolerant. But it was liberal Protestants, not fundamentalists, who formed a vice squad in 1878 because they embraced the Whig-Republican tradition’s communal view of society. This tradition stressed self-discipline and social responsibility and rejected the privatization of religious morality. To Protestant activists, the free market should not determine what books were available to the public. Nor should what people read be only a matter of individual choice. Instead, they insisted, the state must safeguard public morality. These Protestants saw themselves as their brothers’ moral keepers.

Drawing upon the Jeffersonian tradition, the libertarian Mencken contended that state’s central task was to defend individual liberty. A longtime critic of censorship, Mencken sought to subvert the “organized terrorism” of the Watch and Ward Society. To this end, he printed several articles in the Mercury ridiculing the society. After the Mercury published the story about the prostitute in April 1926, an outraged Chase banned its sale.

Chase agreed to meet Mencken at the famed “Brimstone Corner” on the Boston Common by Park Street Church. It was a symbolically significant location. “Brimstone Corner” had acquired its colorful name because seventeenth-century Puritans reportedly spread hot ashes over the area to illustrate the nature of the hell that awaited unbelievers. There, the editor would sell him a copy of the Mercury. Chase would then order Mencken’s arrest, enabling him to test the ban in court.

“I’m Mencken, please nab me,” the writer declared as the onlooking crowd roared. While hundreds of Mencken’s supporters followed the paddy wagon, it was the Protestant establishment that was about to be swept away.

At Mencken’s trial, famed ACLU attorney Arthur Garfield Hays accused the Watch and Ward Society of “attempting to take away the liberty of the majority.” Every effort to make people “moral by law,” he added, had failed. The state’s duty was to defend individual freedom, not promote private morality. The judge found Mencken not guilty.

This revision signaled more than just the decline of mainline Protestantism’s ability to regulate public morality. The debate over censorship brought the conflict between the Whig-Republican and Jeffersonian visions of civil society into public view. These alternative visions of the nature of civil society continue to inform contemporary debates about same-sex marriage, gun control, and other contentious issues dividing American culture.

P.C. Kemeny is Professor of Religion and Humanities and Assistant Dean at Grove City College. He is the author of Princeton in the Nation's Service, The New England Watch and Ward Society, and the co-editor of the forthcoming Oxford Handbook of Presbyterianism.

Isobel and me: medieval sanctuary and Whig history